So, the first official clip from Star Trek Into Darkness beamed down today. Apparently it is not (yet) embeddable, but you can watch it here: 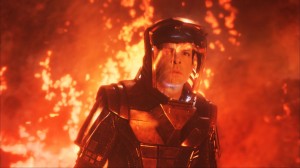 Given that this sequence is excerpted from the preview of the film’s first nine minutes released with IMAX prints of The Hobbit: An Unexpected Journey back in December, I assume Spock somehow survives–if, in fact, he is even in any real danger–Spock “dying” early on in the film is, of course, reminiscent of the opening sequence of Star Trek II: The Wrath of Khan. Given that Quinto’s Spock directly quotes a line from that film in this scene (rather clumsily, too, I say–the screenplay is trying too hard), I wonder “if we’re playing out that scenario now.” Perhaps Starfleet has decided that the newly-minted Captain Kirk really does need to face a no-win scenario?

The environmental suits (?) Kirk, Uhura, and Sulu are wearing are kinda funny looking, but do evoke those used in “The Tholian Web.”

I like McCoy’s dead-on observation that, in this point in Kirk and Spock’s relationship, Spock would no doubt let Kirk perish. It would, apparently, be the logical course of action. I also like (assuming this is a real situation of jeopardy) that Kirk is ready to let the Prime Directive hang. Very true to established Trek form.

UPDATE: It just occurs to me… I wonder if that’s actually how things will pan out? Prompted by the final trailer, I speculated that Kirk might be meeting his maker (no, not Gene Roddenberry!) this time around… What if this is a bit of foreshadowing? It would be none too subtle, but it would work.