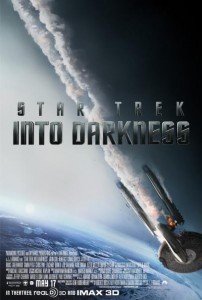 Star Trek Into Darkness is an exciting, suspenseful, action-packed film with outstanding special effects, engaging characters, healthy doses of humor and even some ethical and philosophical questions that harken to the franchise’s origin as a science fiction morality play. Director J.J. Abrams’ take on Trek is, quite simply, a lot of fun, and—

Whoa, whoa, hold it right there, Poteet! You didn’t actually like this movie, did you?

I’m sorry… who are you, and why are you interrupting my review?

Well, that’s what I thought, too, until I heard you singing the praises of this new Star Wars movie.

I dunno, you heard Abrams on The Daily Show the other night; his lips say Trek but his heart says Wars.

Is this some kind of joke?

You tell me! Am I supposed to believe, that you—by which I mean, me—a die-hard Trekkie (that’s right, not afraid to say it!) since 1986, who’s spent who knows how much time (not to mention money) watching and re-watching and daydreaming about and writing about Gene Roddenberry’s landmark sci-fi series—for the Great Bird’s sake, man, you got your Star Trek short story professionally published!—

Do you have a point?

My point? Sure. Of all the fans I have encountered in my travels, you are the most… fickle.

Well, what do you call it? Giving a thumbs up to this pyrotechnic-peppered popcorn flick masquerading as a Star Trek movie?

That’s a pretty broad brush to paint Into Darkness with. Just because it’s different from other Trek doesn’t mean it’s not Trek. I thought we were clear on this back in 2009: Abrams’ Trek is an alternate timeline Trek. Alternate timelines are a tried-and-true Trek element—just think about the Mirror Universe—but the difference here is that we’re seeing the story from the alternate timeline’s point of view, like “Elseworlds” or “What If?” in DC and Marvel comics. So of course there will be differences. 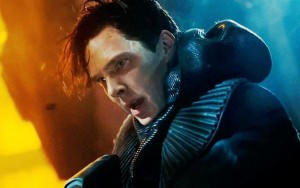 There’s being different and there’s being derivative. Don’t tell me most of the stuff in this movie would’ve been anywhere near as interesting to anyone if it hadn’t had counterparts in real Star Trek. Especially “John Harrison.” If I were making a movie and landed Benedict Cumberbatch as one of my leads, I’d give him more screen time than he got in this thing, and I’d certainly do him the courtesy of creating a new character for him. I thought the whole point of the 2009 movie was to give Abrams and his creative team a fresh start and a blank slate, but I guess I was wrong, because who is Cumberbatch playing? Khan.

Well, they’re both non-Indian guys playing an Indian character. At least Montalban was dark-skinned. Casting Cumberbatch as a Sikh? Another win for racebending. But I interrupted you. You were saying? 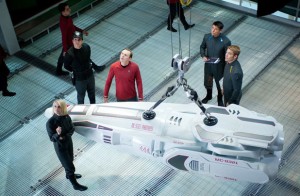 The original Khan was a character who spoke to the 1960s’ fears about genetic manipulation and scientists “playing God.” While those fears are still with us, the new Khan speaks more directly to our post-9/11 fears about terrorism, and what our response to it says about who we are as a society. I think Into Darkness’ best moments come when the characters debate how to pursue Khan. When Scotty resigned rather than blindly follow Admiral Marcus’ hyper-militaristic orders—“Is that all we are now? I thought we were explorers!”—I felt like applauding.

Well, sure, because, until that point, you were worried the filmmakers expected us to cheer on Captain James “Let’s-go-get-this-S.O.B.” Kirk. Admit it.

I do admit it—but I was proven wrong, wasn’t I? And let’s not forget that William Shatner’s Kirk didn’t always perfectly represent Starfleet’s high ideals, either. The first few acts of “Arena” mirror that early portion of Into Darkness pretty closely; if you’ll recall, Kirk is all hot to blow up the Gorn ship, and it’s left to Spock to ask some hard questions—just as Zachary Quinto’s Spock does in this movie. And Shatner’s Kirk is the hero who advocates letting Klingons die at the beginning of Star Trek VI. Both his and Pine’s Kirks, however, ultimately do the right thing. Abrams also told Jon Stewart that he’d done his Trek homework. I think it shows.

If by “homework” you mean watching Star Trek II enough to know which parts to shamelessly grab for his own flick.

What shameless grabbing? Poteet, I’m telling you: Into Darkness is a Star Trek “Elseworlds.” Watching Pine’s Kirk sacrifice himself to save the ship, as Nimoy’s Spock had done, was riveting. Both Pine and Quinto turned in solid performances. Kirk’s admission of fear especially moved me. Remember how Spock told him, in the 2009 film, that the purpose of the Kobayashi Maru test was to know fear? Kirk’s death scene managed to call back not only to Star Trek II, but also to Star Trek ’09.

Solid performances aren’t sterling ones. This movie talks a lot about what good friends Kirk and Spock are, but it doesn’t show us much of that. 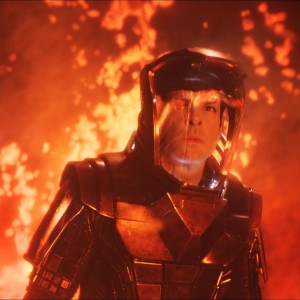 Are you kidding? Kirk breaks the Prime Directive to save Spock’s life, right in the first ten minutes!

And for most of the rest of the show, they’re at odds with each other. I’ll grant that I like Pine as this alternate Kirk, and I like Quinto as this alternate Spock; but they simply haven’t had (and likely won’t ever have) time to develop the fully realized characters Shatner and Nimoy developed. Putting Kirk in that radiation chamber instead of Spock may have been clever, but it wasn’t authentic. All of that scene’s impact derived from its evocation of Star Trek II, not from Into Darkness’ own merits. Abrams’ Trek can’t claim it’s making a fresh start for the franchise as long as it continues to rely on what “old Trek” accomplished. It’s dishonest and disrespectful.

Poteet, do you want Abrams’ Trek to pay respect to “old Trek” (I think it does), or to you personally? Why do you have to be on the defensive about this, as though you’re the sole arbiter of what is good and faithful Star Trek? As I said, I don’t deny that Abrams’ Trek is different. But haven’t you learned anything in all these years as a Trekkie about accepting, appreciating, even celebrating differences? Does IDIC ring any bells? Abrams’ Trek is a good old-fashioned space opera. As much as Star Trek owes to literary science fiction from the likes of Asimov, Bradbury, and Clarke, it also owes something to pulpy, swashbuckling fare like Buck Rogers and Flash Gordon. Abrams’ Trek embraces that part of the franchise’s genetic makeup with gusto.

The same way Vulcans embrace technicalities. I loved that line, by the way.

Oh! So you admit you did like something about Into Darkness?

Several things, in fact. I liked Bruce Greenwood’s return as Admiral Pike (and am sad he won’t be back for any future installments—see, that’s another problem: why couldn’t they just pump Kahn’s super-blood into Pike’s corpse, and—)

Oh, yeah. Well, I also liked the new Klingons, with their pirate-like pierced cranial ridges and their uber-ugly but ferocious birds-of-prey. And Michael Giacchino delivered another fantastic musical score; his theme for Khan is ominous and hauntingly beautiful. I also heartily approve of the opening sequence on Nabiru. From Kirk messing with the indigenous population’s religion to Spock’s logical near-sacrifice of himself for a “primitive” alien people, those opening minutes felt like a big-budget mini-episode of the original series.

Of course, a quick-acting cold fusion bomb is about as preposterous as red matter… or hiding the Enterprise under the sea; I half expected to see Sebastian the crab scuttling across the main deflector dish…

Oh, would you stop that?

What, you have no complaints about Into Darkness, Mr. “Please, J.J., Give Me More” Poteet? 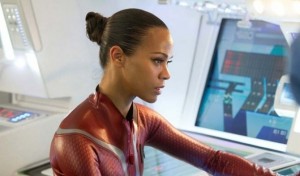 I never said that. I think the film does nothing to advance women in Star Trek, for instance. Zoe Saldana’s Uhura does get to exercise her communications expertise by speaking Klingon, but she spends most of the movie fretting about her relationship with Spock, to the point of initiating a heart-to-heart during a crucially important mission, something no Starfleet professional would do. And Alice Eve’s Carol Marcus could be any pretty blonde guest star of the week. At least Lindelof apologized for the needless underwear scene.

No. Endorsing this movie with any integrity as a Star Trek fan—that’s being difficult.

Look, the bottom line is, they made an entertaining movie.

Right, and no one should expect anything more of a Star Trek production, because Gene Roddenberry was all about setting the bar low at “let’s just be entertaining.”

I don’t think we’re going to make any more progress right now. Maybe we can just agree to disagree, and talk again later?

I suppose. It’s not as though we won’t have opportunities, since—astonishingly—you’ve already pre-ordered the blasted thing from Amazon. At least you took my advice and have stayed away from the monthly IDW comic book series.

Anybody who only knows Abrams’ Trek won’t get that reference.

Well, maybe some of those folk will be sufficiently intrigued to give the original series a chance.

As (the real) Mister Spock is fond of saying, there are always possibilities.