The SFC’s Mike saw Man of Steel and offers these opening night reactions. 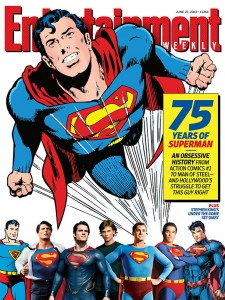 The cover of this week’s Entertainment Weekly promises the issue, in its package about Superman’s seventy-fifth anniversary, will address the topic of “Hollywood’s struggle to get this guy right.” Certainly, as Man of Steel’s release neared over the past many months, Superman fans who were, to one degree or another, dissatisfied with his last adventure on the silver screen (Bryan Singer’s Superman Returns, 2006), have been wondering (and worrying) whether director Zack Snyder, star Henry Cavill, and the rest of this film’s creative team would more successfully bring the Man of Tomorrow to the multiplexes of today.

Is Man of Steel a perfect movie? No.

Is it going to dethrone Christopher Reeve as the definitive cinematic Superman in anyone’s heart and mind? Of course not (nor, I think, does it want to).

But is it a good, even strong, Superman story? Does it “get Superman right?”

From Krypton to Kansas

More specifically, it gets the iteration of the character and his world introduced in legendary writer-illustrator John Byrne’s 1986 post-Crisis on Infinite Earths reboot right. The fact that this movie shares its title with the miniseries that kicked off Bryne’s reinvention of the character after DC Comics’ landmark reset event is, I suspect, no accident. From the first scene to the last, Man of Steel presents us with an emotionally and psychologically interesting hero who inhabits a realistic world—points of contrast with the Silver Age Superman often invoked as strengths of Byrne’s take on the world’s first superhero.

To be clear, the realism doesn’t kick in until we have cleared the film’s opening sequence (too long to be a “prologue,” but too short to be a bona fide “first act”) on Krypton. Man of Steel’s Krypton is, in fact, the Silver Age “World of Krypton” back-up feature on steroids and, depending on how much you enjoyed such weird alien worlds as those in the Star Wars films or John Carter, you will either hate it or love it. Personally, I was thrilled by the sight of Jor-El (Russell Crowe) falling through the air to mount a multi-winged, dragon-esque beast, and I got a charge out of the Kryptonian Council’s way-out wardrobe worthy of 1970s Doctor Who Gallifreyans. This Krypton is an unabashed love letter to pulp sci-fi—but even this sequence begins introducing the elements of Bryne’s Krypton, from such small touches as a cameo by Kelex to the major plot point of the impersonal, genetically deterministic way super-scientific but emotionally bankrupt Kryptonian society conceives its children, against which Jor-El and Lara (Ayelet Zurer) rebel when they bring Kal-El into their dying world (although Crowe and Zurer’s deliver relatively flat performances—more’s the pity in Crowe’s case, since he appears frequently from beyond the grave, a deus-ex-a literal-machina, as the film progresses). Colorful and chaotic, this Krypton is a visual triumph; it grabs your attention from the first frame, and never lets you miss the stately but spare crystalline world over which Marlon Brando presided.

A nice formal cut from baby Kal-El’s rocket entering Earth’s atmosphere to the fishing boat on which Clark Kent is working as a man crashing through ocean waves begins the film’s “realistic” portion (as realistic as most superhero movies that aren’t the Dark Knight trilogy get, at any rate). Yes, as we’d been promised, Cavill brings a certain “darkness” to the role, but by no means is he a tortured soul like Bruce Wayne: he is simply (as so many of us have been, at some point in life) confused about who he is and what he should do. As Byrne’s Clark did in The Man of Steel’s first issue (“They all wanted a piece of me, Pa…”), Cavill’s Clark withdraws from the world, wrestling with his destiny.

A significant departure from Byrne, of course, is that where his Clark received an all-too-eager welcome from greedy human beings when he first revealed himself to help people, Cavill’s Clark is (and has been since childhood) ostracized as a “freak.” Even so, the net effect is that Cavill creates a character who responds to the discovery of his powers in a believable way. What grade school child wouldn’t respond in terror if his x-ray vision and super-hearing suddenly manifest themselves in the middle of social studies class—and what group of his peers wouldn’t regard him as “that weirdo”? (Applause is due child actor Cooper Timberline as 9-year-old Clark.)

Man of Steel scatters realistic scenes from Clark’s Smallville years throughout its length, making the same wise decision Byrne did (as did the classic 1978 film): no fun-and-games career as Superboy here. Lana Lang (Jadin Gould) is present, but a more significant presence and through-line is Pete Ross (Jack Foley as a teen, Joseph Cranford as an adult). (Sharp-eyed viewers who know their TV Smallville may also wonder if the “Sullivan” name emblazoned on a barn in one scene is a tip of the hat to Chloe!) 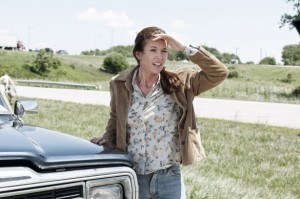 Kevin Costner is serviceable but mostly disappoints as Pa Kent, although he hits the right emotional mark on a few occasions, most notably the scene from the trailer in which he tells teenaged Clark (Dylan Sprayberry—who evidently avoided Jeff East’s fate and didn’t have his voice overdubbed), who has just asked him if he can keep pretending to be his son, “You are my son.” He also manages to “stick” the moment in which he sets Clark’s stark choice before him: “You have to decide what kind of man you’re going to be, because, good character or bad, one day, that man will change the world.” Bu while much screen time is devoted to Clark’s relationship to Jonathan, it can’t hold a candle to his relationship to his mother. Diane Lane makes a brilliant Martha Kent (complete with a version of Ma’s scrapbook from Bryne’s run). She radiates tenderness, humor, and wisdom in all the right proportions, and I fervently hope she returns to keep serving as Clark’s moral compass and sounding board in the sequel.

One of my favorite moments in the film occurs when Superman is learning to fly. He doesn’t take to it right away—and, once he does, he smiles and laughs! He enjoys it! In 1978, Christopher Reeve made a dashing, no-nonsense first flight out of the Fortress of Solitude. It’s an iconic moment, and I wouldn’t change it. But I am glad these filmmakers took a different tack. It further contributes to the verisimilitude of Cavill’s character.

“Welcome to the Planet”

Metropolis gets short shrift in Man of Steel—it exists mostly to be reduced to rubble (quite effectively) in the super-powered duel that is the film’s conclusion—and Superman’s supporting cast who live there are not as fleshed out as they might have been (although Michael Kelly gives us several tastes of Steve Lombard’s boorishness). For all that Laurence Fishburne’s casting as Perry White made headlines, rightly or wrongly, this veteran, accomplished actor is mostly underused. His attempts to rescue Jenny (Rebecca Buller, apparently not, or at least not necessarily, playing a certain familiar cub reporter’s female doppelganger, as some fans feared) from the wreckage of the Daily Planet building do give Perry some welcome heroic moments, advancing the development of the classic Superman theme that our hero exists not simply to rescue human beings, but also and more importantly to inspire them to “super-feats” of their own. As Jor-El tells his son, “You will give the people an ideal to strive towards… In time, you will help them accomplish wonders.” (More on Man of Steel’s messianic overtones to come.) Man of Steel takes a noble cue from Marvel Comics’ webhead (in both 2004’s Spider-Man 2 and last year’s The Amazing Spider-Man) in giving significant on-screen attention to the way in which ordinary people can rise to extraordinary circumstances, even without benefit of powers and abilities far beyond those of mortal men.

As Lois Lane, Amy Adams demonstrates great potential. She is certainly far more plausible as a Pulitzer-winning reporter than was Kate Bosworth. Adams’ Lois is every bit the impulsive go-getter Margot Kidder’s Lois was—they told you not to leave your cabin in the freezing cold, Lois!—but she still conveys a competent professionalism that Kidder did not (a deliberate choice, and not one I fault Kidder for—simply a difference that I observe and appreciate). She is a crack investigative journalist, marking perhaps the first time in Superman cinema that Lois’ interest in who Clark really is isn’t a source of laughs at her expense; instead, the fact that she identifies Clark successfully and early on drives part of the plot, and, in the end, establishes a status quo very much like the latter years of the post-Crisis era, in which Lois not only knew Clark’s secret but shared and protected it as his wife. The “romantic triangle” will not be part of the Man of Steel mythos, and I think that is all for the good, since we can instead watch an honest relationship between the two with room to develop in potentially interesting directions. (It will, however, need far more screen time in future installments to be fully believable; I too often felt that Lois and Clark/Superman were just “hitting the marks” expected of them.)

In Part 2, Mike reacts to General Zod, and ponders some of the movie’s spiritual implications.

8 comments on “Does “Man of Steel” Get Superman Right? — Part 1 (With Spoilers)”