The sci-fi geek community seems “thrusters on full” over this video of William Shatner reading Maurice Sendak’s then-groundbreaking children’s book Where the Wild Things Are to a group of youngsters at the recent Denver Comic Con. His appearance was part of the Comic Book Classroom, an admirable program to get kids excited about books, reading, and the imagination.

Unfortunately, I can’t really imagine that Shatner did that cause any service in Denver. Not only does he embellish a book which needs no embellishment, thank you very much; but, before he reads it, he addresses the kids in the most condescending tone possible, essentially using them as props to play to and get laughs from the grown-ups.

Worst of all, he completely crushes an innocent child’s eagerness to learn. At one point Shatner asks, “Have you ever looked up at the stars? What are they? What are they doing?” But when a little girl raises her hand to answer (as any reasonable person might, when asked a question), Shatner turns the moment into a gag: “What I’m asking is a rhetorical question… I don’t expect you to answer. I’m just asking the questions, the questions you might ask.”

What?!?! In a presentation designed to promote imagination, the exploration of ideas, and a love of learning, Shatner shuts down a teachable moment before it can even get started. Way to kill that sense of wonder, Cap’n Kirk.

Shatner’s appearance reminds me of all the worst “children’s sermons” (a.k.a. “chancel chats,” “sharing faith with our children,” or “a moment for our young members,” among other euphemisms) I’ve ever heard. If your particular congregation is not  familar with this element of the Sunday worship service, let me explain: the pastor, priest or other worship leader calls the children forward and, usually, proceeds to deliver a dumbed-down, cutesy version of the morning message, often using some kind of attention-grabbing prop, almost invariably involving abstract thinking that is developmentally inappropriate for concrete-thinking, grade school-and-under children.

Children’s sermons are also usually rife with rhetorical questions, questions to which the pastor (or whomever) already knows the right, religious answer, and thus doesn’t really care to know what the kids think. A joke oft-told among the ministerial circles in which I moved goes:

The pastor asks the children, “What’s small, brown, and has a furry tail?” The assembled children are silent because they’ve been involved in lots of children’s sermons before and know how things are supposed to go, until one little boy ventures, “I know the answer must be ‘Jesus,’ but it sure sounds like a squirrel to me!”

I’m not saying children’s sermons can’t ever be done well. Goodness knows I tried, following the model of such Christian educators as Carolyn C. Brown and pastors as Brant D. Baker, both of whom have published several good books on the subject of welcoming children into a congregation’s liturgical life. But in good children’s sermons, the pastor does more than play with props, or ask questions the kids aren’t supposed to answer and tell jokes that are really aimed at their parents. In a good children’s sermon, the pastor is fully present with the kids: treating them with respect, as real conversation partners, who have real thoughts and real feelings, and can really answer real, non-rhetorical questions. (In fact, Lutheran pastor Russell E. Saltzman takes the opposite and brilliant tack of “ask[ing] dumb questions trying to provoke smart answers” from the children–in effect, letting them be the Christian educators–rather than “ask[ing] open-ended questions hoping to get something cute the grown-ups can laugh at.” Megachurch Methodist pastor Adam J. Copeland also offered a helpful list of children’s sermons “do”s and “don’t”s to The Christian Century.) 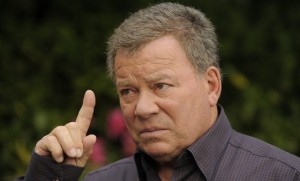 The theology behind the practice of the children’s sermon is questionable at best; but, if you’re going to preach them, please don’t follow William Shatner’s example! Ask real questions, expect real answers, and you may just be blessed with real insights into the Gospel from those whom Jesus welcomed with open arms, and whom he identified as model citizens of the kingdom of heaven (Matthew 19.13-15).

PS. Don’t forget that, even though William Shatner might not have much to teach preachers about ministry with children, Captain Kirk has a lot to teach them about preaching!