Tolkien’s unfinished Arthurian epic is a moving narrative meditation on glory, loyalty, and fate—but not a story of hope. 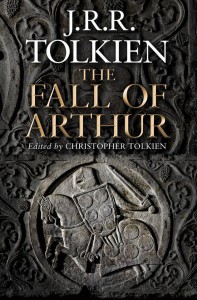 I’ve been a devotee of Arthurian legend since I was eight, when a visiting British relative gave me a copy of Roger Lancelyn Green’s King Arthur and his Knights of the Round Table. A few years later, my fifth-grade Language Arts teacher read The Hobbit aloud to our class, sparking my similarly long-lived fascination with Middle-earth. I was thrilled to learn, then, that an unfinished Arthurian work by J.R.R. Tolkien—a kind of ideal literary Reese’s Peanut Butter Cup—would be published. When my eagerly pre-ordered copy finally arrived last month, it took top spot on my “to read” list.

I still haven’t read the textual notes, commentaries, and criticism which make up most of this slim volume. The poem proper occupies only 40 of the book’s 233 pages; you can (and should) read it in a single sitting, and I wanted to experience Tolkien’s text on its own merits first.

I’m glad I did. Through deft delineation of characters, strategic and graceful exposition, and frequently beautiful imagery, The Fall of Arthur makes the familiar tragedy of Camelot’s demise feel fresh. It also faithfully maintains the Arthurian legend’s tragic emphasis on unrelenting, inescapable fate—and so suggests, within itself, why it remains fragmentary and unfinished.

In form, Tolkien modeled his work after Beowulf (a poem for whose serious critical study he famously advocated). Like an Anglo-Saxon bard, he tells his tale in poetic lines of two “feet” (stressed syllables) separated by a caesura and linked by alliteration, Old English poets’ favorite artistic convention. At first, you may think you’re reading a translated text:

his war to wage   on the wild marches,

over seas sailing   to Saxon lands,

Like Shakespeare’s plays, however, Tolkien’s text rewards readers who stick with it. 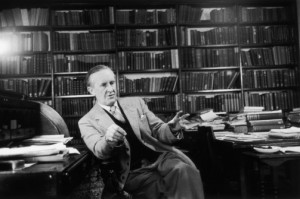 The poem begins, as classic epics do, in the middle of the action. Incited by his treacherous nephew Mordred and urged on by the bellicose but bold Sir Gawain, King Arthur is waging a war of vengeance against the Saxon “heathen” who have long troubled Britain. In Arthur’s absence, Mordred usurps the crown and makes lustful advances against the beautiful but emotionally distant Queen Guinever, who flees Camelot. Mordred pursues, convinced the queen has summoned her exiled paramour, Sir Lancelot. Mordred’s men are instead met by Arthur’s forces, the berserker-like Gawain leading the charge.

The poem stops before Arthur and Mordred meet in final, fatal combat. In its last lines, the king contemplates whether pressing onward is the correct course of action: “Do we rightly choose ruthless onset… / all hope to hazard? My heart urgeth / that best it were that battle waited” (V.55, 59-60). Arthur’s hesitation to fight at the end mirrors and reverses his eagerness to do so at the beginning, forming an artistically and thematically satisfying, if perhaps unintended, inclusio.

While The Fall of Arthur contains a few fantastic elements—Gawain’s ancient, enchanted sword, for instance, or a prophecy of doom at Lancelot’s hands that Mordred fears—it focuses far more heavily on its characters. My synopsis above admittedly glosses over the fact that the poem is a “slow burn.” When action comes, it matches any warfare waged in The Lord of the Rings—

and ropes were riven.   With rending crash

—but the work’s real “action” is mental and emotional. Tolkien takes time to unfold his characters’ feelings and motivations, investing his modern epic with a psychological depth that ancient epics like Beowulf lack.

Consider, for instance, Sir Lancelot’s divided loyalties. Of the knight’s relationship to Arthur, Tolkien writes, “to his lord alone his love giving; / no man nor woman in his mind holding / dearer…” (III.34-36). A few lines later, however, Tolkien writes, of Lancelot’s relationship to Guinever, “To his lady only was his love given; / no man nor woman in his mind held he / than Guinever dearer” (III.41-43). Tolkien’s virtually verbatim repetition of the wording may be mere rhetoric (if there is such a thing), but I can’t help but think he means it to suggest that Lancelot is experiencing more than the norm of courtly love, in which a knight might be both “loyal to his lord” (III.46) while “proudly serving / Queen and lady” (III.49). Lancelot is a man truly torn, which is one reason the situation is tragic—quite apart from his and Guinever’s moral culpability, which Tolkien does not ignore or idealize: “Strong oaths they broke” (III.62). 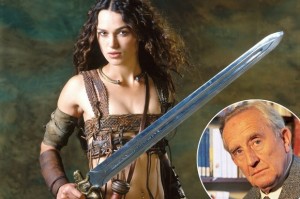 From “The Sunday Times” (http://www.thesundaytimes.co.uk/sto/news/uk_news/Arts/article1142340.ece). What would Tolkien have made of Keira Knightley’s 2004 Queen Guinever?

Tolkien’s characterization of the queen, however, is questionable. She is repeatedly described as emotionally distant, even cold:  “Guinever the golden with gleaming limbs / as fair and fell as fay-woman / in the world walking for the woe of men / no tear shedding” (II.27-30). And I think Tolkien places most of the blame for the affair on Guinever’s golden shoulders. He mentions again her ruthlessness (III.54) as he describes her greed for Lancelot—“Fair she deemed him / beyond gold and silver to her grasp lying” (III.58)—a greed to which, the text infers, the hapless Lancelot could not help but succumb. While their relationship crumbles in the bloody aftermath of Lancelot’s rescue of Guinever from the stake (a psychologically realistic insight into the effect of guilt on their illicit love; see III.95-107), the knight never breaks free of this fifth-century femme fatale’s spell:

Dear he loved her.

Though in wrath she left him,   no ruth showing,

no pity feeling,   proud and scornful,

Anyone ever caught in the throes of unrequited loved may recognize such dynamics, but portraying Guinever as Lancelot’s harsh mistress, while not unique to Tolkien, seems to reinforce many readers’ view of him as, if not misogynistic, than at the least unsympathetic to women.

More compelling is Tolkien’s characterization of Mordred. Tolkien’s Mordred is an intimidating, dangerous, truly bad guy, driven by lust and ambition, as heartless in his way as Guinever is in hers: “O’er the weeping world waking coldly /he leant and laughed, lean and tearless” (II.44-45).

What keeps Tolkien’s Mordred from descending into cartoon villainy is the conviction he shares with Arthur and Gawain, our ostensible heroes, that fate can be defied. As he prepares for the eventuality of war with Arthur, Mordred, we are told, “watched and waited / and the wind studied” (IV.60), as though he remains in control of his destiny. He does not realize the truth of words he spoke earlier to Guinever: “Time is changing… / The world falters. / New tides are running in the narrow waters” (II.147-150). Arthur, likewise, embarked on his campaign against the Saxons at the poem’s outset as “a last assay / of pride and prowess,” a “war with fate” (I.15-17), not knowing that, in fact, “fate fell-woven forward drave him” (I.18), not appreciating until too late “that his house was doomed, / the ancient world to its end falling, and the tides of time turned against him” (I.177-179).

Turning tides, shifting winds, howling wolves—these images recur throughout The Fall of Arthur, emphasizing Camelot’s ultimate futility. Whatever ending Tolkien had planned, it likely did not include any note of optimism, however tenuous, such as the one that comes at the close of the Broadway musical Camelot. Even Gawain and Arthur’s rousing military victory in the present text’s final action sequence is denied the chance to offer hope:

as the star of noon   stern and cloudless

o’er the heads of men   to its height climbing

No eucatastrophe waits for Arthur and his knights as one did for the last defenders of a Middle-earth free from Sauron’s tyranny. This is, after all, The Fall of Arthur—not only his dramatic end, but also his personal autumn, the season of fading glory and strength that, while not without its beauties, always and only serves as a prelude to winter, and death.

Perhaps this is why Tolkien’s Arthurian epic remained unfinished? No telling of the Matter of Britain can contain a eucatastrophic “happy ending” without doing irreparable violence to the legend. Not even the promise of Arthur’s return as “the once and future king” changes the fact that Camelot fell, as even our best “brief shining moments” must, because we are both mortal and sinful.

I’ve read in years past that Tolkien never really took to Arthurian legend because, as Arthur is an explicitly Christian king, his Camelot cannot be a fully realized “subcreation.” Christianity, a real-world religion, cannot belong in an internally consistent fantasy world. But what if the real reason Tolkien never fully embraced Arthurian legend was because the legend’s basic arc, bending as it does (and as Tolkien here faithfully renders it) toward dread and despair and doom and death, cannot be a worthy vessel for the hope and light and life of the Gospel? 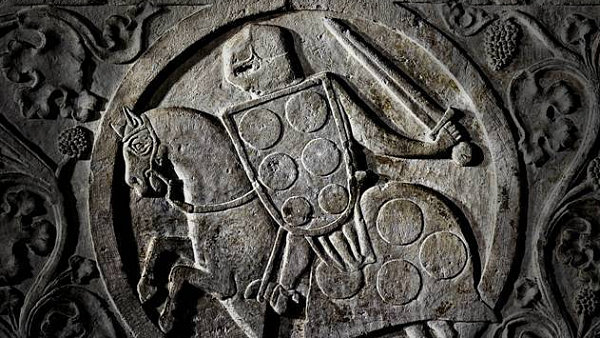 UPDATE: Having just started to read the notes to Tolkien’s text, I find I had forgotten a tradition that Sir Gawain’s strength increases until noon and then declines, which is undoubtedly the point of IV.223-226, quoted above. Ignoring a text’s critical apparatus, when present, is sometimes perilous! All the same, I think my interpretation of the lines as a deliberately ambiguous reference to the fate of Gawain, Arthur, and even Camelot itself survives my lapse of Arthurian memory.

Photo of Tolkien at his desk from The Daily Beast, May 23, 2013; http://www.thedailybeast.com/articles/2013/05/23/tolkien-s-unfinished-epic-the-fall-of-arthur.html.

Montage of Keira Knightley and J.R.R. Tolkien from The Sunday Times, October 7, 2012; (http://www.thesundaytimes.co.uk/sto/news/uk_news/Arts/article1142340.ece).