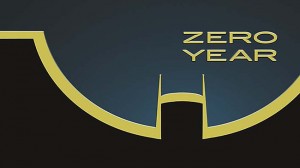 Batman begins—again! DC Comics is filling in the gaps of the Caped Crusader’s past in the New 52, and Dan and Mike are here to talk about whether “Zero Year” achieves that goal.

Does this issue represent Batman well?

Mike: I suppose. It might be more accurate to say it’s a good representation of Bruce Wayne. We meet him as the young heir to an industrial fortune who is taking advantage of the fact that the world believes him dead. Even without the bat-cowl, however, he is working to fight crime, although now he finds himself up against a new kind of evil. As he tells Alfred, the Red Hood Gang is “a new kind of crime… Nothing like the street crime that was running rampant when I left the city years ago.” I suspect this new challenge will lead to Bruce’s adoption of the Batman persona. The issue also gives us glimpses of Bruce as a young boy, interacting with his father. Although Snyder doesn’t handle his flashbacks as smoothly as one might hope, we do see that Bruce loves his dad and, also important for Batman’s developing mythos, loves Gotham City.

Dan:  I feel that this story represents Batman well, and I believe it is a good introduction to the Scott Snyder/Greg Capullo run on the title for anyone who has not picked up the series yet. I think it could be a better story, but it is a better than average issue (when comparing to other comics and not the awesome average Snyder/Capullo issue). This is a creative team that comic book fans should be aware of. Regardless of how I feel about Snyder’s initial take on Superman, his stories are gold.

Does the issue conform to canon?

Dan:  The point of “Zero Year” is to give Snyder the reward of creating significant Batman canon. DC keeps comparing this story to Batman Year One. The reason DC keeps making this claim is simply that they want us fans to recognize Snyder’s story as canon. Yes, boys and girls, welcome to what Batman was doing before Batman was truly public and Bruce Wayne was still dead! Along with Batman getting new backstory elements, I am guessing some villains will, too.   This story takes places six years ago, which I believes places it a year before the start of the New 52—hence, “Year Zero.”

Mike: You’ve got the chronology correct, Dan. I think it does seem to conform to the New 52’s canonical contours, but as one who isn’t reading any of the current Bat-books, I more appreciated the ways this issue establishes other elements of Batman’s lore that cut across continuities. The Wayne Enterprises building, for example, not only has the giant penny outside its front doors that will someday reside in the Batcave (forged, we are told, by Bruce’s uncle, Philip Kane—a not-subtle but still nice tip of the hat to Batman creator Bob Kane) but also cuts an impressive, bat-like figure in the Gotham skyline at its top.

Dan: It amuses me that Capulla draws Bruce Wayne with a baseball cap with an “R” symbol that looks a lot like the Robin symbol.

Mike: I noticed that, too! And the Lincoln automobile we see Thomas Wayne working on in a flashback looks more than a little like the first Batmobile, from the 1940s; appropriately enough, we’re told it’s a car that has “a touch of demon to it.” Even one of Batman’s sometimes underappreciated talents, his expertise as a master of disguise, is on display in these pages—doesn’t the mask we first see Bruce wearing look like the classic “Matches Malone” get-up?

Dan:  I find myself more excited about the villain back story elements being added to canon than the Bruce Wayne elements. I think we have a basic idea of the sorts of things Wayne was doing before he returned from his training. I do not think we will be overly shocked by Wayne’s activities. It is not like we will find out that he used guns to murder innocents in Gotham City. It is not like we will find out that he and Poison Ivy had a love child named Mistletoe (I totally made that up). No—Batman is going to be Batman. But the villains? That is somewhere Snyder can play. The closing pages hint at one established member of the Rouges Gallery getting his story tweaked, and when I saw him, I got really excited, mostly because I want to see how Snyder uses him. And let us pay attention to the Red Hood. I am guessing that he is a villain we already know. I am already placing bets to who I think he is, but I also except that Snyder will change everything by going in a different direction than I am planning. 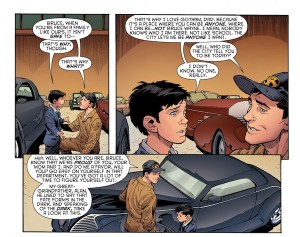 Mike: I actually liked the human moments involving Bruce the best. I liked seeing him gently bickering with ever-concerned Alfred about why he (Bruce) wants to remain legally dead in society’s eyes (and trying, unsuccessfully, to get Alfred to drop the “master” talk: “Just call me Bruce, will you?”). I also liked seeing Bruce and Thomas Wayne interact in an unusual setting: we first see Thomas, not working as a doctor (though he is still that) or moving through high society (though it’s clear he still does that, too), but in the cavernous Wayne garage, working on classic cars. It’s a nice touch that makes Thomas more fully developed as a character.

Mike: The design of the Red Hood Gang in the “year zero” time is simply ridiculous. Its members look like giant Tylenol capsules gone bad. (Their masks in the “six years ago” time frame are more arresting—their masks there look like angry, open fangs, and the “empty” red space even acts as a visual reminder of Batman’s logo, ironically.) I also question Batman’s action, in the “six years ago” sequence that opens the issue, of killing the Red Hood gang member with a spear to the back of his head. Granted, Batman saves an innocent child; but has the New 52 established Batman who is a hero who is willing to kill? His action here seems less controversial to me than Superman’s at the end of Man of Steel; and Batman, too, in his early history, was known to kill off bad guys; but, generally speaking, he is, like Superman, a hero who finds other ways. The fact that this incident takes place at the issue’s beginning jarred me, and left me with a slightly sour taste for what was to come. I ended up enjoying the story overall, but still wondering whether the creators wish this particular Batman were more like Wolverine or the Punisher.

(Incidentally, another minor nitpick: the “CENSORED” box when Bruce flips the Red Hood Gang the bird in the opening action sequence really pulled me out of the issue for a moment!) 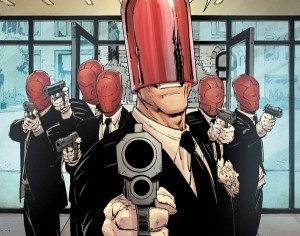 Dan:  I have more of a worry. I am worried that “Year Zero” will be popular enough that Snyder will continue to write only story arcs from this period.  I really do not mind this voyage back in time, but I do want Snyder to write stories in the present also. It is so tough to write an opening issue in a comic or an arc.  This is the introduction of a longer story so it does not have the pacing that we can expect to see in the future.  And since there has to be a lot of setup, the reader is probably not as involved in the story as we will be in the future.  Honestly, one of the best ways to read a Snyder story is in a trade, so you do not have to wait for the next part of the story.

Do you see spiritual applications in the story?

Dan:  Can anyone say prodigal son?  Does Alfred give Bruce a robe? Okay, classic Daniel reaching moment here. One of the characters states to Bruce (my paraphrase) that some people have to give up things they want to do to do the things they are supposed to do.  Now I think there is a nugget of truth in there (despite this character potentially having a dubious background).  This very much sounds to me like this little nugget from 1 Corinthians:

Yeah, it sounds pretty silly coming from me, a man who writes about comic books. But as a father and husband I do understand that I do not always get to do what I want to do. Sometimes, oftentimes, there are tasks that I must do in order to benefit from holding those roles. I need to support my family.  And Bruce Wayne must protect his city! 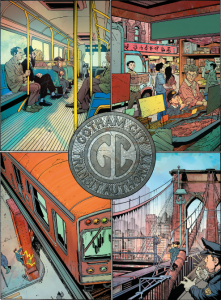 Mike: Funny you should mention cities, Dan! I found a possible spiritual theme developing is in the issue’s “thesis question,” so to speak, that Thomas asks his son: “What do you love about the city, Bruce?” Young Bruce spends his days roaming Gotham incognito. Dr. Wayne warns his son, “When you’re from a family like ours, it isn’t safe” to do so, but Bruce tells him he wants to because Gotham City “is a place where you can be anyone.” Jesus calls his followers to love the cities where they live, but not because urban settings allow anonymity and reinvention; rather, cities are arenas in which we can live as God’s agents. As God told the exiles through Jeremiah, “[S]eek the welfare of the city where I have sent you… and pray to the Lord on its behalf, for in its welfare you will find your welfare” (Jeremiah 29.7, NRSV). Christians cannot remain aloof and isolated from the civic communities in which they live. We are to be in the midst of them as mediators of God’s blessings, for “God is in the midst of the city” (Psalm 46.5a, NRSV). Even as we are citizens of heaven (Philippians 3.20) who desire a better, heavenly homeland (Hebrews 11.16), we are to live, work, and play in our earthly cities so that they may, by God’s grace and the Spirit’s power, more and more resemble the holy city to come, “the new Jerusalem, coming down out of heaven from God” (Revelation 21.2).

Will you be sticking with this series?

Mike: I won’t be reading it as it is published, but I might read the collected edition at some point. While Snyder is telling an enjoyable tale, nothing about it is so new or so gripping that I feel I must know what happens, as it happens.

Dan:  I am undecided! I will read this entire storyline at least through borrowed trades. I am glad to have part one in my short box. But with me following three other series on a regular basis and grabbing up issues with S.H.I.E.L.D. appearances, I just don’t know if I will pick-up issue 22.  If you sat on top of me and forced me to answer—

Now get off of me! I bruise easily!