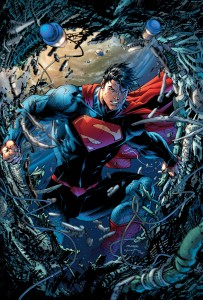 With Man of Steel doing superheroic business at the box office and Superman in the public eye celebrating his 75th birthday, it’s a great moment for DC Comics to launch a new Superman book. Written by Scott Snyder and drawn by Jim Lee, does Superman Unchained seize that moment well? The SFC’s Dan and Mike have opinions, and they aren’t afraid to share them!

Do you feel this story represents Superman well?

Dan:  Yes, overall I think this is a typical Superman book where Superman behaved as required within the rules of the New 52.  Wow, holy concise answers, Batman!

Mike: Snyder wisely doesn’t waste anyone’s time revisiting the doomed planet Krypton or the wheat fields of Smallville. After ironically tweaking, in his teaser, one of the most famous catchphrases associated with Superman, Snyder gets right to the hero himself, showing him at his action-packed best as he rescues a space station that’s plummeting to Earth. The sequence also lets Snyder establish Superman’s concern for others, quick thinking, and gentle wit: for example, he tells two astronauts as he pulls them out of the wreckage, “First, get some medical attention. Second, go celebrate. By my calculations, you and your partner just broke about seven Guinness records with that fall.” Snyder knows the Man of Steel. By the end of this issue, you’ll feel like you’ve gotten to know him all over again, too.

Did this story conform to canon?

Dan:  Mike, you are more of a Superman guy than I am, so I will follow your lead on this topic.  I did not see anything that I thought varied greatly from the characters of Jimmy Olson, Clark Kent, Superman, Lois Lane, General Lane or Lex Luthor as based on the foundation of the New 52.  Since we are still just in the first two years of the New 52 there is room for canon to be created.  And I feel like the ending of the book is a first hint that canon-making will be occurring during this year of Superman’s 75th birthday.  But in this volume itself I feel like nothing was added to or subtracted from Superman. 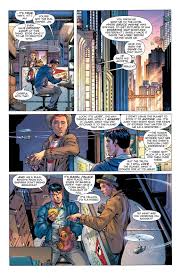 Mike:  Right on all points, Dan. Snyder’s story is set within New 52 continuity. Clark Kent, taking a stand against the slipshod reporting being forced on the Daily Planet by owner Morgan Edge, is an independent news blogger, covering (as he says) “human angle pieces, stories that see the big events through lived experience.” I like this development in the Superman mythos. I assume it’s a temporary situation—Clark and the Planet belong together as much as Kirk and the Enterprise, or the Doctor and the TARDIS—but it recasts Clark’s “never-ending battle for truth and justice” in a way that feels right for our culture’s largely laughable attempts at “journalism.” By setting his story in the current canonical status quo, Snyder also has a good excuse to bring Lois Lane and a genuinely funny Jimmy Olsen into the mix.

Dan:  I liked the cover by Jim Lee. I felt it was dynamic and full of energy. And I felt that this energy level was not felt in the book—whoops, wrong question!

Mike: Oh, boy, here we go. Superman haters gonna hate… That’s so Sci-Fi Christian party line, all about the Batman… Or the Aquaman… Or the ninjas…!

Dan: I am not a Superman hater, Mike! In fact, I like the idea of Scott Snyder, who hits home run after home run with Batman stories and American Vampire teaming up with Jim Lee to create stories for the other icon in the DC Universe.  Jim Lee illustrated some of the first Uncanny X-Men books that I ever read. So this idea seems like a win-win for me. But for this single first issue, I liked the idea better than I liked the actual payoff.

Mike:  Well, at least one of us enjoyed the execution as well as the premise! Snyder has set up an intriguing story that hinges on the revelation of a secret regarding the bombings of Japan in 1945. Lee’s dynamic artwork and Alex Sinclair’s vibrant coloring help bring that story to life. Check out, for instance, the gorgeous pages 16-17, on which Superman’s investigation of the issue’s central mystery takes him deep underwater. The issue is well-written, nicely paced, and dramatically drawn—what’s not to like?

Dan:  “What’s not to like?” Mike, where do I begin?!  First, I was not in love with the story. The story is okay.  But this is a #1, and Superman is now “Unchained.” Big Blue is off the hook, so this has to be epic! Yes, we finally get Superman battling against the scourge of falling space junk! Yes! It has finally happened! 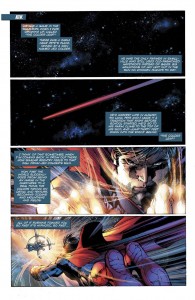 Mike: Your sarcasm is duly noted. Hardy har har. Are you forgetting that the plummeting space station is the eighth piece of space junk to fall in one day? That everyone suspects terrorism may be afoot?

Dan: Calm down, Mike! Don’t go all Doomsday on me! Again, the story is okay. But with a team-up of Snyder and Lee I expected something awesome. But if I have learned anything this summer, it is that anytime I raise my expectations they get dashed.

Second, I hate the poster page. So there is a poster inside the issue. When you unfold the poster you can read a few pages of the story. Of course, you need these pages if you want the story. So if you want to hang up the poster, which I had no interest in doing, you need to buy two copies, because once you pull out the poster, the story will not be complete when you choose to re-read the issue. Now, the first time I heard Jim Lee talk about this, it sounded pretty interesting. But instead I was frustrated as I unfolded the poster while trying to keep it attached to my issue. I believe that Snyder and Lee were trying to give us something fun, instead it was something frustrating!

Mike: I honestly agree with you on this point. It is the one thing I disliked, and you’ve summed up the reasons why, so I won’t rehash them. Either this poster was conceived of as a marketing stunt to justify the $4.99 (!) cover price, or a way to suggest that this Superman can’t even be “chained” by the confines of a floppy; but it’s annoying, not exciting.

Dan: Funny you should mention that price point, Mike. Why $4.99? Is it, as you suggested, because of the poster?  Is there an extra page count I did not notice? I know it has more pages than Aquaman at $2.99. But I feel like they were secretly trying to sneak up the price on me. So as I started to think about cost, I started to wonder, is “Channel 52” part of the page count? Because if it is part of what I am paying for I am tired for paying for it in multiple issues every month and feel really ripped off since in Superman Unchained my unofficial math indicates I spent $1.27 for these pages!

Dan:  Can I just get lazy and say that Superman is the Son sent from above to Earth to save mankind? Yeah, I never use that one!

Mike: I don’t think it’s lazy to admit that this issue doesn’t have any dominant spiritual issues. Sometimes a comic book is just a comic book! I suspect the finished tale will raise some hard moral questions regarding the proper use of power. In addition, the name of an as-yet unseen “cyber terrorist group,” Ascension, carries clear theological connotations. For Christians, Jesus’ ascension into heaven is our guarantee that true humanity is, now and forever, part of the innermost life of God. It is Jesus’ promise that he will take us to himself, that where he is, we may one day be also (John 14). Until we see these terrorists and learn of their agenda, however, it’s impossible to know if that name carries any deeper meanings in Snyder’s story

Dan:  Nope. I was far from impressed. Now, I will borrow it from the library when it is collected: first, because I read everything Scott Snyder writes; and second, because I read everything. Seriously, I am currently reading Legion of Superheroes: Volume 2: The Dominators. If I will read that title, I will happily read the collected Superman Unchained.  But I will not pay the freight on this title on a regular basis when I can get Aquaman for $2.99 (even if it has “Channel 52” advertisements in it). 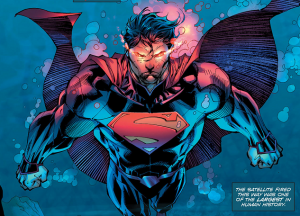 Mike: For my part, I am absolutely on board for this series as it is published. Man of Steel was a good Superman movie, but it got me hungry for a story starring the Man of Tomorrow that is not an origin story, but another epic adventure in his career. I think that’s what Snyder and the rest of the creative team will be delivering in Superman Unchained, and I’m looking forward to it!

4 comments on “Issues of the Day: “Superman Unchained” #1”