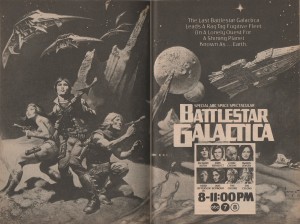 My mother was the first person to tell me about Battlestar Galactica. “You’d probably enjoy that,” she said, pointing to the ad in the newspaper’s TV listings for September 17, 1978. “It looks like it’ll be a lot like Star Wars.”

Mom was right on both counts. And while Battlestar’s visual and thematic similarity to Star Wars is what defines (and damns) it for many viewers now, those qualities made it as welcome to this Star Wars-starved six-year-old then as fresh tylium to a fuel-depleted Colonial Viper.

Battlestar was part of my childhood—only briefly, but long enough for me to have strong memories of poring over its picture storybook as though it were The Book of the Word, scrawling multiple sketches of its characters and ships (some of which are reproduced in this post for your entertainment, no extra charge), and pretending during nighttime car rides that I held a Viper control stick in my right hand, and that the headlights of oncoming traffic were Cylon Raiders closing in for the kill. Engage turbo engines! Fire laser cannons!

As quickly as Battlestar came, it went. I watched the short-lived (rightly so) follow-up series Galactica 1980 a few times and, though I thought the  Colonials’ flying motorcycles were cool, the arrival of The Empire Strikes Back that same year reclaimed the primacy of George Lucas’ galaxy in my imagination. Larson’s rag-tag fleet could no longer compete.

I caught a few old episodes on the Sci-Fi Channel in the late 90s, but not even Ron Moore’s reimagining of the property prompted me to revisit it. Recently, however, I started wondering whether the original show could hold any value for me beyond the sentimental. Could I watch “Galactica 1.0” and find reason to appreciate it on its own merits?

Armed with DVDs of the three-episode pilot movie, “Saga of a Star World,” and a few early episodes, as well as with an open mind, I decided to find out.

The show still reminds me of Star Wars, of course. Even the stylized font of its opening credits evokes the Star Wars logo. Composer Stu Phillips deserves kudos, however, for writing a main theme that does more than ape John Williams’ work. While equally big and brassy, Phillips’ music breathes with a sweeping sense of longing all its own, and entirely appropriate to the series’ subject matter. 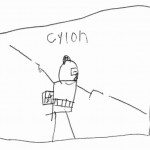 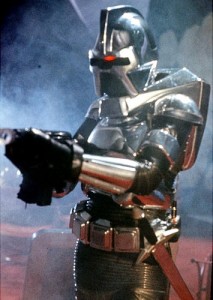 Generally speaking, Battlestar still looks remarkably good. The title vehicle is an impressive, fairly
plausible aircraft carrier in space. The Cylon centurions were no doubt meant to mimic Star Wars’ stormtroopers, but emerge as more interesting. The little red light that runs along their eyeslits has always fascinated me, and their heavily synthesized voices truly are the sound of humanity’s worst fears about technology, almost as creepy, even now, as the voice of the Borg Collective.

Not every aspect of the special effects holds up. For example, one alien race from “Saga,” the Ovions, cut a ridiculous figure, looking like they have just wandered in as refugees from a Doctor Who story across the pond with an especially paltry budget. But legendary special effects wizard John Dykstra, who worked on Star Wars as well as Battlestar, gave television audiences something that resembled that blockbuster movie more than anything yet seen on the small screen. Today, when we watch computer-generated cosmic spectacle on a regular basis, it’s easy to scoff at Battlestar’s relatively simple and frequently repeated effects shots. In 1978, however, these scenes marked a new level of technical expertise for weekly TV.

Besides, I still think the models of the Vipers and the Raiders are elegant. They seem to be speeding forward even when at rest. I never owned, and never really wanted, a toy TIE fighter, but I desperately wanted (and even now wouldn’t mind having) a Cylon Raider. 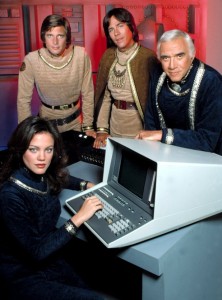 People also often criticize Battlestar’s acting. It is hard to pretend any of the cast turns in a truly remarkable performance. As that painfully earnest paragon of virtue, Captain Apollo—all the fresh-faced optimism of Luke Skywalker, saddled with the almost sanctimonious moral certainty of early-TNG Wesley Crusher—Richard Hatch is generally uninspiring. He does manage a few genuinely warm moments with Jane Seymour’s not-long-for-this-series Serina and his soon-to-be adopted son Boxey, played by Noah Hathaway (better known as Atreyu in The NeverEnding Story, now busy designing and riding custom motorcycles—no word on flying ones), but Hatch doesn’t create an Apollo who can be both heroic and human. Watch “The Lost Warrior,” a misguided homage to the spaghetti western tradition (complete with Cylon gunslinger) to catch Apollo at his better-than-anyone best. Even in that episode, however, Hatch delivers a “moral of the week” line about killing with surprising authenticity. Flashes of the fine actor he’d become by the time of the BSG reboot do show through from time to time.

I’ll admit that, had I been a few years older at the time, I would have had a big crush on the beautiful Ms. Jensen, a model who was making the move into acting. Like most of the cast, she gives the scripts her best shot, but that’s an often thankless task. “Whatever happened to the joy of living to fight another day?” Athena asks her father at one point—an astonishingly inappropriate question considering most of the human race has been annihilated only days earlier. 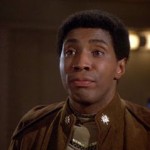 Among the other supporting players, Herbert Jefferson, Jr. makes the most of meager script material as level-headed, likeable Boomer. For instance, his and his fellow pilots’ attempts to throw Apollo a bachelor party while avoiding Colonel Tigh’s watchful eye in “Lost Planet of the Gods” are pretty endearing. Boomer’s the ideal big brother: level-headed and in control during a crisis, but able to loosen up and laugh with you in good times. And I’d be remiss if I didn’t praise John Colicos for chewing the scenery with every ounce of over-the-top villainy he can muster. His Baltar is a campy cartoon villain, no question. No moral ambiguity here—“I’ll get you! You haven’t heard the last of Baltar!” he shouts from beneath the ruins of a temple on Kobol—but, frack, is he fun to watch! 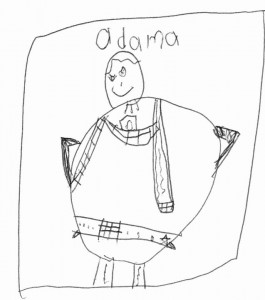 As the Galactica paterfamilias, Lorne Greene brings a gentle gravitas to the role of Adama. I enjoy him most in his grandfatherly moments—telling Boxey bedtime stories about Earth, for example, in “The Lost Warrior”—but he is on occasion also capable of tapping into the trauma his character has just lived through to powerful effect. Watch him admit to Athena in “Saga” that the burden of leadership is weighing heavy on him. “You didn’t see them down there,” he tells her, speaking of survivors on Caprica’s surface, “their faces—the old, the young—desperate, begging, screaming for a chance to come aboard—a chance to live—and there I was like God, passing out priorities as if they were tickets to a lottery.” This glimpse of Adama’s private pain (which Greene played with even more raw emotion in an unused take, preserved in the DVD’s selection of deleted scenes) adds texture to his public persona as the confident, decisive commander of the fleet. Had scriptwriters taken more seriously the implications of their premise, Greene and the rest of the cast would have had more resources with which to create consistently emotionally resonant characters.

Tomorrow, Part Two will consider some of  Battlestar’s themes and spiritual applications as potential sources of its staying power.