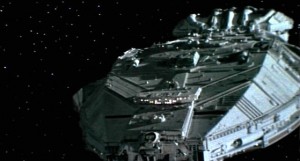 Did I find anything of lasting value in the original Battlestar? Absolutely. There are good reasons many viewers welcomed the rag-tag fleet into their imaginations and their hearts. I think one is that Battlestar showed a wide television audience, for the first time, that science fiction could sustain somber and serious reflection on the challenges of life in community.

I realize this suggestion may sound like so much felgercarb. After all, this is the show that featured a robot dog called Muffy! But sci-fi fans can look past futuristic, fantastic trappings to appreciate messages and meanings underneath. Even as Battlestar never forgets its main purpose is to entertain, its interest in the nature of community offers plenty to think about.

The voiceover that begins each episode sounds the theme of community. Its suggestion that “life here began out there” invites audiences to view the Colonials sympathetically, as “brothers of man.” This narration is partly a relic of popular “ancient astronaut” speculation from the 1970s. But as an expression of a given truth in Galactica’s mythos, it also creates solidarity between the show’s audience and its characters. These are our cosmic cousins! This is our family!

And our family’s in trouble, “fighting to survive, somewhere beyond the heavens.” Galactica’s premise set it parsecs apart from previous mass media science fiction. This series started with the genocide of a dozen populated worlds. That’s a 180-degree turn from the optimistic premise of Star Trek. It resonates a bit more with the plight of the Rebel Alliance in Star Wars, but is an existential catastrophe several orders of magnitude greater. Foregrounding such dire straits, week after week, as your onscreen world’s defining reality? That’s gutsy.

Battlestar is not as relentlessly grim in drawing out the implications of its dystopian setting as the reimagined series, but it makes more of the premise than I remembered.

Consider the character of Sire Uri, played in the pilot movie by Academy Award winner Ray Milland. Uri embodies the excesses of selfish individualism. While many in the fleet starve, Uri and his cronies sequester themselves in a starship’s luxury suite, hoarding gourmet food and drink. Discovered by Apollo and Boomer, Uri insists he will not share: “This food belongs to me and my guests.” After attempting, unsuccessfully, to shame Uri into doing the right thing, Apollo makes the executive decision to distribute Uri’s stores as far as they will go. When Boomer asks Apollo whether he overplayed his hand, Apollo replies, “How do you overplay starvation?”

Apollo’s rebuke of Uri reminds me of how ancient Israel’s prophets rebuked those who grew fat and rich while their neighbors starved and suffered. Amos, for example, preaches against “you cows of Bashan”—a strikingly unflattering image of self-indulgence—“…who oppress the poor, who crush the needy, who say to their husbands, ‘Bring something to drink!’” (I’m sure Amos had choice words for the men, too) (4.1). Amos announces that hedonistic hoarders will be judged: “prepare to meet your God, O Israel!” (4.12)

Nor is divine anger against those who withhold food, drink, and more confined to the Old Testament. The apostle James warns the wealthy, “You have lived on the earth in luxury and in pleasure; you have fattened your hearts for a day of slaughter” (5.5). James is echoing his brother Jesus himself, who said, “Woe to you are who full now, for you will be hungry. Woe to you who are laughing now, for you will mourn and weep” (Luke 6.25). No divine retribution is visited upon Uri in Battlestar, but the corpulent and corrupt nobleman (using that term loosely) is as serious a threat to the Colonial family as are the well-off who remain callous to those in need in our world. Scripture testifies God will not forever allow that threat to continue, but will bring down “the powerful from their thrones, and [lift] up the lowly… [and fill] the hungry with good things” (Luke 1.52-53). 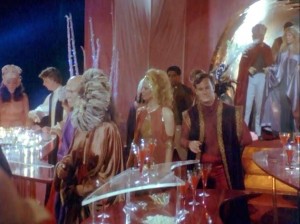 “Saga of a Star World” highlights another threat to community: collective amnesia. I’m not talking about a literal mass blackout (you never know—such things happen in sci-fi), but the plot does involve widespread forgetfulness. While scouting the planet Carillon, Starbuck and Boomer find an opulent gambling resort crammed full of cheery, can’t-lose customers so enraptured by their winnings they’re completely unaware the Colonies have been destroyed. Before long, the people of the fleet start emigrating to the surface. Commander Adama has misgivings: “Everyone seems to have forgotten our flight from the Cylons,” he laments in his personal log. “The beauty and wiles of Carillon hold our people spellbound.”

Glen Larson is a member of the Church of Jesus Christ of Latter-day Saints, and he drew on the symbols and stories of his Mormon faith when creating Battlestar. I’m not well-versed in Mormon teachings, so I refer you to those who are for more detailed discussions of them (for example, episode 135 of the Mormon Expression podcast). I do note, however, that the Colonials’ quest mirrors Mormon history. Like the Colonials, early Mormons fled from persecution, seeking security and liberty. I wonder how many Mormon children and adults, making their way to the Great Salt Lake Valley, had conversations similar to this one Boxey and Apollo have:

Apollo: We can’t afford to stay in any one place for too long.

Boxey: Why? Why do these people want to hurt us? What did we do to them?

Apollo: It’s not what we did to them. It’s what they fear we could do.

Historian of American religions Dr. Matthew Bowman explains in his book The Mormon People (Random House, 2012) that, in its formative years,

Mormon religious life was based on the construction of and participation in communities that often drew them away from the mores and values of American democratic culture. It is little wonder that their neighbors grew uneasy… [T]hey still, to a considerable extent, perceive a strong sense of difference from the world around them… In response to the persecution they faced in the United States, the Mormons made of themselves a people (pp. xvi, xviii, xix).

This same sense of communal identity is key in Battlestar. The fleet’s shared experience of persecution has forged them into a righteous remnant, desiring only freedom and peace. But, as Adama’s log entry suggests, if the fleet is to survive, it must remember where it has come from as well as the new future to which they are headed.

Christians affirm God has, through Jesus, joined us to his “treasured possession out of all the peoples” (Ex. 19.5), setting us apart in order to be “a chosen race, a royal priesthood, a holy nation, God’s own people” (1 Pet. 2.9). We are to be a community that lives differently from all others, that is marked by its values and practices as belonging solely to God, but we are often tempted astray by beauties and wiles as empty as Carillon’s. Our identity as Christ’s body is not in jeopardy—that is God’s doing—but we must remain vigilant regarding awareness of and conformity to that identity if we want it to take communal shape in this life.

As the letter to the Hebrews puts it, we “need endurance, so that when [we] have done the will of God, [we] may receive what was promised” (10.36). I once heard the brilliant preacher Fred Craddock characterize Hebrews as “a sermon preached in the parking lot.” The author’s congregation was on the verge of throwing in the towel. The effort it took to stay true to its core identity was too great; the reward seemed too small. But, said Craddock, the letter’s author, a real pastor who loved his people so and loved God so, pursued his flock out to the parking lot, preaching all the while, “Let us hold fast to the confession of our hope without wavering, for he who has promised is faithful” (10.23).

I catch a glimpse of that ancient preacher in Commander Adama as he exhorts survivors on Caprica’s still-smoldering surface to “set sail” for a better future.” Aboard Galactica, he tells them of his authentic hope, born from his faith, and encourages them to hold fast to it along with him: that they can and will find the “thirteenth tribe” on a “shining planet known as… Earth!” Hope, says Battlestar, can hold communities together and carry them forward.

Not for nothing did Ron Moore reimagine Battlestar when he wanted to process 9/11 in a science fiction mode. Not for nothing is Battlestar a candidate for yet another reboot, this time on the big screen. (That project may be on indefinite hold, but Battlestar has proven itself nothing if not resilient.) This “quirky post-Star Wars space opera” (io9) was that, but it was more. It was a worthy attempt to reflect on the perils and promise of community in an exciting and entertaining way.

God knows, literally, that America and the church still need lessons in living as a community. Maybe original Battlestar, robot dogs and repeated effects shots notwithstanding, still has a part to play in teaching such lessons to us.

You can read Part One of Mike’s 35th-anniversary Battlestar reflections here.