“The last thing we need,” Captain Irving tells Abbie and Ichabod as they begin this week’s investigation, “is another episode of The Twilight Zone.” Fortunately, the Sleepy Hollow creative team disagreed. Like a lot of Twilight Zone episodes, “For the Triumph of Evil…” combines spooky supernaturalism, strong characterization, and clear-eyed morality into an exciting and entertaining whole. (In the dream sequence at the end, Ichabod even walks through a door not unlike the one from Twilight Zone’s opening credits.) This new series’ third episode is its strongest one yet. 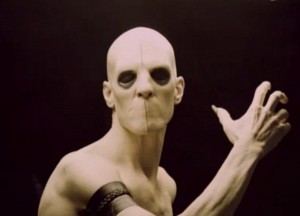 I don’t know what Mohawks may think about Sleepy Hollow rummaging through their religious beliefs (ostensibly) the same way it rummages through Christian ones in the service of the series’ mythology. The only references I found to Ro’kenhrontyes in an (admittedly quick) Internet search were to this episode. I assume this “faceless nightmare monster” is one more made-up piece of Native American lore from Hollywood’s endless supply—a visually stunning, convincingly creepy piece, but made-up just the same.

Likewise, Ichabod’s assertion that “many of our Mohawk friends were colonist spies… invaluable to the cause” doesn’t withstand a fast fact-check. I guess some individual Mohawks could have sympathized with Washington’s army (especially because Ichabod’s “37th regiment” seems fictional; the only Revolutionary-era military division I located by that name is the British Army’s 37th Regiment of Foot). But according to Grolier’s New Book of Knowledge, “there were far more American Indians who sided with Britain. Joseph Brant, the leader of the Mohawks, remained loyal to Britain… [and] was even made a captain in the British Army.”

I like the idea that, in 1781, Ichabod was living on the right side of history—advocating abolitionist legislation, sharing “peace pipes” around “powwow” campfires—but it’s ironic that an episode that (however briefly) acknowledges injustices perpetrated against indigenous tribes goes on to perpetrate some imaginative injustices of its own, revising colonists’ Revolutionary-era relations with Native Americans to make the series’ main white, male character look good, and inventing out of whole cloth a “dream demon” who, even though it is punishing sinful behavior (more on this later), is “some evil minion” to be stopped.

It all smacks of the very pablum Seamus Duncan (played by Michael Teh, late of Sharknado) both despises and shrewdly trades on as the owner of “Geronimotors” (I do think that name’s a brilliant touch). When Ichabod mentions Ro’kenhrontyes, Duncan asks, “You want me to go all kemosabe and cast a spell and do a rain dance?” He seems rightly offended that Ichabod and Abbie expect him to know all about the demon simply because Duncan’s a Mohawk. Of course, it turns out he does know all about it, so score one more for Hollywood.

As Sleepy Hollow mythology, I think Ro’kenhrontyes is brilliant. I also suspect it’s easier for me, as a non-Native American, to look past its faux Mohawk trappings in order to enjoy it.

I liked so much about this episode: 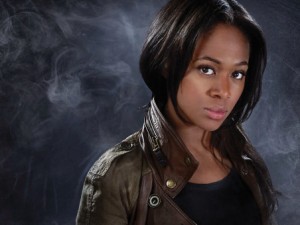 But I especially enjoyed the remarkably rich treatment of fear, guilt, and sin this episode provided. I wasn’t expecting to.  When I heard sandy-eyed Ichabod tell Abbie, in her dream in the episode’s teaser, “The truth will set you free,” I smirked. “Typical,” I thought, “another Bible verse ripped out of context!” The “truth” this phrase invokes is not some concrete, empirically verifiable fact or an abstract, Platonic ideal, but Jesus Christ, who is the truth, the way, and the life (John 14.6). He tells those following him, “If you continue in my word, you are truly my disciples; and you will know the truth, and the truth will make you free” (John 8.31-32). But as I thought longer, I realized Dream Ichabod’s quotation isn’t too far out of context; for when Jesus’ audience asks him what he means, he explains, “Very truly, I tell you, everyone who commits sin is a slave to sin… [I]f the Son sets you free, you will be free indeed” (8.34, 36).

As Sheriff Corbin the Friendly Ghost told Abbie last week, and as Ichabod realizes this week, Abbie has for too long been living as a prisoner to fear. Ichabod’s awkward, temporally challenged question of her in the pilot—“I presume you have been emancipated?”—takes on new, spiritual meaning if we see Abbie as still enslaved to the same fear that led her to deny the truth about the Demon in the Woods over a decade ago. Ichabod tells her that fear leads to inaction and pain. To put his syllogism in theological terms, fear leads to sin.

Does this depiction of Abbie diminish her? I don’t think so; I think it makes this incredibly strong character all the more realistic and relatable. I find Abbie’s reasons for staying silent completely understandable. I don’t think I would’ve been any braver than she was, had I been in her place. But sin, even when committed for understandable reasons, remains sin. Sleepy Hollow’s moral vision is clear here: Abbie was wrong to let Jenny down in her time of need, and Abbie needs to tell that truth if she is to find freedom. She needs Jenny’s forgiveness, she needs to forgive herself—and, though the show doesn’t say it, we can: she needs God’s forgiveness, too.

The good news is, God forgives sin and frees from fear. God doesn’t sic Sandman demons after us in our dreams to wrack us with guilt and punish us with pain. “If we say we have no sin,” wrote John, “we deceive ourselves, and the truth is not in us. If we confess our sins, he who is faithful and just will forgive our sins and cleanse us from all unrighteousness” (1 John 1.8-9).

Abbie’s declaration to Ro’kenhrontyes  is an almost ideal confession of sin: “I lied to protect myself. I was a coward and I betrayed my sister. I turned my back on her when she needed me, and I will not do it again. It was my fault… I’m not afraid anymore.” Abbie not only acknowledges the truth of her sin but also repents and turns from it when she goes to visit and, presumably, try to reconcile with Jenny. (It’s not Abbie’s fault Jenny has escaped!) I say “almost ideal” because, for Christians, confessions of sin are never defiant declarations of a fearlessness we’ve mustered up on our own, but humble admissions of our guilt before God: “God, be merciful to me, a sinner!” (Luke 18.13). Yet we, too, end by saying, with Abbie, that we are not afraid. We fear no demon (literal or otherwise) that assails us, nor do we fear judgment—God’s, other people’s, or our own, often crippling self-judgment. “If God is for us, who is against us?” (Rom. 8.31).

8 comments on “Reflections from Sleepy Hollow, 1.3: “For the Triumph of Evil…””