Usually in the Sci Fi Christian Classroom, host Ben DeBono and contributor Adam Pracht sit toward the back, smugly correcting grammar, whispering to each other about the full theological implications of Barliman Butterbur, and making *pfft* noises whenever someone mentions “Twilight.”

This week, however, Ben has played hookey or “gone on vacation” with the “wife” and “kids” to “Disney World.”

So Adam is stuck trying to hide his phone under his desk and text back and forth with Ben, as Ben waits in line and tries to determine how much valium it will take to ease the pain of “It’s a Small World.” 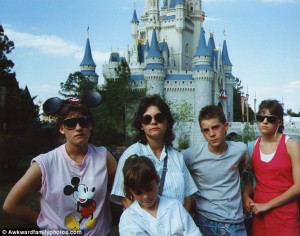 Ben upon arrival at Disney World…

Ben: Disneyworld is a relentless assault on sanity, patience, good taste and your bank account. In between dodging people who lack even a touch of spatial awareness and avoiding being run over by the hoard of rascal scooters, you are bombarded with messages of cloying ultra-individualism that would be offensive if they weren’t so vapid. The only thing keeping me going is the light at the end of the tunnel – we leave tomorrow! To quote Admiral Ackber – Disney is a trap. If you’ve never been, consider yourself blessed.

A: Wow, that sounds great! Really the Happiest Place on Earth! Wish I could go!

A: Well, I know you’re not going to have much time to watch the videos, so this will probably be a briefer one. First thing I want to address is their mention of how Lord of the Rings is sort of a “boy’s club.” To a certain extent, yeah, I get this. It’s lots of kings, battles and general chest-thumping. But I always want to say “What about Éowyn?” To me, she’s sort the antithesis of all this criticism. Especially when you consider the time in which it was written, you don’t get female characters much stronger. I understand why filmmakers do it, but I always think that shuffling around roles and characteristics to satisfy a feeling of political correctness is usually a mistake, especially for older stories. These were written within a context, and if you start to monkey around with that context, you start to change the story.

B: I’m not sure that Éowyn necessarily gets us out of the charge of it being a boy’s club. After all, Tolkien does make the point that she was deceived by Wormtongue in her desire to fight. Of course, the counterargument is that she is the one who – indeed the only one able to – defeats the Witch King. Still, her status as feminine heroine is suspect at best.

My response to the “boys club” charge would be – who cares? Why can’t we have novels where the heroes are predominately male or female? I’m not sure when it became a rule that the casts of our stories need to have a certain gender makeup – either for the sake of political correctness or to better appeal to as many segments of the marketplace as possible. Indeed, Tolkien defies that sort of thinking. LOTR features themes far more profound to the development of humanity than the often shallow goals of political correctness and its appeal is universal, despite having a predominately male cast.

To me, I wouldn’t even say it’s a product of its time. I think its simply the story Tolkien had to tell, in his time or any other. I wish modern storytellers would do the same.

A: I imagine that a big part of my feelings on this have to do with my wife and I borrowing heavily from Rohan in coming up with the middle names of our children. When people overlook Éowyn, I sort of feel they are dismissing my child.

But, point taken, and I agree it would be nice if we could accept stories as stories and not always feel this pressing need to make all the critics happy. I didn’t hear a clamor for “stronger male characters” in “The Hunger Games,” for example. (Incidentally, I went through those books in audio versions, which led to the amusement of some of my nerdy friends when I began to write Facebook posts about “Catness.”)

Perhaps there’s a feeling that in modern times we need to “make up” for those past injustices. Come to think of it, yeah, we probably do need to. But don’t do it at the expense of past story. Create new story that bends the old tropes.

While on the subject of story, one aspect that seemed interesting was the idea of “story vs discourse.” Story, they explain, is the “actual” sequence of events – the “what” of an artistic work. The discourse, however, is the “how.” Tone, length, word choice, event order, event repitition, etc. What seems interesting to me is that is seems to suggest is that “story” is something that exists outside of the artistic work itself and may not be directly accessed, but only glimpsed via the lens of how the story is told. This, at turns, reminded me of the muses, Plato’s theory of “true forms,” and the concept of absolute truth. What do you think, is story a separate consideration from discourse? Or if you change how the story is told, do you change the essential nature of the story itself? One set of works to consider in analyzing this might be “Ender’s Game” and “Ender’s Shadow.” These are essentially two different discourses on an identical story (with the perspective changed from Ender to Bean).

B: That’s a fascinating question. I’m glad you brought up the concept of Platonic forms – I was thinking the same thing. That seems to assume a very Platonic approach to stories – in which story and storytelling are distinct. The former is only accessible through the latter.

That is a fascinating and exciting way of thinking about stories, but I’m not sure it holds up. It seems that to make that argument you have to assume the story world as some sort of independent entity from the storytelling. Indeed, even independent of the storyteller. That works if we’re talking about something like historical fiction. If I write a novel about the Civil War then the story exists apart from my storytelling. The more I try to make my novel historically accurate, the more that principle applies.

But I’m not sure it works in regards to an entirely fictional story like LOTR. Unless it’s done intentionally within the narrative – i.e. the unreliable narrative or the narrative being a particular, though not entirely accurate, expression of the author’s larger world (arguably the case with Tolkien) – then the story exists exclusively in the narrative. There’s nothing behind the narrative that is even hypothetically inaccessible.

Where I think this concept can hold up is if we think about the thematic expressions of the story. Those could be seen as the particular expressions of Truth (capital T!) that exists beyond the narrative. The monomyth – which we’ve talked extensively about in other installments – is a great example of this. Individual narratives tap into the larger story world of the monomyth.

A: This links to an idea I have about the whole multiverse theory, that I’m just going to toss out but not comment on further:

If the multiverse is true, then I think there’s no such think as fiction.

I’ll just let the profundity of that sink in… Oooookay… Good.

One last thing I want to talk about is that moment when the in-person students are talking about an in-game event and one of them describing their heart pounding. We discussed last time some of our questioning of whether the professor even likes LOTRO, and I’m wondering whether this offhand comment might be the key. That the advantage video games have over books and movies is their ability to more quickly and efficiently induce a visceral reaction. That is, you feel more “a part” of what is happening than you do with the more passive (used loosely) experience of reading or watching films.

B: I think you’re onto something here. Video games are a more visceral experience. I’m often critical of entertainment that is predominately visceral in nature – how many times on the podcast have I railed against dumb action movies? – but that does change when it becomes a participatory experience. Though I would still argue that video games are better used for the sake of challenge, the visceral experience becomes far more powerful, effective and – dare I say – valid when it is engaged in actively in the form of a game than passively in your latest Michael Bay “blockbuster.”

“ADAM!” the professor at the front of the room barks, causing him to jump and slam his knee into the small desk as his phone drops with a clatter. The professor smirks.

“I knew you were texting, want to know why?” the professor says.

“Because nobody… Nobody… looks down at their crotch and just smiles…”

Ben on his last day at Disney World… 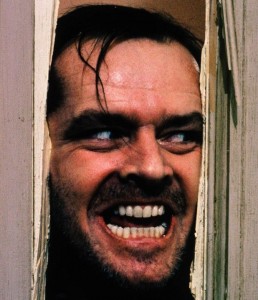