I’m judging from an admittedly small representative sample here (Matt and Ben), but I do get the sense that I’m one of the few diehard fans of “The Simpsons” among the SFC contributors. I highly suspect this has much to do with me becoming a fan right about the same time the full DVD sets started coming out, beginning with season 1. So, my early exposure to “The Simpsons” came prior to its nuclear meltdown into a slagheap of bad writing and lukewarm plots.

Hm, maybe I’m not so “diehard” after all.

Nonetheless, I’ve often thought that those who don’t watch The Simpsons but love sci-fi and fantasy are missing out when it comes to the Treehouse of Horror Halloween special episodes. Most of them are based on a work of sci-fi, fantasy or horror – or at least some sub-genre of these broad categories. Many of these episodes end up being great speculative fiction in their own right.

Here, then, are my Top Five Treehouse of Horror segments based on sci-fi, fantasy or horror that you should check out. A few points on how I chose: I only picked episodes that I have seen, so many of the later Treehouse episodes have gone completely un-considered. I gather that’s not much of an issue, though. Also, I went by how much I actually like the episode, not necessarily the work it is derived from.

“The Simpsons” is admittedly at its least “Christian” in the Treehouse episodes, but in them, they are doing sci-fi and horror really well. Here goes! 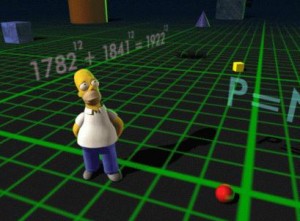 Plot: Homer accidentally ends up slipping into the mysterious “third dimension” while trying to escape from his sisters-in-law, giving us a cool computer-animated version of Homer and – eventually – Bart.

Based on: Tron and a handful of other computer-generated touchstones and in-jokes.

Why it’s great: It’s been nearly 20 years since the creation of this episode, and the look has really held up for coming from the business of computer animation – where success is a constantly moving target. In short, a creative idea, brilliant execution and an oddball conclusion that actually works.

Did you notice? Probably more in-jokes and Easter Eggs here than you’d care to know about; however, my favorites are that the museum in the background is based on Myst, the teapot is the first computer-generated image ever (and I’m old enough to remember being amazed by it), and the hexadecimal string “46 72 69 6E 20 72 75 6C 65 73 21” translates to “Frink rules!” in ASCII. 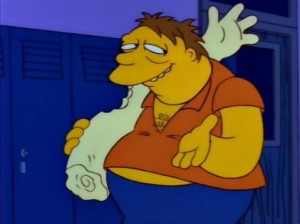 Plot: Trying to resurrect their cat, Bart and Lisa accidentally raise the dead.

Based on: The sub-genre of zombie films, especially Night of the Living Dead and Evil Dead.

Why it’s great: A zombie tale made before they became such an overdone “thing.” Lots of fun moments and a fast pace.

Best moment: Homer sacrifices himself for his family as the zombies call out for “brains,” only to be shoved aside in frustration for renewed and more desperate calls for “brains!”

Plot: The Simpson family is hired to care for Mr. Burns’ home during the winter. They take all the beer and cut the cable so that they’ll work. No beer and no cable make Homer somethingsomething… [Go crazy?] Don’t mind if I do!

Based on: Steven King’s The Shining (Also, worth mentioning that the frame for the three stories starts with a great Outer Limits parody).

Why it’s great: This is a case where I enjoy the adaptation better than the original. Every beat of the story has a fall-out-of-your-chair line. It manages to be funny but horribly creepy at the same time. Also, it managed to be scarier than the original at times (I thought The Simpsons reveal at the typewriter beat out the original, hands down). I appreciated that it made fun of many of the glaring plot holes I’d always seen in the original (Lisa: “Mom, is Dad going to kill us?” Marge: “We’re just going to have to wait and see…”).

Best moment: The aforementioned reveal of the writing on the wall.

Did you notice? Maggie spells out “Redrum” with her blocks.

Favorite quote: Almost too many to pick just one, but:
Groundskeeper Willie: “Boy, you read my thoughts. You’ve got the shinning.”
Bart: “You mean the shining.”
Willie: “Shh! You want to get sued?”

Plot: Homer accidentally breaks the toaster, then ends up making a time machine while trying to fix it and goes back to the time of the dinosaurs, where he changes the past and, thus, the future in multiple ways.

Based on: The time-travel genre in general, especially ones where time is changed, as well as smaller borrowings from elsewhere, such as 1984 by George Orwell.

Why it’s great: Hilarious from the moment it begins with Homer talking about the beauty of his life and then sticking his hand in a toaster. Then doing it again. It never lets up: great lines, original plot and fun outcome.

Best moments: Homer loses it completely and starts smashing things in the past at random until the time machine snatches him back. Also, Homer coming to his idea reality, only to flee when it has no doughnuts (or DOES it?)

Did you notice? For some reason, Homer keeps wieners on his person.

Favorite quote:
Homer: “OK, don’t panic. Remember the advice your father gave you on your wedding day.”
Abe: “If you ever travel back in time, don’t step on anything because even the tiniest change can alter the future in ways you can’t imagine.” 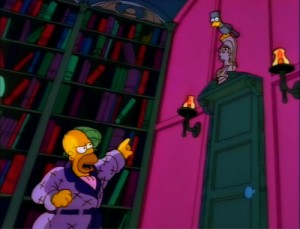 Plot: James Earl Jones narrates “The Raven” while Homer is the main character and Bart is the Raven.

Based on: “The Raven” by Edgar Allan Poe

Why it’s great: It’s James Earl Jones. Narrating “The Raven.” With Homer and Bart. What’s not to love? Seriously, I’m a sucker for a classic, and this is done absolutely right. What I particularly love is that Homer and Bart are still themselves, but they don’t treat “The Raven” in a goofy way (even though there are jokes, like Homer reading a book called Forgotten Lore Vol II). This classic is still treated with respect and drama.

Best moment: Toward the end during a slow pullout, Homer is in the wreck he has made of the room, huddled on the floor, while Jones narrates the final lines beautifully.

Did you notice? It takes multiple frames to contain the hair in the portrait of Lenore/Marge.

So what’s your favorite Treehouse of Horror? What have I left out? Leave a comment. I’d love to discuss.

2 comments on “The SFC 2013 Trick-or-Treat with Adam: Top Five Simpsons Treehouse of Horror Episodes Based on Sci-Fi or Fantasy”