Surprise! You get a bonus!

As Catholics, Ben and I treat Nov. 1 with some special significance. It’s one of the “Holy Days of Obligation,” and ranks up there with Christmas and Easter for days when you need to make your plans for getting to mass. It’s also special as we honor those who have gone before to provide examples of the Christian lifestyle.

Speaking of obligation, I must have felt obliged to write far more than was reasonable for the short “Trick or Treat” articles (see what I did there?)

So, here are the top #6-10 Simpsons Treehouse of Horror episodes that I left off from yesterday’s post. No, they have nothing to do with All Saints Day, but I hope you enjoy them all the same. 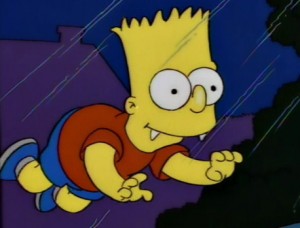 Plot: The Simpsons are invited to the home of Mr. Burns, who in this segment is not only a bloodsucking boss, but also a bloodsucking classical vampire. Bart gets bitten and turned into a vampire himself, and Lisa goes on a quest to kill the “head vampire” to rescue Bart.

Based on: “Dracula” by Bram Stoker (Duh) and Francis Ford Coppola’s film adaptation. Also borrowings from “Nosferatu” and “Salem’s Lot.”

Why it’s great: I found it amusing that the introduction article to this “Tricks and Treats” series made reference to the Peanuts Halloween special, because the ending of this piece – which makes a clear allusion to Charlie Brown endings – nearly kept this episode off the list. It suffers from the same problem as many of the other Simpsons Halloween episodes – they write themselves into a corner, only to get out of it with a nonsense non-ending.

Still, it’s an excellent adaptation at all moments before then: Burns forgetting to let go of the intercom button as he spouts his nefarious plans; Homer saying  “Pennsylvania” in the same ominous voice you’d say “Transylvania;” Marge asking whether everyone had washed their necks like Mr. Burns asked.

Best moment: The way Homer says, “Super Fun Happy Slide!” (It makes more sense in context). That alone is the real reason this is on the list.

Did you notice? When Bart is about to bite Lisa but is caught by Homer, his vampire fangs subtly retract a few inches – like a kid who just broke a window trying to hide the baseball bat behind his back. 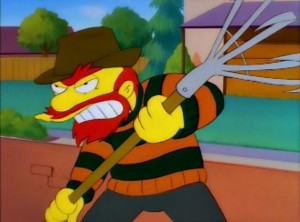 Plot: Willie dies in a (preventable) accident and (rightly) blames the parents of Springfield Elementary. He starts entering the dreams of the children and killing them in their sleep.

Based on: Nightmare on Elm Street with some nods to Warner Brothers cartoons, The Pagemaster, Maximum Overdrive, Terminator II and It.

Why it’s great: While it’s basically a one-to-one adaptation of the original Nightmare and it has the same problem of the “anti-ending,” this one still makes the list not so much for the writing but the art. From the goofy Looney Toons style at the beginning to the dark and menacing environment of the final confrontation, this episode looks much better than it sounds.

Best moment: Martin dies in his sleep because of Willie. Skinner advises lunch lady Doris to take him out quietly, but his foot is on the sheet and he reveals Martin’s twisted rictus of horror. He says to just get him out there, then at the sounds of tiny screams exclaims, “Not into the kindergarten!”

Did you notice? Krusty the Clown’s uniform says “Krustofsky” on the back.

Homer: [shivering and looking at the calendar] “Oh, lousy Smarch weather.” [Spies the thermostat with a note from Willie that reads, ‘Do not touch Willie.’] “Good advice!” 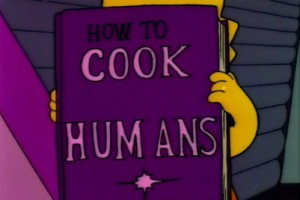 Plot: Our first introduction of Kang and Kodos, who make an appearance in all the Treehouse of Horror episodes in the years that follow. Expect a lot of creativity in this wonderful adaptation. Aliens arrive and spoil the Simpsons with fawning attention. Lisa thinks they’re being groomed to be food and confronts them.

Based on: The Twilight Zone episode, “To Serve Man” with some references to Star Trek–pulling the names of the aliens from original series episodes.

Why it’s great: This is based on one of the most memorable Twilight Zone episodes with a masterful twist ending (old spoiler alert) turned into a funny and even cleverer twist-after-twist ending.

Favorite quote:
Kang (or Kodos): “We offered you paradise. You would have experienced emotions a hundred times greater than what you call love. And a thousand times greater than what you call fun. You would have been treated like gods and lived forever in beauty. But, now, because of your distrustful nature, that can never be.”
Marge: “For a superior race, they really rub it in.” 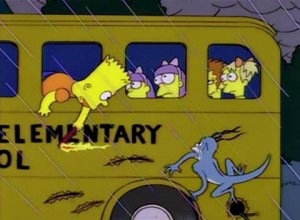 Plot: Bart sees a gremlin crawling around the side of the school bus, tearing it up and threatening to crash it. He spends the episode desperately trying (unsuccessfully) to convince others that their lives are in danger.

Why it’s great: The episode this was based on is one of the most enduring of “The Twilight Zone” and proves a really fun adaptation. Oddly, Bart primarily acts as the straight man in this episode, giving Millhouse, Skinner, Otto and others the opportunity for some great one-liners.

Best moment: Bart implores Otto the bus driver to stop the bus because there’s a Gremlin on the side of it. Otto looks out to see Moleman driving a Gremlin car. Otto “takes care of it” by ramming the Gremlin until it runs off the road. It rolls to a gentle stop just before a tree, but explodes anyway.

Did you notice? Bart is taken away to the “New Bedlam Mental Hospital.”

Favorite quote:
Lisa: “Bart, what’s wrong?”
Bart: “I just had a vision of my own horrible fiery death.”
Lisa: “And…?” 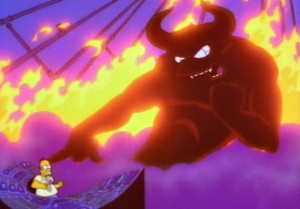 Plot: Homer Simpson makes a deal with the Devil – who ends up actually being super-churchy Ned Flanders – to sell his soul for a doughnut. He stops short before the last bite and saves himself, but then damns himself again by eating the “Mmm, forbidden doughnut…” in the middle of the night. A trial ultimately rescues him (well, sort of) with some legal mumbo jumbo, but in a way that’s kind of sweet (in all senses of the word).

Based on: “The Devil and Daniel Webster” by Steven Vincent Benet. Also snippets from the “Night on Bald Mountain” segment of “Fantasia,” the “Pigs is Pigs” Warner Brothers cartoon featuring Porky Pig’s nightmare, and the ironic punishments of Dante’s “Inferno.”

Why it’s great: A classic work of literature with a really fun Simpsons take. I really enjoy that Flanders turns out to be the Devil (“It’s always the one you least expect.”) and the resolution of this one. It’s a beautiful image of how we can help save each other from our own terrible choices and greed.

Best moment: Bart messing with Satan (“I’d sell my soul for a Formula One racing car…changed my mind. Sorry.”)
OK, this one gets two “bests:” the warning signs around the last bite of doughnut, including “Daddy’s Soul Doughnut.”

Did you notice? Lionel Hutz is combing his hair with a fork.

Favorite quote:
[After Homer’s head is turned into a doughnut]
Marge: “Homer, stop picking at it!”
Homer: “Oh, but I’m so sweet and tasty…”

Have I still not picked your favorite? Leave a comment. I love discussion.

2 comments on “The SFC 2013 BONUS All Saints Day Treat with Adam: #6-10 Simpsons Treehouse of Horror Episodes Based on Sci-Fi or Fantasy”