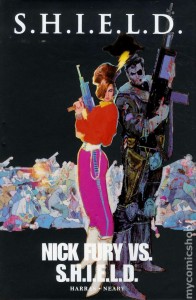 Nick Fury in a horror story? What is this you say? Well, I have to admit that 1988’s Nick Fury vs. S.H.I.E.L.D. written by Bob Harras and penciled by Paul Neary really does include elements of a creepy Halloween story wrapped up in the wrapper of a spy thriller.

Nick Fury and his team attempt to salvage a downed helicarrier in New Mexico. The power core goes critical and only the actions of Agent Clay Quartermain save the day, in a heroic but fatal act. But from the jaws of victory is defeat as A.I.M. forces steal the power core out from under the S.H.I.E.L.D. team. Fury’s investigations uncover the core in the possession of Roxxon, who is working with A.I.M. and controlling a mysterious group codenamed Delta which is staffed by S.H.I.E.L.D. agents. The Council becomes displeased with Fury’s sleuthing and orders his death! Fury goes on the run and faces off against his closest friends and colleagues as they try to kill him while he tries to find the secrets behind Delta. And Fury discovers a horrible truth: that not everyone in S.H.I.E.L.D. is who they seem to be.

Wait, where is the Halloween element? You might be asking. As mentioned, Agent Quartermain heroically dies in action, or does he? Quartermain re-emerges, and much like Agent Coulson, does not remember any of his death– Tahiti is a magical place! As the reader struggles with the question of how Quartermain survived, one notices that S.H.I.E.L.D.’s new director, Jasper Sitwell, seems to be acting strangely. He is determined to capture Fury, stating that Fury taught him this single-minded focus. But, the reader begins to question why one so loyal to Fury’s teachings would be so adamant in killing Fury with little explanation. Fury’s confidant Agent Jimmy Woo appears to be aging at an unreal place, and also seems determined to kill his friend. After Fury fights and kills a Delta agent, one begins to question who, amongst S.H.I.E.L.D. has not been compromised by Delta. Have S.H.I.E.L.D.’s best and brightest been replaced with aliens, robots, zombies, Life Model Decoys, magical shape shifting demons? I need to know!

The good news is that in the end, it all gets wrapped up and we learn all of Delta’s secrets.

This story has no vampires, no werewolves and no demons, but for me, this is a true story of terror. What if everyone you knew had turned against you? What if you discovered that some of them had been replaced by someone or something else? For Fury, he truly does not know who he can trust. And even those who love him struggle with the question, could I kill Nick? It is a whole different kind of terror as Agent Countess Valentine Allegra dela Fontaine debates if she could kill the man she loves based solely on orders. There is no one that Fury can run to that can provide him relief from the pursuit of those wishing to destroy him.

I really do believe that even if we are not called to marriage, we were not built by God to be alone. We were built to be part of a community. And I call myself lucky to be part of a family, including folks that I am not bonded to by blood or marriage. As it says in Ecclesiastes 4:12, “Though one may be overpowered, two can defend themselves. A cord of three strands is not quickly broken (ESV).” As I think about what I fear, losing my family and friends is likely my greatest fear. Together we do life together, share in burdens and provide assurance of our positions as God’s children. Like Nick Fury, I need this community for me to function. Losing those within my circle is my true fear. And I can imagine that even in an act of fiction that Fury would be unsettled by not being able to reach out to someone like Dum Dum Dugan, an ally since World War II. I do not think that many of you would be shocked to find out that one of Fury’s first tasks in this story is to find a brother to help bear his burdens!

Nick Fury vs. S.H.I.E.L.D. at its core is a James Bond type thriller, but what lies underneath is what truly scares me. What if those who loved you, knew you, cared about you were no longer there for you, and potentially evil. As I see kids dressed as demons, ghosts, Norse gods, Spider-Men and Batmen collect candy, I realize what I truly fear. I fear not sharing in the community I was designed by God to part of. Agents, make sure that your backup knows during this Halloween season, that they know you value and need them.

You can read and hear Daniel’s thoughts on Marvel’s Agents of S.H.I.E.L.D. and the Marvel Cinematic Universe at www.welcometolevelseven.com.