No new Sleepy Hollow episode in the week of Halloween? That’s so wrong! Oh, well. We can still visit our favorite “haunt.” Washington Irving, America’s first true “man of letters,” immortalized it in his short story, “The Legend of Sleepy Hollow” (1819). Irving’s Sleepy Hollow is, like Halloween itself, a liminal experience, straddling the threshold between fact and fantasy: “There was a contagion in the very air that blew from that haunted region; it breathed forth an atmosphere of dreams and fancies…”

I first heard about the Headless Horseman from the back of a cereal box. A real, honest-to-goodness 45 rpm record was pressed into the cardboard. You cut it out, put it on your turntable, stuck a penny in the center so the thing wouldn’t go spinning off, and listened.

That ghost’s crazy laughter curled my kiddie blood and kindled my young imagination something fierce!

But there’s nothing supernatural about Irving’s original story. No, the narrator never directly tells us that Brom Bones, the “rantipole” (what a great word) who is Ichabod’s rival for Katrina’s hand, plays the part of the Horseman to scare the superstitious schoolmaster away. If we fail to miss that inescapable conclusion, however, we’re as deserving of derision as Ichabod is.

Irving’s Ichabod is not the “tall, dark, and British” stud on Fox’s hit series. He’s absurdly tall and scrawny, with “hands that dangled a mile out of his sleeves” and “feet that might have served for shovels.” He’s vain, gluttonous, and smug. He woos Katrina mostly because he wants to inherit the “almost unimaginable luxury and splendor” of her father’s estate.

The 1949 animated Disney production The Adventures of Ichabod and Mr. Toad captures Ichabod’s intolerable essence. From his ungainly appearance to his insufferable superiority complex, Disney’s Ichabod is as unpleasant as Irving’s. (Only the fact that Disney’s Ichabod croons in Bing Crosby’s smooth tones, rather than the nasal whine Irving describes, is incongruous.) When I sat down with my kids to watch this cartoon, for the first time in decades, I was surprised to find myself rooting against him! 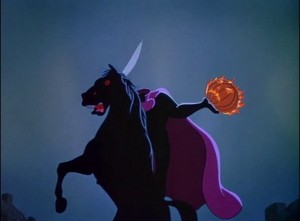 The cartoon ends with an exciting rendition of the famous horse race to the footbridge, and the image of the Horseman hurling a flaming jack-o’-lantern at Ichabod is indelible. But the cartoon, generally faithful to Irving’s story (even preserving a fair amount of his text in Crosby’s narration) insists on suggesting that maybe the ghost of a headless Hessian spirited Ichabod away.

Not a chance! In Irving’s story, Ichabod deserves to be bested by Brom because Ichabod represents what the narrator dislikes about the relentlessly forward march of nineteenth-century America.

Between Yesterday and Tomorrow

In Irving’s story, the narrator praises Sleepy Hollow for being a place where “population, manners, and customs remain fixed,” contrasting “the great torrent of migration and improvement, which is making such incessant changes in other parts of this restless country.” The narrator loves Sleepy Hollow because, for all its’ residents fascination with things that go bump in the night, it’s an oasis of stability and security as the rest of America rushes headlong toward the western horizon of modernity.

That’s certainly where Ichabod’s set his sights. He wants to marry Katrina and set out “with a whole family of children… for Kentucky, Tennessee, or the Lord knows where.” The itinerant teacher thinks he’s better than the people of Sleepy Hollow and can’t wait to leave them. In that sense, Brom Bones does Ichabod a favor by scaring him into a sooner departure date!

Almost two centuries after Irving wrote his story, America still struggles to balance respect for the past with anticipation of the future. Christians face this tension, too. We must both remember God’s great deeds for us in the past and not “remember the former things, or consider the things of old,” lest we fail to notice God’s “new things” springing forth (Isaiah 43.18-19, NRSV).

“The Legend of Sleepy Hollow” isn’t a ghost story, but presents a potentially harrowing prospect. Will we be so focused on the future that we, like Ichabod, scorn our heritage? On the other hand, will we remain so rooted in the past, as are the literary citizens of Sleepy Hollow, that we succumb to the “drowsy, dreamy influence” of nostalgia? The narrator admires the village for being a Twilight Zone-ish Lake Wobegone, but God doesn’t call Christ’s Church to live that way! Instead, surrounded by the great cloud of witnesses who’ve gone before us, we must wind our way, like the Tappan Zee river, between the shores of past and future, toward the city God has prepared.

2 comments on “The SFC 2013 Trick-or-Treat with Mike: Washington Irving’s “The Legend of Sleepy Hollow””