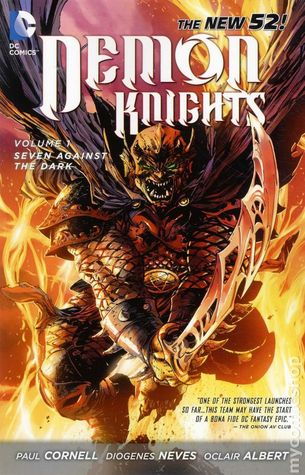 As you’ve seen in recent days on our website, we have been posting various Halloween-inspired articles to celebrate a semi-sci-fi holiday. I knew that I would want my article to be a review of a comic, and Demon Knights was the first one that came to mind. This is a title that I had heard a lot of good things about, and had been meaning to check out, so Halloween gave me the opportunity to finally dive into this book. As a quick disclaimer before I proceed with my full review, you should know that this turned out to be not a very Halloweenish book. It was way more of a “sword and sorcery,” Dungeons and Dragons sort of thing.

As part of DC Comics’ New 52 initiative from late 2011, Demon Knights served as a new type of superhero team book set in the Dark Ages. Look at it like the Justice League, if they existed during medieval times. The title of the first volume of this series is called “Seven Against the Dark,” because it introduces the seven team members that will comprise the Demon Knights. The two most well known of the Demon Knights are Etrigan and Madame Xanadu. Etrigan is interesting because he is kind of a Hulk-like character. His quick origin, as presented in the prologue of this book, reveals that Etrigan was an evil demon being held in chains by Merlin, the famous wizard from King Arthur’s court. Realizing that he would soon lose the ability to restrain the demon any longer, Merlin imprisoned the beast inside the body of an innocent human named Jason Blood. Jason now possesses the power to transform into the demon when he needs to fight for justice; however, when in control, the demon has a mind of his own. Sometimes he helps and sometimes he does whatever he wants. The catch with using his new transformation power is that every time Jason allows Etrigan to take over, his own body and consciousness are teleported to Hell. There, Jason has to wait, with all of Etrigan’s dead victims, until the demon allows Jason to take over again. At first I wondered why Etrigan would ever transform back to Jason, but it turns out that Etrigan becomes less and less powerful the longer he spends time outside of Hell (where he typically resides). 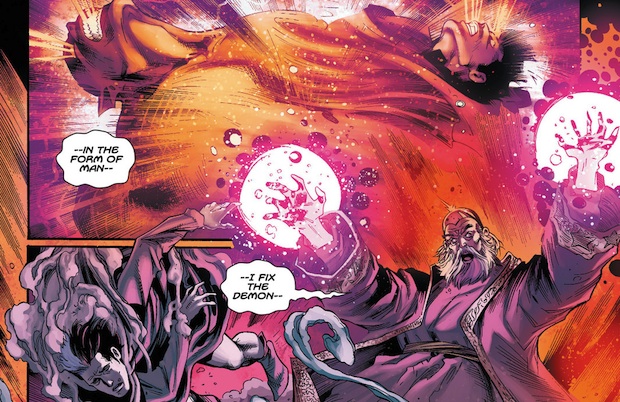 We don’t learn as much about Madame Xanadu, although it is mentioned that she received her magical training from Merlin, and that she is second in power only to her teacher. She and Jason both seem to be immortal because they both lived during Arthurian times, and are still young and powerful 6,000 years later (during the Dark Ages). More than that, I know that Madame Xanadu is also a member of the Justice League Dark, which is set in the present day DC universe. Xanadu’s true allegiances are hard to define because she proclaims love to both Jason and Etrigan, telling each that she is tricking the other entity to keep them in line. While she is shown to be very magically powerful, we also find out that magic often requires a sacrifice (more on that later).

Likely the next most notable member of the team is Vandal Savage. Savage is an interesting character in that his morality is very unique. He has good in him, but he also has brutality in him. He, too, is an immortal, and he has said in the past that he sometimes likes to fight with heroes and he sometimes likes to fight against them. In the present day DC universe he is typically seen as a villain, but in this story, he is an unlikely, albeit selfish, hero.

The next four team-members were all unknown to me prior to picking up this collection. First, we have Shining Knight who clearly looks like a woman, but claims to be a man. There is no explanation for why this is the case. “His” real name is Sir Ystin, and in one of the most interesting parts of the story, he receives a vision in which he communicates with Merlin. It turns out that Ystin, too, is from the time of King Arthur and that Merlin embedded an important quest deep inside his mind. So deep, in fact, that Ystin was unaware what he was questing for until having this vision. Ystin was granted a form of immortality when Merlin made him drink from Jesus’ Holy Grail. And the quest, as it turns out, is to track down the powerful Grail that Merlin has hid away.

Second, Al Jabr joins the team as a man of both science and faith. I know little about him other than that he believes in a higher power and he is very intelligent. He is almost an ancient Tony Stark, able to make mechanical connections that others don’t see in order to build things that will serve his good cause. He repeatedly corrects people that he isn’t using magic because magic is just a way of understanding that is ahead of its time. To paraphrase, he believes that magic is advanced technology or science that we don’t yet understand.

Next, Exoristos has a story that sounds similar to that of Wonder Woman. Exoristos is an Amazon from Paradise Island; however, she has been banished for some reason (which we don’t find out in this volume). Her power doesn’t seem to be at the same level as Wonder Woman, but she is still extremely strong.

Finally, a mysterious figure called The Horsewoman joins the team. Something weird is up with The Horsewoman because she can never leave her horse for some reason. We will probably eventually find out that she has is under some sort of curse, but the one time we see her off her horse, she is sleeping, and when she is startled awake her body automatically levitates back onto the horse. Oh, and she also communicates telepathically with horses to call them into battle. This is just like Aquaman with sea life, but again, she talks to horses instead.

Instead of describing the plot of the story beat by beat, one of the main themes of this book needs to be discussed. In a story filled with demons and magic and villainy and violence, the biggest motif to come out of it is the need to sacrifice for the greater good. As I was first thinking through the book, I thought that perhaps each of our seven “heroes” made a sacrifice at some point. After further reflection, I don’t think my theory is 100% true, but many of the characters do show a sacrificial nature.

The most apparent example of sacrifice is when Madame Xanadu creates a protective barrier around the village that is being attacked. She knows that every human will be destroyed if she doesn’t do something, but she uses so much of her magical power to create this wall that she drains the life out of herself. Right before our eyes, we see her age to an extremely old woman, fragile and close to death.

My favorite sacrifice in the book, though, comes from Shining Knight. Merlin warns Shining Knight that if he takes on the proposed mission, it will cost him everything that he holds dear. Merlin goes on to say that all is lost without Shining Knight’s aid, but leaves the final decision in his hands. Will he take on the burden or not? Shining Knight responds, “What is lost can be found. Love will rise again. I will make it so. Thank you for this burden.” This moment is filled with hope, and raises the Shining Knight character up many levels in my mind. What an amazing example of a sacrificial servant, thanking Merlin for the chance to lay down everything for the wellbeing of others!

I tend to be a harsh critic when it comes to comics, and am rarely head over heels in love with a book. More often, I find them to be enjoyable, but not great; a sort of middle-of-the-road. That’s what I see when I look back on Demon Knights. It was interesting in its character creation, and I like the fact that the setting is different than most superhero stories, but all in all it was just okay. My final rating is 2.5 stars out of a possible 5. I am not a huge fan of sword and sorcery, though, so if you typically enjoy that sort of thing, this book is for you. But with that being said, before I conclude this article, I must give a shout-out to their use of the word “dragon” in this book. As I’ve claimed in past episodes of The Sci-Fi Christian (see episodes 12 and 178), I believe that the dragons from ancient mythologies are really just dinosaurs. In “Seven Against the Dark,” the evil forces use “dragons” to attack our heroes, and guess what…they are actually dinosaurs! So, if you want to see an analogue for Wonder Woman go one-on-one with a triceratops, check out this book. 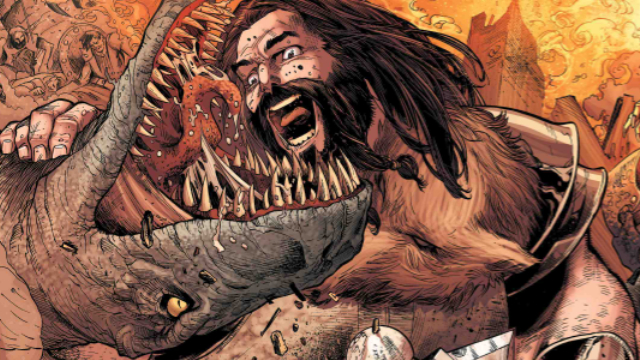 8 comments on “The SFC 2013 Trick-or-Treat with Matt: Monsters on Parade: A Review of Volume One of Demon Knights”