This classic “Doctor Who” serial is a little short on logic but long on eerie atmosphere and human drama. 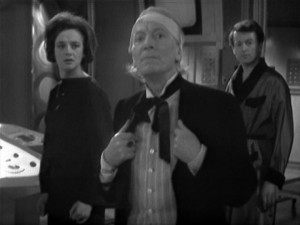 An enigmatic, powerful force violently interrupts the TARDIS’ flight, stranding it in temporal-spatial limbo and knocking its passengers unconscious. When they awaken, a bizarre series of events unfolds. Susan almost stabs Ian with a wicked-looking pair of scissors. Ian tries to strangle the Doctor and Barbara. The Doctor slips sleeping drugs into everyone’s tea. (I’m not joking.) Panic and paranoia build until the Doctor, convinced the schoolteachers have somehow sabotaged his ship, threatens to abandon them to a fate unknown.

If analyzed too closely, Doctor Who’s first “bottle show” doesn’t completely hang together. The second episode abandons the steady, suspenseful pace of the first as it lurches toward the story’s conclusion. Some lines of dialogue intended to provide clarity only muddy matters further (“We had time taken away from us, and now it’s being given back to us, because it’s running out!”). And the solution to the crisis is beyond anti-climactic (has the Doctor never encountered WD-40 in all of time and space?). From the nitpicker’s point of view, “The Edge of Destruction” appears in need of bandaging as badly as does the Doctor’s wounded head.

But don’t skip this story! I enjoy it tremendously. It’s short (just 50 minutes long—remember, the previous serial, “The Daleks,” ran seven weeks). It plays with creative, compelling ideas (if you thought, for example, that Neil Gaiman invented the notion that the TARDIS is conscious in 2011’s “The Doctor’s Wife,” “The Edge of Destruction” proves otherwise). And it almost feels like a lost episode of The Twilight Zone. Like such modern Who stories as “Blink” and “Midnight,” “The Edge of Destruction” boasts a moody atmosphere of mystery and tension so unsettling, Rod Serling could walk out from behind the fault locator. See for yourself in this creepy clip:

But like the best Zone stories, “The Edge of Destruction” isn’t weird for weirdness’ sake. Eleven weeks into the series, just as we think we’ve gotten to know these characters, they become strangers to us and to each other. The TARDIS becomes a crucible, testing these individuals’ relationships—and not all those relationships emerge unscathed.

When the Doctor accuses Barbara and Ian of sabotage and resolves to treat them as enemies, Barbara’s justified outrage is electrifying:

How dare you! Do you realize, you stupid old man, that you’d have died in the Cave of Skulls if Ian hadn’t made fire for you? And what about what we went through against the Daleks? Not just for us, but for you and Susan, too. And all because you tricked us into going down to the city! Accuse us? You ought to go down on your hands and knees and thank us! But gratitude’s the last thing you’ll ever have, or any sort of common sense, either. 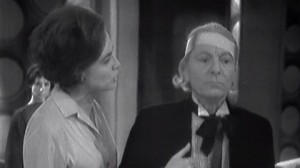 Beyond its nifty references to the two previous stories, Barbara’s speech elevates her to nearly prophetic status. Like Elijah challenging King Ahab, Nathan accusing King David, or John the Baptizer railing against King Herod, Barbara speaks truth to a power that sees itself as beyond judgment and above reproach. By the end of this story, the Doctor is not the same imperious, self-righteous man he has been, and Barbara deserves most of the credit. She reminds us we must sometimes say “no,” and loudly, when those with power wield it in unjust ways.

Jacqueline Hill imbues Barbara with even more depth at the story’s end. The Doctor sheepishly credits her for saving the day: “It was your instinct and intuition against my logic, and you succeeded… We all owe you our lives.” As the camera pushes in on Barbara’s face, we see her sadness and fear. The Doctor is right, and she knows it. All four travelers do owe their lives to her, and she does not welcome that burden. As many companions after her will find, traveling with the Doctor changes people, not always happily.

The story ends as Barbara accepts the Doctor’s almost-apology and puts on a brave smile to go and face a new adventure. We would, however, be ill-advised to underestimate her, as the Doctor admits he has. She is indeed, in his words, “very valuable,” both as a level-headed thinker and as someone who reminds them all, as they travel, of sober realities. Life can be an adventure, but adventures bring dangers, and we can’t ignore them—even if facing them proves burdensome.

Giggling at the Grandeur 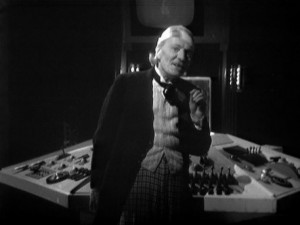 At its best, however, Doctor Who doesn’t focus on life’s burdens of life without also lifting up its blessings. “The Edge of Destruction” is no exception. This story contains the first of the Doctor’s awe-filled speeches extolling the marvels of the cosmos. What he says here doesn’t rival, for instance, the lyricism of what he’ll say (with Matt Smith’s face) in “Night Terrors” (“Through crimson stars and silent stars and tumbling nebulas like oceans set on fire…”), but his words still have a certain poetic flair. Realizing where and when the TARDIS is, the Doctor says:

We’re at the very beginning—the new start of a solar system. Outside, the atoms are rushing towards each other—fusing, coagulating, until minute little collections of matter are created. And so the process goes on, and on, until dust is formed. Dust then becomes—solid entity! A new birth, of a sun, and its planets!

William Hartnell delivers these words haltingly but deliberately, his voice full of excitement, his eyes sparkling with wonder. With his hands he mirrors the movements of the swirling primordial matter outside the ship, until, at the speech’s end, he clasps them over his mouth as he—giggles! He doesn’t chuckle or chortle. He doesn’t guffaw or double over. He’s so giddy with the thought of a star and its satellites being born, he giggles! It should seem a ridiculous moment, but it doesn’t. It demonstrates that, even in dire circumstances, the Doctor doesn’t lose a youthful wonder at the world.

The Doctor doesn’t share the psalm-singer’s humility when he “looks at [God’s] heavens, the work of [God’s] fingers, the moon and the stars that [God] has established” (Psalm 8.3), but he definitely shares that sense of amazement at the cosmos. It’s an attitude we Christians should share, too. We often focus so much on God’s relationship to humanity, on the fact that the God of the universe has nevertheless “crowned [us] with glory and honor” (Psalm 8.5), that we talk and act as though the Creator doesn’t maintain a relationship with the rest of Creation!

God still cares for and takes divine enjoyment in the natural order. Just see the pride with which God parades various constellations before an astonished Job’s eyes: “Can you bind the chain of the Pleiades, or loose the cords of Orion? Can you lead forth the Mazzaroth in their season, or can you guide the Bear with its children?” (Job 38.31-32). God can! God created and brings out the starry host, “calling them all by name” (Isaiah 40.26).

And maybe—just maybe, for a fleeting moment each time—God giggles as he does.