A female Captain Kirk challenges “old assumptions,” within and without of the Star Trek universe.

What if Captain Kirk were a woman?

I’m not talking about a situation like that in the Original Series’ abysmal last episode, “Turnabout Intruder,” with William Shatner prissily buffing his nails to portray a woman in Jim Kirk’s body. I’m talking about an alternate Enterprise with a completely gender-swapped crew.

That’s the premise of “Parallel Lives,” a two-part tale that kicks off in this month’s issue of IDW’s ongoing monthly Star Trek comic. Some creators would treat it like a cheap gimmick, but writer Mike Johnson, assisted by Yasmin Liang’s sharp and clean art, spins from it an immediately engaging, emotionally compelling story.

JTK and Her Crew 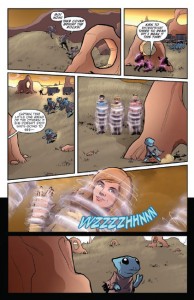 Captain Jane Tiberia Kirk shares more than a set of initials with the Captain Kirk we know. She radiates charm and charisma. (Personally, I was smitten the moment I watched her impishly flash the Vulcan salute at an awestruck alien while dematerializing in a transporter beam.) She’s got a reputation for breaking hearts. She’s not afraid to break the Prime Directive for a righteous reason. Like Jim, Jane’s the youngest captain in Starfleet—but as a woman, she’s had to boldly break some glass ceilings no man ever has. “Old assumptions die hard,” a male admiral sheepishly tells her, after she takes him to task for using “code words” like “emotional” and “headstrong” almost never used to describe a man. Jane Kirk’s driven by a fiery spirit as well as by family pride. In this version of J.J. Abrams’ Trek continuity, Jane’s mother took the conn of the doomed U.S.S. Kelvin, and Jane aspires to that same kind of determined, damn-the-photon-torpedoes-full-warp-speed-ahead heroism.

Not all of this Captain Kirk’s crew are as intriguing as she is. Most differ from their male counterparts only by being women, with appropriately feminine first names. Had IDW slated this story to run longer than two months, we might get more insight into them. Ironically, the only other principal player whose alternate we get any real feel for is a man: ship’s communications chief Nnamdi Uhuro, who strives to hold on to traditional notions of chivalry in his romance with a female Spock (apparently an androgynous name).

Even though we don’t get to know them all, I found the simple fact that women compose most of this Enterprise’s crew a valuable check on my own assumptions. In a future where humanity purportedly realizes all people’s worth and practices the equality we still struggle toward today, why should all but one of the main players on Starfleet’s flagship be male? Shouldn’t that fact strike me as strange more often than it does? The only reason it doesn’t, of course, is because I am a male in a society that still privileges masculinity. Simply by their presence in this parallel reality, then, Jane Kirk and her crew challenge the uncritical acceptance of male privilege in our reality—and in the normative Star Trek reality, too.

“No Longer Male and Female…”

I don’t hold the church in most quarters exempt from the need for such challenges, either. We profess to believe that  “there is no longer male and female, for all of [us] are one in Christ Jesus” (Galatians 3:28, NRSV)—not that the differences between women and men are ignored or erased, but that these differences no longer define us, and no longer determine our value. But often we offer too much resistance to the new humanity Christ has created. Too frequently we insist on clinging to society’s presuppositions and expectations about men, women, and their roles.

My denomination affirms, in one of our authoritative statements of faith, that the Holy Spirit “calls women and men to all ministries of the Church” (A Brief Statement of Faith, 10.4). Does that mean all our congregations and all our members always live out that assertion? When I accepted the call to the congregation I served as pastor, one person told me—in the hearing of my wife, who is also an ordained minister in our denomination—what a relief it was to be calling a man to this pulpit. I later learned of women who had also applied for the position, but who were not offered it. Do I know all the reasons why? No. And do I sincerely believe God had reasons for me to serve those people as their pastor for a time? Yes. But I also acknowledge that we are all imperfect followers of Jesus Christ. As the letter to the Hebrews says, sin can cling so closely (12:1)—including the sin of sexism—and can be very hard to shake.

So I’m glad Johnson and Liang are shaking up the status of the sexes in Star Trek, if only briefly. When  the “real” crew inevitably turned up for this issue’s cliffhanger ending, I was disappointed. They seemed so familiar, so dull, by comparison—and they’ve only been with us since 2009! But “Parallel Lives” felt fresh and exciting. In some ways, it’s more of a Trek reboot than the “reboot-without-a-reboot” J.J. Abrams pulled off. It takes a cue from Ronald D. Moore’s reboot of Battlestar Galatica and ups the ante, reversing not only one person’s gender but everyone’s, creating the potential—not fully realized in one issue, but still present—for a ship full of fundamentally new characters.

In nearly fifty years, not many Star Trek stories have seriously examined the role gender plays in shaping identity. As a two-month comic book arc, “Parallel Lives” can likely only go so far in advancing such a discussion—but I certainly plan to pick up next month’s chapter and see what it’s able to accomplish. Having thoroughly enjoyed this issue, I have high hopes.