Since starting our podcast back in 2011, Ben and I have had a lot of requests to read self-published authors’ books. Sometimes the books are bad. Sometimes the books are good. Flight of the Angels, however, is outstanding. The story behind the creation of the book is as interesting as the book itself. Flight of the Angels, a novel written by father and son duo, Allan and Aaron Reini, has been in the works for over ten years. We recently had a chance to sit down with the authors and discuss both the book and its creation. For the full interview, check out Episode 221: Interview with the Creators of “Flight of the Angels” on our website.

Flight of the Angels is set in a future where all forms of religious expression have been outlawed. In this dystopian society, it has become illegal to practice any religion because it is considered intolerant of others’ beliefs. Christianity, in particular, seems to be specifically hated by the people in power. The universe that the story takes place in is well developed and definitely has the “lived-in” feel that made the original Star Wars so endearing.

This book is full of character development, particularly from one of the point-of-view (POV) characters, Darik Mason. I don’t want to give too much away in this review, but Darik is forced to make choices regarding pursuing his life goals or pursuing what is morally right. It was interesting to see him struggle with identifying what gives him his own self-worth. 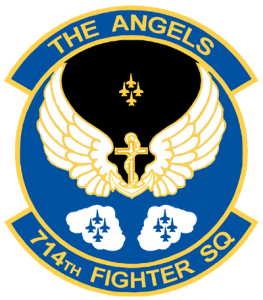 Another POV character is Captain Dex D’Felco, the leader of a team of ex-Navy fighter pilots. Their squadron is known as the Angels, which is what gives the book its name. The Angels had to flee when their own government made plans to kill them because of their religious beliefs, so they now help lead and protect a secret colony of Christians in hiding. Because this story is set in the future, interplanetary travel is not a problem. The main group of Christians that we follow has taken refuge on a distant planet.

Not only is Dex aided by his squadron, but also by a mysterious benefactor known only as Baker. The mystery of who Baker really is and why he has chosen to help the hidden colony made every scene he was in very captivating.

For most of the book, Dex’s storyline doesn’t intersect with Darik’s story. I loved that the authors took a gamble and made readers wait for the great payoff when the stories finally started to weave together.

As I stated above, this world is very believable. Beyond that, there was a sense that no character was truly safe, which raised the stakes and made the reading experience engaging.

Although it is often subtle, supernatural powers appear to be at play within this story. There was a true sense of good versus evil within these pages, and I was constantly questioning who was on each side. While there is a resolution to the story that we are following in Flight of the Angels, there is definitely still a lot more to be learned about what is happening in this world. I highly recommend this book. I can almost guarantee that by the end you will be anxious for more stories from these authors.

For more information on this book and the universe created within, check out:  http://www.flightoftheangels.com/