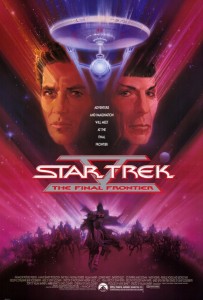 In 1989, I was in high school, dating a girl for the first time. I took her to several movies that summer, but Star Trek V: The Final Frontier wasn’t one of them. I had a hard enough time working up the nerve to ask this young lady out at all; I can’t imagine how hard it would have been to invite her to go see this with me!

Not that I anticipated the film would be bad. How could it be? The franchise seemed to be firing on all thrusters! Three years earlier, Star Trek IV: The Voyage Home had been a big hit with critics, fans, and casual moviegoers alike. And Star Trek: The Next Generation had just finished two successful seasons in first-run syndication. Surely, Star Trek V would prove to be another spectacular milestone in Star Trek‘s new lease on life–especially with Captain Kirk himself in the director’s chair!

So, yes, I went to the theater alone, but only because I was too nervous to let the object of my affections know I was a Trekkie. I was confident the film would be fantastic. In fact, I spotted two grown-up friends from church leaving the showing before mine. “How was it?” I asked. They smiled and gave “thumbs up.” Outstanding! I entered the auditorium ready for a wonderful time.

Two hours later, I left the auditorium feeling vaguely confused, definitely disappointed–and very relieved I hadn’t brought my would-be girlfriend along. (In the interest of the historical record, I should point out we never actually became “boyfriend-and girlfriend.” In some quantum reality, I did take her to Star Trek V, and we had such a great time… nah. Not even quantum theory could serve up that possibility!)

When Star Trek V‘s silver anniversary rolled around last month, I remembered all these thoughts and feelings. But I also remembered telling other people, “I don’t think it’s all that bad.” And guess what? Twenty-five years later, I stand by that statement.

Kirk and Spock read “The Christian Nerd.” Do you?

The Rev. Scott Higa recently gave me the opportunity to say it as a guest contributor at his consistently excellent blog, The Christian Nerd. (If you’re a sci-fi Christian who’s not already reading Scott, you’re reduced two steps in rank; go forth and miss his blog no more!) I invite you to read my reflections at his site, but here are some of my theological thoughts on why Star Trek V doesn’t deserve the disdain it usually receives:

Since we believe God dwells within us, we must remain vigilant against mistaking ourselves for God—of deciding, as did Sybok, that our face suits God best. To his credit, once Spock declares the entity Sybok has been serving is “not the god of Sha Ka Ree, or any other god,” Sybok becomes an iconoclast.

Iconoclasm—the destruction of false images of God—is a major theme in my own, Reformed tradition. My denomination, the Presbyterian Church (U.S.A.), holds as one of its doctrinal standards The Second Helvetic Confession, a Reformed statement of faith from mid-sixteenth century Switzerland. It rejects the use of statues and pictures in Christian worship—“Although Christ assumed human nature,” it says, he did not do so “to provide a model for carvers and painters.” Today, many Reformed Christians have reclaimed the visual arts as good and proper ways to praise God. But we still adhere to the Confession’s insistence that “wherever we turn our eyes, we see the living and true creatures of God which… make a much more vivid impression on the beholders than all the images of vain, motionless, feeble and dead pictures made by men” (Chapter IV). If you want to see God, look first to Jesus as the Scriptures witness to him; then look at the world God loves, and the people God fashioned in the divine image.

On Sha Ka Ree, Captain Kirk calls out “God” not only for needing a starship but also for not knowing him. This can’t be the God praised by the psalm-singer, “who formed my inward parts; [who] knit me together in my mother’s womb” (Psalm 139.13, NRSV).

Dr. McCoy, too, objects: “I doubt any God who inflicts pain for his own pleasure!” He’s a doctor, not a professional theologian, but you don’t need a seminary degree to know God is “merciful and gracious, slow to anger and abounding in steadfast love” (Psalm 103.8, NRSV).

Sybok completes the exposure of this alien as a false god. It is another creature, in great pain (as we all are), unworthy of anyone’s trust or allegiance, but needing compassion. And so Sybok shares its pain, using his empathic and telepathic gifts to give Kirk, Spock, and McCoy a chance at survival.

I also invite you to re-watch, or to check out for the first time, Star Trek V. It still isn’t a great date movie, but it has its points (and I don’t just mean on the Vulcan characters’ ears).

Thanks again to Scott for inviting me to contribute. Seriously–subscribe to The Christian Nerd today!

PS. Once you’ve seen Star Trek V, be sure you watch this, quite possibly the greatest repurposing of behind-the-scenes “interview” footage ever. (There is a very brief bit of manufactured, middle school-esque “naughtiness” midway through; if you are a parent, guardian, or other trusted adult, preview the whole thing before showing to anyone under 13 or so.) You’re welcome.