What do you think of the opening title sequence Doctor Who is using? The grinding gears, the spiraling Roman numerals, the fly-by of Peter Capaldi’s mysterious eyes, the piercing electronic whine… It all creates an alien, unnerving, cold atmosphere. I don’t know whether this sequence will become one of my favorites (it was inspired by a fan’s creation, so that’s cool), but I do think it suggests important aspects of Capaldi’s Doctor. As “Into the Dalek” demonstrates, our favorite Time Lord, for all that he looks human, is alien, fully capable of being unnerving and cold.

I felt unnerved watching the Doctor sacrifice Ross (Ben Crompton) to the Dalek antibodies. “Trust me,” he tells the frightened soldier. Whenever spoken by David Tennant’s or Matt Smith’s Doctors, that phrase usually preceded the production of some near-miraculous ace from the Doctor’s sleeve.

Not now. The Doctor wrings an advantage from Ross’ death only by deciding Ross was “already dead” from the moment he shot his grappling hook down “Rusty” the Dalek’s gullet. It’s a Machiavellian moment, jarring for a character who professed only last week that human beings are “never small” to him. Had the Doctor told Ross the truth, had he called on him to make his death a conscious, willing contribution to the mission’s success—as Gretchen Allison Carlisle (Laura Dos Santos) bravely does, minutes later—he could have honored Ross. Instead, he treats him as someone whose death can be dismissed with a crack about “saying a few words” over the top layer of goo in Rusty’s gut. Journey Blue (Zawe Ashton) is right to demand better, and the Doctor is right to step back as he realizes Gretchen’s noble intent. Throughout this episode the Doctor paints soldiers with a broad, disparaging brush (has he forgotten the Brigadier?), but the crew of the Aristotle strike me as women and men of whom the Doctor is not worthy.

The Doctor’s betrayal of Ross’ trust advances the episode’s thesis: The Doctor is, in important ways, little different from his enemies. It’s not a ground-breaking idea. In 2005’s “Dalek,” Christopher Eccleston’s Doctor was told, “You would make a good Dalek.” Even so, Rusty’s blunt assertion of the point, no longer hypothetical—“You are a good Dalek”—is riveting. When we see the Doctor from Rusty’s point of view, bathed in the baleful blue light of the Dalek’s eyestalk, his gaunt features appearing as though carved from ice, we’re forced to ask, “Can we admire and cheer for a man like this, capable of such coldness?” His subsequent spurning of Journey as a potential companion, even after acknowledging her kindness and bravery, only reinforces that the Doctor can be as cruel as his foes.

This episode tells us about the Doctor’s hatred of Daleks. It does a better job showing a different trait: his arrogance. The Doctor decides it is too light a thing that he make Rusty good again. He sets out to make all Daleks good. 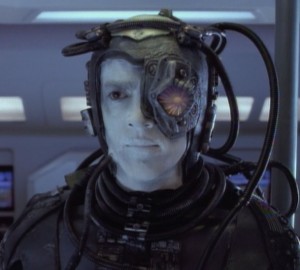 “Into the Dalek” reminded me of “I, Borg,” one of Star Trek: The Next Generation’s standout episodes. The Enterprise crew’s plan to introduce individuality into the Borg Collective was audacious, but also modest. Captain Picard didn’t claim to know exactly what would happen if he sent one drone with fledgling free will and independent thought back to the hive mind, but he hoped for the best: “The knowledge of self being spread throughout the Collective… might alter them forever.” He even made sure the drone, Hugh, participated willingly. It was a high-stakes plan, pursued with caution and humility, staying true to Starfleet and the Federation’s values and ideals.

In contrast, the Doctor pursues his high-stakes plan recklessly. He forces his way into Rusty’s mind to harangue him about the beauty of the cosmos and the inevitability of universal rebirth, so confident that, as he promised Gretchen, he’s doing “something amazing.” He declares, “I can save the future!” His intent may be noble (though I’m unsure), but his plan is staggeringly arrogant. It’s full of hubris worthy of the “Time Lord Triumphant” who supposedly learned better in “The Waters of Mars.” Instead of saving the future, the Doctor provokes more death and destruction in the present. He identifies himself as standing against all the Daleks stand for—“The Doctor is not the Daleks!”—but his actions reveal an uglier truth.

I enjoyed “Into the Dalek.” I appreciated the spectacular special effects. I welcomed Clara’s importance as an active problem-solver and the Doctor’s much-needed conscience (as he flippantly admits, “She cares so I don’t have to”). I’m intrigued by Danny Pink (Samuel Anderson), a former soldier who, like Journey, gives the lie to the Doctor’s prejudice against members of the military.

And I found the episode a powerful parable about the corrupting nature of hate and pride. “Hatred stirs up strife,” ancient Israel’s sages cautioned (Proverbs 10.12). God calls us to rid ourselves of it. God’s Law commands, “You shall not hate in your heart anyone of your kin… You shall not take vengeance or bear a grudge against any of your people, but you shall love your neighbor as yourself” (Leviticus 19.17-18). Jesus reiterates the commandment to love, and makes clear how expansive God’s definition of “neighbor” is: “You have heard that it was said, ‘You shall love your neighbor and hate your enemy.’ But I say to you, Love your enemies…” (Matthew 5.43-44). The Holy Spirit seeks to root hatred from our heart because it poisons us. It keeps us from growing into the image of Christ; instead, as the Doctor finds (again), it twists us into the image of what and who we say we oppose.

These truths demand attention from us as individuals and as a society. As our nation weighs possible responses to our enemies, will we meet hate with hate? Will we undertake action that claims moral high ground but may be reckless and arrogant, threatening to turn us into what we claim we oppose? Or will we find ways to act that stay true to our highest values and ideals, so that our deeds as well as our words say, “We are not you?”

I don’t have easy answers for these questions, any more than Clara did for the Doctor’s question, “Am I a good man?” Like her, I’m not sure I know who this man is—and, were this episode my only exposure to him, I’m not sure I’d second her charitable conclusion that he tries to be.