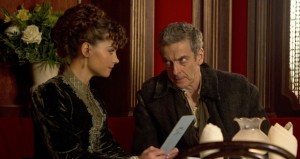 “Deep Breath” offered a welcome reunion with characters I’ve missed in the months since Doctor Who last aired. Jenna Coleman delivers her strongest performance as Clara yet, blending vulnerability and broken-heartedness over the Doctor’s sudden transformation with compassion, intelligence, sharp wit, and admirable gutsiness. Thank goodness she is freed from being “the Impossible Girl” (except for the reference in that mysterious newspaper advert) for life as a fully realized, fully engaging character!

The Paternoster Gang is always a treat. Whenever Moffat moves on from running Doctor Who, the BBC really should put him to work developing a spin-off for Madam Vastra, Jenny, and Strax; at the least, this trio deserves a Big Finish audio range to themselves.

And who is Missy? Yes, this year’s big bad, but who is she really? I have not watched the Classic Who stories starring the Rani—a renegade Time Lord (Time Lady?) whose complicated, antagonistic history with the Doctor did at some point involve a Tyrannosaurus Rex—but what little I’ve read and seen of her in reference volumes and Whovian websites makes me wonder whether she is the latest

But naturally, Capaldi commands the audience’s attention. Capable of being silly and somber, endearing and infuriating, Capaldi at every turn demonstrates thorough and thoughtful mastery of his role. As Karen Gillan said last month, the show is “in safe hands” with its new leading man.

Of course, in “Deep Breath,” it’s not the Doctor’s hands that receive the most focus, but his face.

Clara doesn’t easily accept this gray-haired, care-lined visage. Matt Smith’s Doctor (in the summer’s best cameo—sorry, Marvel Studio post-credits stingers) phones from Christmas past, on Trenzalore, and tells Clara he hopes he doesn’t now look old. Even the Doctor is dismayed as he considers his new countenance: “Who frowned me this face?” he demands. He’s especially upset with his “independently cross,” “Scottish” eyebrows (a wickedly funny shout-out to Scotland’s impending secession referendum): “These are attack eyebrows. You could take bottle tops off with these!”

But Vastra insists the Doctor’s new features appropriately reflect his identity: “He has walked this universe for centuries untold. He has seen stars turn to dust.” And the Doctor decides he subconsciously selected this face for a reason, “like I’m trying to tell myself something, like I’m trying to make a point.” In “The Day of the Doctor,” the Tenth Doctor (echoing the Seventh) referred to regeneration as “a lottery,” but the Twelfth Doctor’s comments suggest that each renewed appearance stems from more than random chance. (But if the Doctor can influence the process’ results, surely he’d have regenerated as a redhead at least once by now?)

Abraham Lincoln reportedly once rejected a candidate for his cabinet because he disliked the man’s face. “The poor man isn’t responsible for his face!” someone objected. Lincoln replied, “Every man over forty is responsible for his face.” Maybe Lincoln simply meant that proper grooming is part of being a grown-up, but I’ve always suspected he meant more. Maybe “Honest Abe” meant that maturity involves ensuring the face we show the world is a true face, revealing our essential character and deep commitments.

If the Doctor’s new face proves true in this way (and remarks from Steven Moffat I read last year make me think it will), then it may provide a parable for Christians as we seek to present faithful faces to God and the world.

To God, “all hearts are open, all desires known; and from [God] no secrets are hid,” in the lovely language of the Anglican collect for purity. God sees us as we are whether or not we present true faces to him—but it’s far better that we do. “You desire truth in the inward being,” prays the psalm-singer (Psalm 51.6a), not so much for God’s benefit as for our own, that we might experience the freedom God gives when we stop trying to hide our faces from him, as humanity’s been trying, in vain, to hid ever since the Garden of Eden (see Genesis 3.8). “Look to him, and be radiant; so your faces shall never be ashamed” (Psalm 34.5), for God waits to look upon our faces with the forgiveness and love we see in Jesus’ face, the face he “set toward Jerusalem” (Luke 9.53) where he would offer his life for us and for the world.

In the world, we sometimes get away with wearing false faces; but God calls us to deal with our neighbors in the same relationship-restoring, community-building, honest and truthful way that God has dealt with us. Only a true face will do.

As the Doctor spins up the TARDIS’ time engine toward this episode’s end, he tells Clara, “I’ve lived for over 2000 years, and not all of them were good. I’ve made many mistakes, and it’s about time I did something about that.” Will he spend time this series revisiting some of those wrong choices and flawed decisions, repenting of them and trying to set them right? Will he be showing a true face to the world? 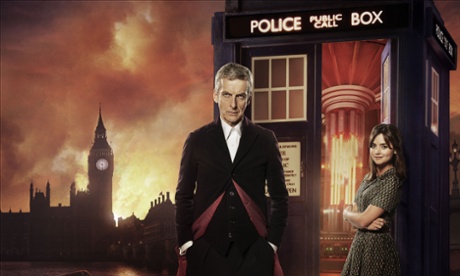 Whatever the Doctor does, we who have seen “the light of the knowledge of the glory of God in the face of Jesus Christ” (2 Corinthians 4.6) have been commissioned, like Moses, to move into the world with shining faces, reflecting that glory in our own features (see Exodus 34.29). Jesus commands congruence between our faces and our faith. We aren’t to go about with “dismal,” disfigured faces “like the hypocrites” do when they fast, for example, but are to wash our face and anoint our head with oil to show, not our fasting, but our joy in the Lord (see Matthew 6.16-18).

Do you like your face—your real face? Is it a “cross” face, as the Doctor says his newest face is… or is it a face marked with the Cross of Christ, revealing his values, reflecting his light and love?