It’s not one of The Next Generation’s best episodes—but may be one of its most important. 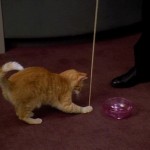 Spot scratches chairs, breaks knickknacks, hides under beds and jumps on computer consoles, coughing up hairballs in her wake—in Data’s words, “the full range of feline behavior.” She can’t be trained; she’s a small but real “force of nature” herself. It’s not she who must adapt to Data; Data must adapt to her. Watching Data absent-mindedly unroll a ball of yarn for Spot, Geordi wryly tells him, “I don’t know about Spot, but it seems to me your training is coming along just fine.”

In his Star Trek: The Next Generation Companion, Larry Nemecek details how “Force of Nature” suffered from “shooting deadlines” and “a stripped-down script [that] shows the padding of hastily written” subplots. Scriptwriter Naren Shankar told Nemecek, “It wasn’t one of my finer moments.”

I think Shankar sells this episode short. That Spot subplot shows we can’t always expect nature to accommodate us. Instead of always “training” the natural world to serve us, we must sometimes re-train ourselves that we might live in harmony with it. 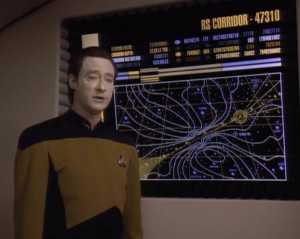 The Enterprise crew discovers this truth in the Hekaras Corridor, the only safe zone through which warp-powered vessels may cross a tetyron-tossed sector of space. Unfortunately, those passing ships’ warp fields are wreaking havoc on the orbit and climate of inhabited planet Hekaras II, as well as the fabric of space-time itself. “Subspace will extrude into normal space,” explains Data, “forming a rift.” Serova (played by Margaret Reed)—the Hekaran scientist who, with her brother Rabal (Michael Corbett), discovered the danger and wants to warn Starfleet of it—more bluntly states the stakes: “You’re killing us.”

Geordi initially rejects the idea that the “proven technology” of warp drive could be harmful. Here’s where the episode’s other subplot—Geordi’s rivalry with another starship’s chief engineer—illuminates the main one. His quest to wring every bit of power he can from the Enterprise’s engines isn’t motivated simply by a desire for efficiency; he admits to Data, “It’s more a point of personal pride.” Geordi’s extreme confidence in warp technology and his own mastery of it thus prevents him from considering its potentially catastrophic consequences. “There’s no point in trying to talk to you,” Serova tells him. “You’ve already decided not to listen.” Only Serova’s desperate decision to explode her ship, unleashing enough warp energy to open the kind of subspace rift she predicts, makes Geordi pay attention.

Data tries to soothe Geordi’s conscience, reminding him, correctly, that Serova proved her theory “using methods any reputable scientist would never employ.” But Geordi remains haunted by the fact that “she was willing to die to make her point… maybe I was a little threatened.”

“When pride comes,” ancient Israel’s sages taught, “then comes disgrace; but wisdom is with the humble” (Proverbs 11.2). Setting personal pride aside to face truth, especially when we feel it threatens us, is hard. But when we humble ourselves before truth, we can grow more into the people God created us to be. All truth ultimately comes from the One who called himself the Way, Truth, and Life (John 14.6). “If we reflect that the Spirit of God is the only fountain of truth,” wrote John Calvin, “we will be careful, as we would avoid offering insult to him, not to reject or condemn truth wherever it appears.”

Time to Make It Better? 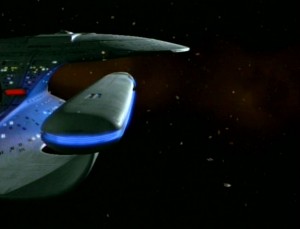 “Force of Nature” closes as Picard gazes at the stars and muses, “I’ve spent the better part of my life exploring space… now it seems all this while I was helping to damage the thing I hold most dear.” Geordi reassures him, “It won’t turn out that way, Captain. We still have time to make it better.”

Geordi’s confidence is well-placed. As soon as Starfleet Command sees scientific projections of how unchecked warp travel will gradually erode susceptible areas of space, it imposes a warp five speed limit, to be exceeded only in emergencies. Eventually, the warp limit was mentioned only a handful of times going forward before being quietly forgotten. Even so, the effort was a small step toward bolder revisions of Star Trek to come. Starfleet is, in this story, an organization that, when faced with compelling evidence of the need for change, changes.

We, too, are faced with compelling evidence of the need for change. Twenty years ago, Shankar wrote this story as Trek’s take on concerns about the hole in Earth’s ozone layer. Fortunately, society made necessary changes, and that hole is now shrinking. Unfortunately, we now face larger environmental challenges—and time to make them better is running out.

Fully 97% of active climate scientists agree that climate change is real. The world is warming faster than ever, and human activity is the main cause. As we continue burning coal, oil, and natural gas to power our civilization, we continue to put nothing less than the human future at risk. The Intergovernmental Panel on Climate Change’s latest report, being presented at today’s United Nations Climate Summit, warns that if we stay our current course, “severe, pervasive and irreversible impacts for people and ecosystems” will result.

One of my denomination’s doctrinal standards, A Brief Statement of Faith, confesses we “exploit neighbor and nature, and threaten death to the planet entrusted to our care.” Almost right. We indeed do much damage to God’s good Earth—this beautiful, balanced garden where God placed us, granting us authority and responsibility for responsible dominion, not reckless domination, of it (see Genesis 1.28, 31; 2.15). And while we do “threaten death” to too many of our fellow human beings as well as other living creatures, I think Neil deGrasse Tyson is right to say, “Earth will be here long after we render ourselves extinct.”

In raising Jesus from death, God decisively declared that the divine will is life, in abundance (John 10.10)—not just life in the new world to come, in which “the first things [will] have passed away” (Revelation 21.4), but in this old world, here and now. It’s not our ultimate home—but it’s the only home we’ve got. If we want to be God’s faithful stewards of it, we must, now faced with compelling evidence of the need to change, change.

Not Easy At All

Geordi tells Rabal, “We depend on warp drive. I just don’t know how easy it’s going to be to change.” Unflinching, Rabal answers, “It won’t be easy at all.”

Rabal is right. There are some easy things individuals and communities can do to fight climate change, but by themselves they won’t be enough. There are larger ways to get involved with environmental activism, but they, by themselves, won’t be enough, either. The necessary changes won’t happen overnight, or without confronting political and economic powers with vested interests in “business as usual.”

But if concerned people do what they can, as often as they can, real change can happen. Star Trek and science fiction fans may know this truth. Christians should know it even more, for we have seen how God’s realm can break into and transform the world through small actions by ordinary people.

If you haven’t seen “Force of Nature” in a while, or if you’ve never seen it—don’t bother. It’s not as bad as its writer remembers it, but whether his, or Larry Nemecek’s, or your opinion of it changes doesn’t matter. You’d be better off using that time doing to help humanity re-train itself for a harmonious life with nature. In the fight against climate change, time is a precious commodity. As Geordi told Picard, we do have enough of it to “make it better.”

All Scripture quotations are from the New Revised Standard Version. I am indebted to Keith Mathison’s article “All Truth is God’s Truth: A Reformed Approach to Science and Scripture” (11 May 2012; http://www.ligonier.org/blog/all-truth-gods-truth-reformed-approach-science-and-scripture/) for the Calvin quotation. Photos from tng.trekcore.com, http://www.thepensivecitadel.com/2009/09/11/merde-star-trek-tngs-worst-episodes-ever/ (Spot),  and http://en.memory-alpha.org/wiki/Force_of_Nature_(episode) (Data).