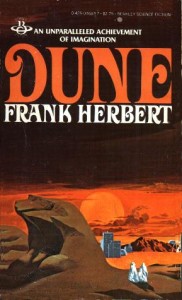 At Dune’s center is Paul Atreides, the son of a duke who, after his father’s assassination, is thrust into a struggle for survival among the Fremen, nomadic inhabitants of the desert planet Arrakis. He is also, though he doesn’t know it, the Kwisatz Haderach: the product of a centuries-long program of selective breeding carried out by the Bene Gesserit, a manipulative religious sisterhood. They sought to create a messianic figure and, in Paul, they succeeded. But Dune follows him as he redefines his special identity, rising to power as the Fremen leader “Muad’Dib,” recreating himself and his world in ways the Bene Gesserit never anticipated.

David Lynch’s oft-maligned film adapation of the book ends with a scene that isn’t faithful to the novel’s text but does dramatize the new life Paul brings to the planet and its people:

During Advent, Christians remember how so many of God’s people longed for a Messiah, a Savior, from King David’s lineage. “A shoot shall come out from the stump of Jesse,” said the prophet Isaiah, “and a branch shall grow out of his roots” (Isaiah 11.1). Jesse was David’s father, and a many-times great-grandfather of Joseph, Jesus’ adoptive father. The prospects for a king of Davidic stock seemed dead, stump-like, by the first century C.E., but Jesus, as Joseph’s adopted son, was, as the old hymn says, “great David’s greater son.”

But he was also the son of some seemingly unlikely characters. Matthew mentions four female ancestors of Jesus in the genealogy (1.1-17)—not that common an ancient Jewish practice. And these particular women—Tamar, Rahab, Ruth, and Bathsehba—all “were either Gentiles or had significant Gentile associations” (Craig Keener), and were involved in sexually scandalous situations.

The family tree of the “flower of Jesse” isn’t some perfectly pruned, gleaming and glittering holiday Tannenbaum. It’s messy because it’s made up of real people—people like you and me, people whom Jesus is unashamed to call brothers and sisters (Hebrews 2.11). He is God’s unexpected answer to our longing for a Savior. We can either play the Bene Gesserit, rejecting the radical new life God creates; or, like the Fremen, we can welcome it and him, as we would welcome miraculous and  refreshing rain in the desert, a downpour of grace that will cause it “to rejoice and blossom” (Isaiah 35.1).

before you earthly rulers will keep silent,

and nations give you honor:

Come quickly to deliver us.