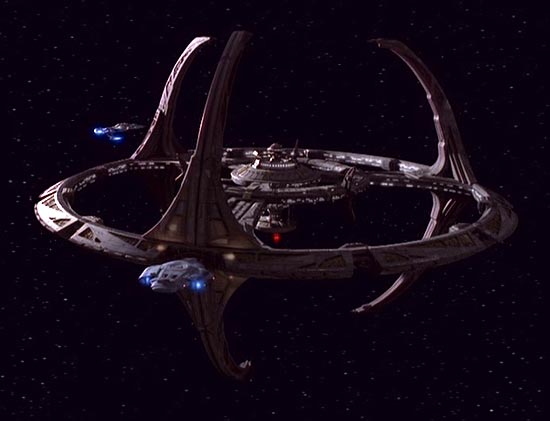 Deep Space Nine frequently comes under fire from Star Trek fans for being “too dark,” “too militaristic,” “too grim”—in other words, too far from Gene Roddenberry’s bright, shining vision of the future. I used to level such criticisms at the show myself. But I’ve come to appreciate and admire DS9. Its characterizations are the richest by far in any Trek series; its frequent, multi-episode story arcs broke new ground for the franchise and anticipated the highly serialized TV dramas of today; and it did generally hold true to Trek’s optimistic take on where humanity’s headed.

It did so, however, in its own way. All Trek presents a near-utopian tomorrow for future humanity. Only DS9 stubbornly holds viewers today accountable for starting the honest soul-searching and hard work needed to get there.

Consider the third season’s two-parter “Past Tense.” A transporter malfunction sends Sisko, Bashir, and Dax back in time to San Francisco, 2024. Sisko and Bashir end up in one of the “Sanctuary” districts established for the thousands of people without shelter, food, and work. Intended as secure refuges, the Sanctuaries have become instead blighted, brutal, overpopulated ghettos where society’s most vulnerable members simply survive, fighting each other for basic necessities while the outside world ignores them. The Sanctuaries are, in effect, prisons for the poor, sequestering them “out of sight, out of mind” from those who are more fortunate.

In Trek’s future history, a major riot in the San Francisco Sanctuary was a “watershed event” that made the “haves” start caring again about the “have-nots.” As fate would have it, Sisko and Bashir arrive just in time for those riots. When Gabriel Bell, a man history remembered as a hero for sacrificing his life to protect hostages in the riot, is prematurely killed, Sisko takes Bell’s place. He struggles to protect those hostages, in order to preserve the timeline and to ensure that early 21st-century America seizes this moment to free itself from futility, for a better way. As Gabriel Bell—a wonderful name that evokes the annunciation and ringing forth of good news—Sisko acts as a liberator.

The key of David symbolizes God-given royal authority (Isaiah 22.22). God has given “all authority in heaven and on earth” to Jesus (Matthew 28.18). Jesus applied other prophecy to himself as a declaration of his authority to act as liberator: “The Spirit of the Lord is upon me… to bring good news to the poor… to proclaim release to the captives… to let the oppressed go free” (Luke 4.18; cf. Isaiah 61.1).

Jesus was born into and lived in poverty. In assuming flesh, the Son of God assumed society’s most vulnerable flesh. As his mother joyously sang, his birth signaled God’s dethronement of the rich and powerful, and God’s exaltation of the hungry and humble (see Luke 1.52-53). He was born to liberate everyone from the shackles of injustice—surely those who are its victims, but also those guilty of the victimization.

This Advent, we Christians could do worse than to ponder Bashir’s question to Sisko. Have we forgotten how to care? If so, what will it take to make us remember how to care again? The birth, life, death, and resurrection of Jesus reveal that “the present form of this world is passing away” (1 Corinthians 7.31). God’s great liberation is underway. Are we ready to be freed, and—even though it will take some time and won’t be easy—to do the work of freeing others?

Scepter over the house of Israel,

you open and no one can close,

you close and no one can open:

Come to set free the prisoners

who live in darkness and the shadow of death.