“Uneasy lies the head the wears the crown,” wrote Shakespeare. Since its return in 2005, Doctor Who has featured three British queens who could testify to the weight of royal responsibility.

In “Tooth and Claw,” Queen Victoria escapes death by werewolf thanks to the Doctor, only to realize that the Time Lord represents a different kind of threat against which she feels she must act. Moments after she dubs him “Sir Doctor of Tardis,” she banishes him, along with “Dame Rose,” from her realm:

I don’t know what you are, the two of you, or where you’re from, but I know that you consort with stars and magic and think it fun. But your world is steeped in terror and blasphemy and death, and I will not allow it. You will leave this shores and you will reflect, I hope, on how you came to stray so far from all that is good, and how much longer you will survive this terrible life.

Victoria also establishes the Torchwood Foundation “to investigate these strange happenings and to fight them… And if this Doctor should return, then he should beware, because Torchwood will be waiting.”

Victoria isn’t the only queen who’s had it in for the Doctor. In “The Shakespeare Code,” Good Queen Bess called for the Doctor’s head:

We wouldn’t find out why until last year’s fiftieth anniversary special, “The Day of the Doctor.” The Doctor was the “Virgin Queen”’s absentee husband! 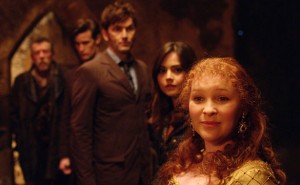 During the special itself, we saw the Doctor and Elizabeth on friendlier terms. We also learned Her Majesty was more than capable of personally defending her imperiled kingdom from danger, including her own Zygon duplicate. “I am the real Elizabeth,” she announced as she revealed her dagger. “My twin is dead in the forest. I am accustomed to taking precautions… I may have the body of a weak and feeble woman, but at the time, so did the Zygon.”

My favorite British queen from Doctor Who is the fictional one: Liz Ten, future ruler of Starship UK in “The Beast Below.” Liz is also a take-charge woman of action, not content to let others keep her from exercising her royal responsibility to protect her people. In her case, however, that sense of duty leads her to discover the terrible course of action she and her subjects have taken, again and again, to preserve themselves. Fortunately, once Amy and the Doctor force her to confront the painful truth, Liz has the strength to make a new, correct choice: “She says there will be no more secrets on Starship UK.” 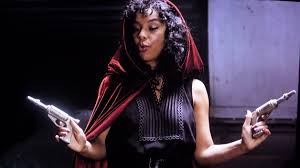 The Bible’s ideal monarch is one who “delivers the needy when they call, the poor and those who have no helper… From oppression and violence he redeems their life, and precious is their blood in his sight” (Psalm 72.13-14). Although Scripture, written in a patriarchal culture, assumes such a ruler will be a king, these three characters from Doctor Who remind us that queens, too, can honor their responsibility to protect their people.

Jesus Christ is the perfect monarch: not because of his maleness, but because he sacrificed himself for his subjects. He delivered us when we were most needy—“while we were still weak… [and] while we were still sinners” (Romans 5.6, 8)—by delivering himself to death on the cross. The only crown on his head was one made of thorns. And so the heavenly host praise him as worthy: “for you were slaughtered and by your blood you ransomed for God saints from every tribe and language and people and nation,” making them “a kingdom and priests serving our God” (Revelation 5.9-10). We honor our perfect monarch, then, when we do what we help those without other help, those the King who will return calls “the least” of his brothers and sisters.

O Ruler of the nations,

Monarch for whom the people long,

you are the Cornerstone uniting all humanity:

Come, save us all,

whom you formed out of clay.

One comment on “Advent Antiphons in a Sci-Fi Key: December 22 – King of the Nations”