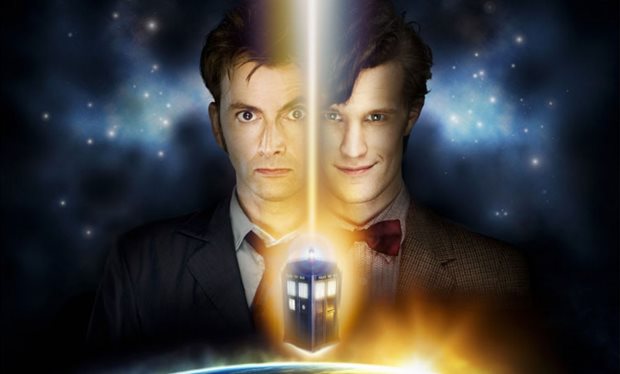 Could Doctor Who have been feted with any more spectacle, fun, and affection than it was in “The Day of the Doctor?” I don’t think so. Steven Moffat spun his strongest Who tale since “The Big Bang.” Writing a story to celebrate the venerable franchise’s half-century mark couldn’t have been easy, but Moffat met the moment (no pun intended) with courage, cleverness, and charm.

Moffat was aided and abetted by a remarkably talented cast. Matt Smith was at his simultaneously brilliant and batty, fast-talking, fez-tossing, hand-flapping best (LOL), and David Tennant effortlessly slipped back into his “proper skinny” suit and “sandshoes.” It’s obvious the two men had great fun working together; the meeting of Doctors Ten and Eleven (well, I say Ten and Eleven…) in an Elizabethan forest–with the reign and life of Elizabeth I herself on the line–makes me grin each time I watch it. 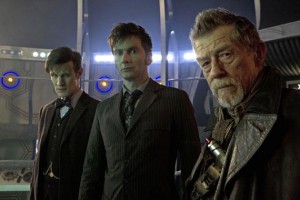 As the “War Doctor,” John Hurt almost steals the show from them both, however. Based on what we glimpsed of him in “The Name of the Doctor” and “The Night of the Doctor,” I feared this “new” Doctor would be the grim-and-gritty villain of the piece. Instead, I am delighted by Hurt’s portrayal of the Doctor in the moments before The Moment. Hurt can conveys the physical and emotional toll of the Time War with a look—and convince me that, even on “the day it wasn’t possible to get it right,” the Doctor’s light had not been entirely consumed by darkness (“Why are you pointing your screwdrivers like that? They’re scientific instruments, not water pistols!”).

I applaud the decision to bring back Billie Piper. As the “Bad Wolf Girl” Interface, she is, yeah, a little hot (as one of the script’s early jokes puts it, letting us know this show won’t be all serious business), a little creepy, and a lot compelling. I also found myself genuinely enjoying Jenna Coleman as Clara for the first time since “The Snowmen.” No longer “the Impossible Girl,” she shows herself a capable Companion, especially in her private conversation with the War Doctor. Only her clear eyes see the significance of the War Doctor’s still young ones, allowing her to plant a seed of change she then helps Smith’s Doctor fully grow. 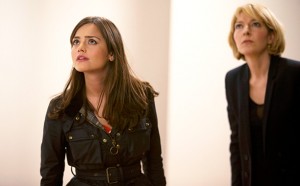 “The Day of the Doctor” has no shortage of impressive female characters. Joanna Page is a formidable Queen Elizabeth (“I may have the body of a weak and feeble woman, but at the time, so did the Zygon”). Jemma Redgrave made a welcome return as Kate Lethbridge-Stewart, smart and strong-willed and not to be trifled with. And I hope we’ll see Ingrid Oliver come back as Osgood sometime. Although she “prays” to the Doctor to save her, she’s able to save herself when circumstances demand, as that quick jerk of the Tom Baker scarf from under her Zygon duplicate’s feet makes clear!

I don’t want to slight the behind-the-scenes wizards. Visually, “The Day of the Doctor” feels more cinematic than any of the “standalone, movie-style episodes” from series seven. A few moments did seem manufactured mostly for 3D, but overall, the special surpassed the modern series’ consistently high special effects standard. Watching the Time War unfold in all its Star Wars-esque CGI glory was especially exciting. (The TARDIS crashing through the wall into those waiting Daleks, knocking them over like so many bowling pins? Outstanding!)

I hope the powers that be over at Star Trek, no doubt already eyeing their franchise’s fiftieth anniversary in 2016, were watching carefully. This is how you mark such a milestone: honoring the past with passion and panache, while at the same time charting a fresh new direction for the future.

And now for some internecine grumbling…

Remember that little ditty Martin Short’s character in Father of the Bride sings? “Every party needs a pooper, that’s why we invited you?” I was humming it as I listened to our own Ben De Bono and Matt Anderson rain on Who’s parade in their comments on the special. I know, they said they liked it. But were we watching the same show? I have ready answers for at least three of their objections. 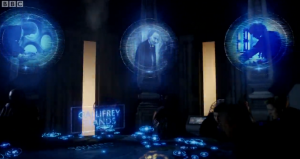 I grant that Matt and Ben make the valid point that Doctor Who continuity problems can be challenging and sometimes impossible to solve. (See my own attempt to come to peace with “The Wedding of River Song” and, frankly, series six as a whole!) Why did a baker’s dozen of Doctors show up all at once to shove Gallifrey off to a pocket universe? As I told a friend who asked the same question, “I don’t know, but it sure was cool.” Sometimes for Moffat, that’s motivation enough.

On the other hand, Doctor Who in its modern form is rarely real science fiction. Moffat has contended repeatedly that it is a fairy tale, and fairy tales adhere to the logic of dreams and unfettered imagination, and to the longings of the heart. But Moffat has also made Doctor Who a magic show. Magic show audiences strike this contract with the illusionist: “We’ll suspend our disbelief in order for you to fool us, as long as you make it worth our while.” “The Day of the Doctor” doesn’t make perfect sense—but every single one of its seventy-five minutes makes me feel perfectly entertained.

“See, Everything Has Become New!”

Matt and Ben did raise a question that occurred to me, too: Did the Time Lords deserve to be saved? In its previous allusions to and depictions of the Time War, Doctor Who has revealed (not, I gather, without classic series precedent) that Gallifreyan society had become corrupt and immoral. We learned in series three, for example, that the Council essentially created the Master as a living weapon, driving him mad by planting that incessant drumbeat in his mind. In “The End of Time,” we saw Rassilon was more than willing to claim a Earth for Gallifrey’s rebirth. The Doctor believed the Time War made his people no better than their enemies; and if we take “The Night of the Doctor” seriously, we must believe that conviction motivates the War Doctor, too. How, then, could he and Tennant’s Doctor agree with Smith’s Doctor’s plan to preserve Gallifrey?

It’s a good question, but I think it’s easily answered. As the Doctor states, he’s had four centuries to think over his actions—and he’s changed his mind. And if we sci-fi Christians don’t find that answer satisfactory, we might ask what that dissatisfaction says about us. Can Christians, who profess to be saved by grace alone (Eph. 2.5), ever resent the gift of a second chance? Dare we risk acting like Jonah, camped out under a sorry little bean plant on Nineveh’s outskirts, complaining that God has changed the divine mind, lamenting God’s decision to really be gracious and merciful, “slow to anger, and abounding in steadfast love” (Jonah 4.2). No, the Doctor is not God—but how can we feel anything but glad that he, in effect, shows mercy to his own world—especially, to its over two million children, innocents caught in the crossfire who, like the citizens of Nineveh, “do not know their right hand from their left” (4.11)? 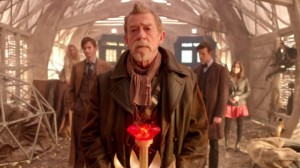 The Doctor extends grace and mercy not only to Gallifrey but also to the Doctor himself. I felt so torn watching the three Doctors place their hands, together, on the Moment’s Big Red Button. With Clara, I wanted them not to press it; but I at least appreciated that Tennant’s and Smith’s Doctors were acknowledging and acting in solidarity with Hurt’s. In that scene, the Doctor owns up to his past in a new and painful way. He has mentioned more than once what he’s done, but now he squarely faces and claims his action as his own. In order for us to experience growth and new life, we also must own up to the actions for which we’d rather deny responsibility. We must claim the faces we try to keep hidden, even from ourselves—for they are not hidden to God.

In the end, of course, the Doctor(s) rewrite(s) his (their) own history (whew!), and “The Day of the Doctor” is a day of new beginnings. The removal of Gallifrey from the field of battle strikes me as an event J.R.R. Tolkien would term a eucatastrophe:

…the sudden joyous “turn” (for there is no true end to any fairy-tale)… [the] sudden and miraculous grace: never to be counted on to recur… [denying] universal final defeat and… giving a fleeting glimpse of Joy, Joy beyond the walls of the world… (“On Fairy-Stories”) 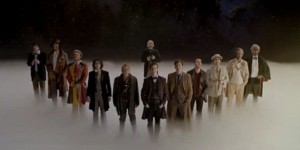 As with all good birthday parties, the dominant tone is joy. The Doctor gives his world and himself the gift of new direction, new hope, new life. It may not be “sudden” from his point of view—again, he’s had four hundred years to work the calculations (at last, that unresolved age discrepancy from series six pays off!), but it is sudden from ours; and, from any vantage point, it is miraculous. Wherever we see new direction, hope, and life breaking forth, the ultimate cause is the same grace and love of God we see in Jesus Christ, in whom “everything old has passed away; see, everything has become new!” (2 Cor. 5.17). The Doctor is reconciled to Gallifrey, to himself, and—“Who knows?”—to a new, future homecoming, even if it will be “the long way ’round.”

If the BBC teaser for Matt Smith’s impending last “Geronimo” is to be trusted, we are not done with Trenzalore, the Silence, or the First Question in the short run. But “The Day of the Doctor” has set a refreshing and resoundingly joyful new direction for Doctor Who in the long run. I look forward to seeing to what hopeful places this madman with the magic, blue box take us as the program’s fifty-first year begins.