This is the second in a three part series from Ben on literature and literary appreciation.Find the first part here and look for the third later this month

Every now and then I find myself logging onto Goodreads or Amazon to read through one-star reviews of classic works of literature. I’m not entirely sure why I do this – probably some bizarre sort of literary masochism – but whatever the reason, it never fails to amuse and horrify me. There are the reviews complaining that Shakespeare’s plays weren’t enough like the movie. Others fault Dante for not being sufficiently scary or failing to live up to the high literary standards set by the Twilight series. Or there’s my personal (least) favorite, a review of Virgil’s Aeneid, which dismissed the poem as bad Homer fanfiction.

These are obviously extreme examples (or at least I hope so!), yet they illustrate a problem many people encounter when trying to read classic literature: it’s hard and often not at all what we expect.

The classics rarely conform to our ideas of how storytelling should work. The “cool” imagery of the Inferno is largely absent in the increasingly abstract final two-thirds of The Divine Comedy. Homer dedicates hundreds of lines to describing the ships and armor of the Achaeans and Trojans. Shakespeare often requires consulting the footnotes several times a page so that by the time we understand what he’s saying, we’ve forgotten why we should care.

It’s at this point our enthusiasm dries up, we decide these books are garbage, and we go back to marathoning every episode of Law and Order.

I can empathize with the problem – indeed I’ve been there many times myself. Yet, over the years, I’ve found a way around it. The secret is a change in perspective. Rather than approaching classic literature the way we do our favorite TV series or the latest superhero movie, we need look at it the way Sam Gamgee learned to look at the elves. 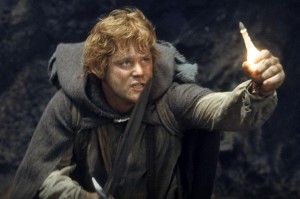 In The Fellowship of the Ring (I’m referencing the book here, not the movie), Sam Gamgee has only one item on his wishlist for his journey with Frodo: He wants to meet the elves. It isn’t long before he gets his wish. Just a day or two into the journey, he, Frodo, and Pippin meet a company of elves. After staying the night with them, Sam and Frodo have this fascinating exchange:

“They are,” said Frodo. “Do you like them still, now you have had a closer view?”

“They seem a bit above my likes and dislikes, so to speak,” answered Sam slowly. “It don’t seem to matter what I think about them. They are quite different from what I expected – so old and young, and so gay and sad, as it were.”

Leave it to good old Samwise to stumble into a bit of unexpected, but profound wisdom! He’s recognized something crucial about the elves: they are wholly other than he is. If he is to fully experience and appreciate all they have to offer, he must accept that as his starting point; it must form the foundation for all his interactions with them.

Let me suggest that we would be better off taking a similar approach to classic literature. When we pick up a Shakespeare play or Homeric poem, we are picking up something that is wholly other than we are. I’ve said before that reading literature is a form of time travel. When we read it we’re encountering thoughts from an entirely different culture, with an entirely different perspective on the world. Just as it would be foolish for Sam to approach the elves the way he approaches his fellow hobbits, it’s foolish for us to approach any work of classic literature the way we approach a book or movie made in recent years.

First, we need to approach classics as students and not as critics. Thanks to the internet and social media, we’ve been taught to approach everything as amateur critics. The second you finish a book on the Kindle you’re invited to assign it a 1-5 star rating. Goodreads wants you to write reviews of every book you read.

Don’t get me wrong, I think these tools can be a great way to interact with others about classic literature. Unfortunately, they also breed in us an attitude of sitting in judgment on every word we read. The reality is that most of us have neither the talent nor training to critique the likes of Shakespeare and Dickens. Does that mean you can’t have personal preferences? Of course not. I’m always going to enjoy John Milton more than I do Charlotte Bronte. But it does mean that when I read Bronte I’m not sitting in judgment of her.

Just as Sam recognized the elves as above his likes and dislikes, we ought to to recognize that the classics are above ours. For as much as it goes against the flow of modern culture, if we’re going to read great literature we need to set aside our desire to critique and become students instead.

Second, we need to remember why we read great books. When you enter the theater for the latest Marvel movie, odds are your goal is to be entertained. That’s perfectly fine. When you sit down to read classic literature, your primary goal is not to be amused but to become more human.

As I said in the previous article in this series, reading great literature is like injecting yourself with raw humanity. Few things will grow you as a person and a member of the human race than reading great books. Does that mean reading them can’t be fun? Of course not, but it’s a different sort of fun. To understand what that means, let’s go on to my final point.

Third, we need to accept the process of developing good taste. Most of us require a honing of our aesthetic sensibilities in many, many areas. While that might rankle modern sensibilities, we shouldn’t let it. It doesn’t mean there’s anything wrong with you. It’s simply part of what it means to be a growing human being.

Without the evolution of taste we’re bound to forever reject a fine meal at a steakhouse in favor of McDonalds. We’re destined to turn off Mozart in annoyance and turn on Justin Bieber instead. Similarly, without developing our literary tastes we’ll find ourselves mesmerized by Michael Bay and disgusted with Moby Dick.

Honing our tastes isn’t about becoming a snob or looking down on those who don’t like what we do. On the contrary, it’s an act of humility in which we submit to the process of becoming more fully human. As you do so, you’ll find that reading great literature not only becomes fun, it becomes a source of incredible joy.

Those three steps can take us a long way toward gaining the attitude of Sam in that scene from The Lord of the Rings. They can open up horizons of literature and ideas we’ve never before encountered.

Still, one major obstacle remains: what do we do when we encounter a book that seems absolutely impenetrable? It’s a significant problem for many readers, and one we’ll spend time examining in the third and final article in this brief series.