This is the first in a three part series from Ben on literature and literary appreciation. Look for the next two articles later this month

Seven years ago last month, Amazon launched their first generation Kindle, and in doing so brought e-readers into the mainstream. Since then, millions upon millions of such devices have been sold and numerous e-reader apps have been downloaded onto countless tablets and smart phones. E-reading has become a major force in the literary world, and there are more than a few people who wish this was not the case.

It’s no secret that e-reading is controversial among certain book fans. You’ve probably heard – and perhaps made – several of the common arguments. E-readers threaten to rob future generations of the experience of going to the bookstore or library. They simply don’t compare with holding the actual book in your hand. In recent months, an article has made its way across social media arguing for ink and paper books by way of science. (While I don’t have the knowledge to dispute the study, I do find it odd that it seems to dump all e-readers into one category. There’s a significant difference between reading on an iPad vs. using something like Amazon’s Paperwhite technology).

As a voracious reader myself – and someone who has fine memories of countless trips to the bookstore growing up – it probably wouldn’t surprise anyone if I took up the cause of these dissenting voices. And yet, that’s not the position to which I find myself holding. On the contrary, I think the people mounting those arguments are seriously off the mark. 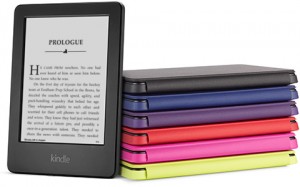 Don’t get me wrong, I understand and appreciate the romance of the paper and ink book. I’m currently reading The Lord of the Rings to my daughter using the hardback, Alan Lee illustrated editions. I wouldn’t have it any other way. Were the Book of the Gospels to be replaced with the iPad of the Gospels at Mass, it would be a tragic day for the aesthetics and theology of the Catholic Church. I don’t want to see paper and ink disappear.

I would argue that there are more factors in this discussion than the romance of the physical book. Whatever e-readers are lacking in romance, they make up for in one crucial way: They make literature accessible in a way it has never been before, and in doing so they just might save the world.

Take a look at the items on this list. There, you have listed 379 of the most important books ever written. Yet, when the average person scans that list, the first thing they’d probably experience is a series of bad flashbacks to High School English class where they were forced to read hard to understand literature in books with microscopic print and numerous obscure words peppered throughout a labyrinthine grammatical style.

It’s understandable why most people don’t read many, if any, of the great books once they’re done with school. Even if they remain readers, the choice between the latest bestseller and another bout with Hamlet is a no brainer for most people.
Yet, hidden beneath that unpleasant high school experience, is the greatest literature in the world. It is a collection of the beliefs, thoughts and dreams of millennia. The essence of humanity is laid bare in our great books. Reading them is a form of time travel. It connects us to our cultural ancestors in the most intimate of ways. It allows us to see and experience the raw emotions and convictions of their humanity and in so doing better understand our own humanity. When Lear holds Cordelia dead in his arms and laments that she is “Never, never, never, never, never,” it gives voice to emotions of the sort we experience in the face of death or other great loss.

We need that desperately. I believe we have an increasingly shallow culture. Our world is safe and accessible, and while much good can come of that, it is also eroding us as a people. We’re not so much in danger of losing our humanity as we are of it becoming atrophied.

Literature is the solution to that problem. When we read it, it’s like injecting ourselves with raw humanity. It takes us beyond our comfortable confines and into the deepest reaches of the human person. That’s not to say you shouldn’t read just for fun. It’s only to make the argument that whatever else you read and why-ever else you read it, you need to be reading the great books.

As soon as we come to that conclusion, however, we return to the problem of the “high school English experience.” While literature ought to be vibrant and life-giving, many people have only experienced it as dry and suffocating.

That’s where e-readers come in.

I listed above a few of the problems people encounter when trying to read literature. Let’s take them one at a time starting with text size. The size of print in a book might seem like a negligible thing, but it’s not. If you crack open Brothers Karamazov and have to squint to make out the first line, it’s at the very least a psychological barrier. If you have a reading disability like dyslexia, that barrier could be more than just psychological. Studies suggest that for people with dyslexia, text size can make a significant difference in their ability to read.

For many people, text size could be the deciding factor on whether or not they will (or even can) continue on past those first few paragraphs. E-readers solve that problem, allowing you to adjust the text to your comfort level. Its a small change that makes countless books accessible that wouldn’t be if we only had paper and ink publishing.

Next, we have grammar and vocabulary. Footnotes and endnotes used to be a significant problem for e-readers, requiring you to navigate to the end of a chapter or even the entire book to read the note and then somehow find your way back to where you were. It was too much effort. Modern e-readers have solved that. Notes now pop up in a window on the page you’re reading and don’t require any navigation on your part.

That’s crucial when reading someone like Shakespeare where the notes are often the difference between following his many turns of phrase or becoming hopelessly lost in the text.
Vocabulary is even easier. You can look up unknown words with a simple tap of your finger. As for unusual names or words that might be too obscure for the dictionary, the latest generations of the Kindle will also search Wikipedia.

All of that doesn’t even take into account the other resources technology gives readers. My daughter and I are currently memorizing a monologue from A Midsummer Night’s Dream. We use my iPad to look up pictures of the different characters and YouTube to hear how different performers handle the lines. Websites like Shmoop and Sparknotes are free online. Thanks to your smartphone or iPad, you don’t have to run to the computer to read them every time you get lost in a difficult section or forget who a character is.

Technology – especially e-reader technology – makes literature more accessible than it has ever been before at a time when we need it more than we ever have before. Of course, paper and ink books are wonderful. It would be tragic if we ever lost them. But that shouldn’t mean we shun new reading technology. On the contrary, we ought to spread the word that e-readers can help banish the memory of that stuffy English classroom. They can make literature come alive and introduce you to the greatest – and most human – books ever written. If we’re willing to use these tools to do that, we just might stop the erosion of ourselves and our culture, and maybe, just maybe, by doing that we’ll save the world.
Note: Sarah, our editor here at The Sci-Fi Christian, has written an article on how the school she works for is using e-readers to improve education. Take a look here

8 comments on “Your Kindle Can Save the World”