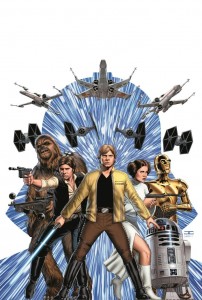 January 14, 2015 was certainly a day long anticipated as Star Wars in comic book form returned to Marvel, who held the franchise’s comic book license for nine years and 109 issues (1977-86). But will it also be a day long remembered?

The new series’ premiere issue hits the right notes. Its opening pages expertly evoke the experience of watching a Star Wars movie’s first few minutes: that beloved, blue-text-on-black “title card;” the bold, yellow, stylized logo; the in medias res opening crawl—all that’s missing is John Williams’ indelible score (which isn’t really missing because most readers are, I’m sure, mentally supplying it). Within minutes, we’re into a fast-paced fight between Stormtroopers and scrappy Rebels, as our heroes from Episode IV infiltrate and attempt to destroy an Imperial base. (The panel in which readers, together with an Imperial officer, stare down the barrel of Han Solo’s blaster is one of the issue’s best.) The action even culminates in a dramatic entrance from Darth Vader that not only recalls but also ramps up the dread he inspired when he first strode onto the screen in 1977.

Jason Aaron’s script never slows, in short order introducing subplots about Chewbacca’s attempt to assassinate Vader (spoiler alert: he fails), C3PO’s attempt to defend the Millennium Falcon from alien scavenger critters (spoiler alert: looks like he’s gonna fail, too), and Luke’s attempt to right a serious wrong that he uncovers in the base’s lower levels (I’ll let you read about that one for yourself). John Cassady’s art is strong and dynamic. Every so often the characters don’t quite look right—Princess Leia especially suffers in a few panels (she’s also flashing too much leg, Elsa-like, on the standard cover; it’s no metal bikini but, still, show Her Highness some respect!)—but his generally sure lines, brought to vivid life in Laura Martin’s colors, don’t offer readers many chances to escape the issue’s grip. The end, new and iconic all at once, comes too soon.

No doubt about it: this first chapter of “Skywalker Strikes” is classic Star Wars. It may be too classic, in fact. A great deal of its appeal rests in echoes and overt anticipations of the on-screen saga, a strategy that could backfire when that “First Issue!” thrill is gone. The thread focused on Luke could yield compelling material as the story progresses; on the whole, however, this Star Wars #1 feels a little more like junk food than did Dark Horse’s Star Wars #1 two years ago. (Of course, at the time I complained that Dark Horse’s #1 felt a little too substantial. There’s just no pleasing some people!)

I’ve no doubt Marvel’s new Star Wars will be professionally executed and, more often than not, extremely entertaining. But unless it can help lay a foundation for Episode VII and beyond of the whole saga, it will only be covering ground and filling in gaps that other licensed tie-ins and, more importantly, the fans themselves, have been covering and filling in for a long time.

Given Disney and Lucasfilm’s current commitment to holistic Star Wars storytelling, the series may well end up doing more than I expect. And, even if it doesn’t, if it can make me feel for a little while each month like the Star Wars-obsessed kid I was from 1977 to 1983, that’s nothing to shake a gaffi stick at. This new Star Wars book may not be long remembered, but I’ve no doubt it will be currently and widely enjoyed, and deservedly so. It captures the fun and fantasy of that Galaxy Far Far Away—and it even hints at something more, something that makes us remember why we became Star Wars fans in the first place. It’s right there in the first line of the issue’s opening crawl: “renewed hope.” 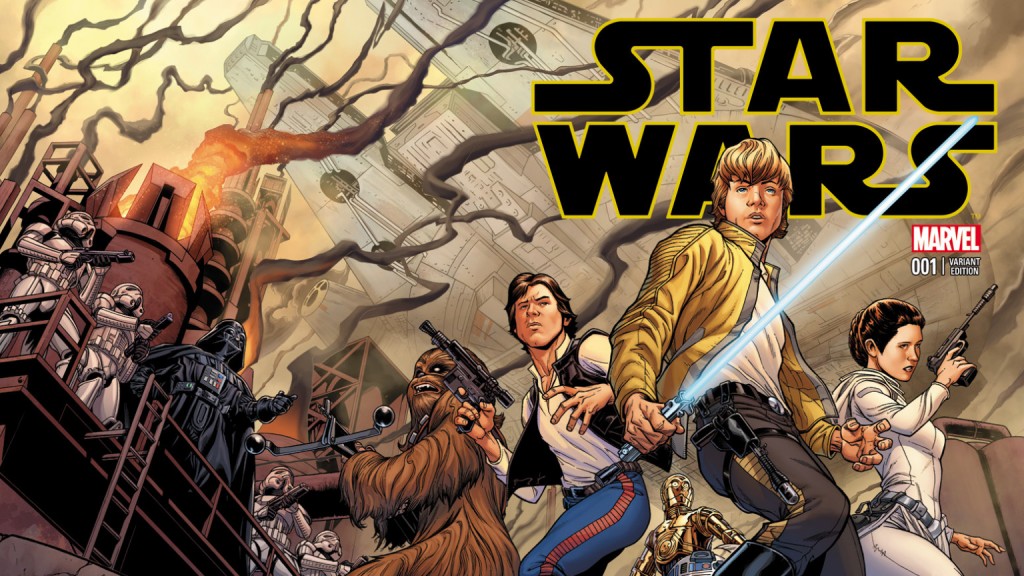