Note: This is the third articles in a series on literary appreciation. Click the links below to read the first and second articles
Your Kindle Can Save the World
Sam Gamgee and Literary Appreciation

“I really wanted to read Moby Dick,” a friend remarked to me a couple months back. “That is, until I actually started reading Moby Dick.”

His comment made me laugh out loud. It expresses a sentiment that anyone who has read, or attempted to read, Herman Melville’s magnum opus will understand instantly. While I love the book myself, I’ll be the first to admit that the tens of thousands of words that lie between “Call me Ishmael” and Captain Ahab’s eventual showdown with the White Whale can be a bit of a slog. In seemingly unending chapters, Melville gives more details on cetology – the study of whales – than anyone ever wanted to know. Even the chapters not devoted to that discipline can be tough going, including one that is famous (or perhaps infamous) for being nothing more than a discussion of how white the eponymous whale happens to be. 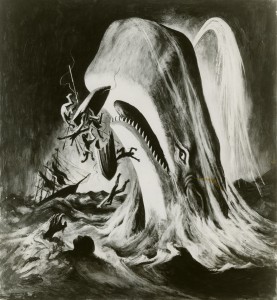 Yet for all that, Moby Dick is a masterpiece and has been rightly regarded as a classic for close to two centuries.There’s a reason why people turn up year after year for the New Bedford Whaling Museum’s marathon reading of the novel (a task which, in case you were curious, takes approximately 25 hours to complete). There’s a reason why the novel continues to inspire numerous media and pop culture references in works as diverse as The Simpsons, The X-Files, and Battlestar Galactica. For all its challenges, there’s something deeply true and beautiful in the novel. No amount of difficult cetology can stop its biblical language and themes of obsession and revenge from resonating.

The tension inherent to reading Moby Dick is indicative of a lot of classic literature. We know there’s great stuff there (or at least hope that’s the case), but when we attempt to find it, it seems our reach exceeds our grasp. Whether it be archaic language, confusing characterization, seemingly irrelevant detail, or a confusing plot, it often isn’t long before we stop looking for the buried treasure literature has to offer, and decide to turn on a Michael Bay movie instead. Sure, it might be stupid, but at least we don’t have to put up with cetology in order to get to the robots punching each other!

There’s no denying that these obstacles are real. The good news is, they’re not insurmountable. Running into trouble while reading classic literature is normal. It doesn’t mean you’re dumb or lacking some special education needed to read these books. Most of all, it certainly doesn’t mean you should give up. If you take nothing else away from this series of articles, take away this: you are more than capable of reading and enjoying classic literature. It might take some work, but it’s something you are absolutely able to do and do well.

Having that conviction is the first, and most important, step in overcoming obstacles in difficult literature, but let me offer a few other suggestions on what to do when you’re stuck.

First, let me reiterate the points in my previous two articles: use the tools available to you, and be willing to come to classic literature humbly. Sure, it’s possible to read tough books without the aids of the internet or an e-reader. People have been doing so for centuries. But why would you want to? To not use the tools available to you is to set yourself up for failure. Similarly, having the right attitude when approaching books is crucial to overcoming obstacles. If you read Moby Dick and assume the cetology chapters are dumb and irrelevant, you probably won’t get very far. On the other hand, if you take the book humbly and on its own terms, you’ve already done a lot to get past its tough parts.

Second, be okay with not “getting it.” Sometimes the light bulb just doesn’t come on. Maybe you’ve slogged through a chapter, or even an entire book, and gotten to the end to realize you have no clue what the author said or why he said it. It’s okay for that to happen. Indeed, it’s part of the learning process. Congratulate yourself on the fact that you made it through that tough part and move on.

The same thing applies if you didn’t make it. It’s okay to fail sometimes. That difficult book will be there for you later on when you’ve gotten more used to fighting through tough sections. Don’t get down on yourself, and above all don’t give up on literature.

Third, focus on what you did enjoy. The best literature is a combination of plot, characters, structure, theme, and language. Even if you strike out on several of those, I’d be willing to bet that in almost all cases you can find something in one of those categories to latch onto and enjoy. Maybe there’s a tough part of Shakespeare in which you aren’t following the plot, can’t remember who the characters are, or know what he’s trying to say. Yet, if you let yourself, you’ll be able to appreciate the beauty of his language – how it sounds and flows. Let that be your starting point to finding enjoyment and appreciation in the work.

Fourth, it’s alright to listen to other people’s thoughts on a work. Let’s say you just finished Brothers Karamazov. You enjoyed the plot, but the philosophical stuff went over your head. It’d be easy to feel dumb and resist reading about the book since you don’t want to be someone who doesn’t think for yourself. However, reading analyses of a book – either to compare your own thoughts and opinions or to help you form them in the first – isn’t a failure to think or a result of being dumb; it’s a choice to learn. Indeed, insisting on only thinking for yourself is a great way to miss the point of literature. No matter how smart you are, there are things other people will see in books that you won’t. Allowing others to help you understand a book or refine your thoughts about it is crucial to being a mature reader.

Finally, have fun. Don’t let the tough parts of a novel distract you from the joy that reading can and should be. You’re not going to understand everything or breeze smoothly through every scene of every novel. That’s okay. Just relax and enjoy yourself. Remembering the soak in the pleasure that comes from the hard work of cultivating a discipline is the key to becoming a great reader.

Let me close out this series by reiterating the central conviction that led me to write it: cultivating a love of literature is important and something worth doing. I said in the first article that reading great books is like injecting yourself with pure humanity; doing so makes you more human and a better member of the human race. I really believe that. Our world needs people who are more fully human. Preserving and spreading the love of literature isn’t a job to be left for those who spend their careers at Ivy League schools writing line-by-line commentaries of Homer in the original Greek. It’s something we should all participate in, and by doing so we can make our world and our culture a better place.