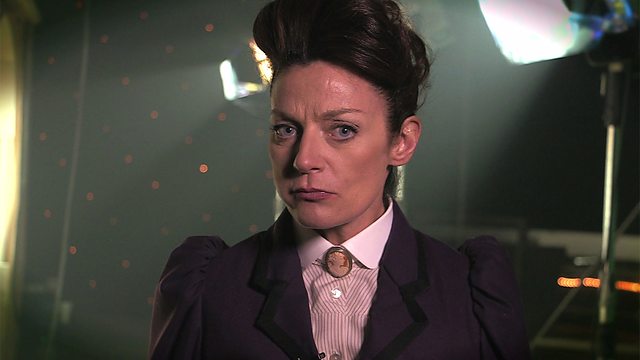 The BBC has confirmed, via a deliciously clever video, that Michelle Gomez will be returning to Doctor Who as the Master in series 9.

I doubt the BBC kept the Christian calendar in mind when planning this announcement, but how fitting that it follows hard on the heels of Ash Wednesday. Yesterday, thousands of Christians worldwide heard priests and pastors intone these words: “You are dust, and to dust you shall return” (Genesis 3.19). Many traditions interpret the statement as God’s imposition of mortality upon the human race as punishment for the first man and woman’s disobedience.

As she delivers her casual commentary on the story of the Fall—between bites of an apple, naturally, even though Genesis doesn’t specify the forbidden fruit—does the Master suggest she was present in Eden? “I can’t remember who ate the apple; was it Adam, or was it Eve?” Does she mean she simply can’t remember the story, or she can’t recall her firsthand experience of it? We did learn in “Death in Heaven” that The Master had been stealing dying minds for as long as humanity has believed in an afterlife. If God did not give our first parents judgment without also giving them hope (reading Genesis 3.15 as a messianic promise), might the Master have witnessed the Fall for herself?

In any case, she certainly remembers who the instigator was! “It’s the serpent who was a bit evil.” The Master may not recall that both Eve and Adam tasted the fruit—and so both bear responsibility (contra the attempt, in 1 Timothy 2.13-14, to pass the buck to Eve alone)—but she knows who bears the ultimate blame: “that ancient serpent, who is called the Devil and Satan, the deceiver of the whole world” (Revelation 12.9). Yes, we have sinned against God through our own grievous fault, but all we have done and all that we have left undone. The ultimate instigator, however, is that devilish dragon, and God has promised he will be judged accordingly.

Our Lenten contemplation of our mortality confronts us with the truth that, as the apostle Paul taught, “the many died through the one man’s trespass”—but the celebration of Easter toward which we move announces that “much more surely have the grace of God and the free gift in the grace of the one man, Jesus Christ, abounded for the many” (Romans 5.15).

Easter’s just over a month away. Alas, series 9 of Doctor Who isn’t due until late August at the earliest!

Are you looking forward to Michelle Gomez’ return as the Master?