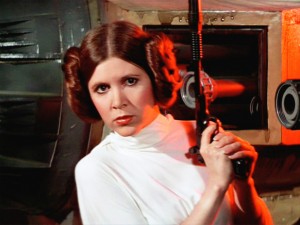 At dinner a few nights ago, my seven-year-old daughter stopped singing “Let It Go” long enough to ask, “Dad, who’s your favorite Disney princess?” She didn’t think I’d have an answer. But I did. “Princess Leia,” I said. And I meant it!

Brave, smart, beautiful, and a mean shot with a blaster, Leia is everything anyone could want a heroine to be. The fact that, prior to the prequels, the Star Wars galaxy really only had one woman in it (no disrespect to Aunt Beru or Mon Mothma) still strikes me as ridiculous. But if your galaxy only gets one woman, you could do no better than to get a woman like Leia.

Princess Leia is the ’eshet hayil of that Galaxy Far, Far Away. Those Hebrew words refer to the woman described in Proverbs 31.10-31. While the phrase is frequently translated along the lines of “a capable wife,” it can also legitimately be rendered as “woman of strength” or “valor” or “worth.” “‘Worth,” writes Carole R. Fontaine, “is a term more often applied to men” in Hebrew Scripture, “as in the phrase usually translated ‘mighty man,’ and denotes persons at the height of their powers and capabilities” (Women’s Bible Commentary, Westminster John Knox Press, 1998, p. 160).

If Leia’s not at the height of her powers and capabilities, I don’t know who is. During my most recent re-watch of the original movie, when I saw her order Han “Flyboy” Solo into that garbage chute as she kept a squad of stormtroopers at bay, I found myself saying, out loud, “She is so cool!” It was as though I hadn’t known this character for the last 37 years—as though I were discovering, for the first time, in Han’s words, “She’s got spirit.” 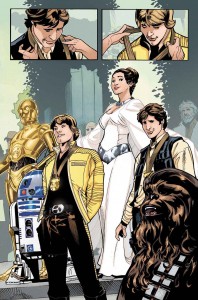 Now she’s also got her own comic book, with script by the venerable Mark Waid, pencils by Terry Dodson, and inks by Rachel Dodson. The miniseries’ first issue literally begins where A New Hope ends, as the majestic strains of John Williams’ “Throne Room” music are dying away (in my ears, at least—no indication the characters on the page are humming along). After the medal ceremony is over, however, new conflict begins. Frustrated that the Rebel Alliance’s military leaders are reluctant to give her an active role in the next stage of the battle against the Empire, Leia resolves to find the rest of her fellow survivors from Alderaan before the Imperials do. Her allies in this quest are R2-D2 and Evaan, an Alderaanian pilot who was mentored by the late Queen Breha Organa and who is critical of Leia for Leia’s supposed failure to grieve the loss of her people and her planet’s heritage. This first issue ends as Leia, Evaan, and Artoo take their unauthorized leave from the Rebel base on Yavin, dramatically evading Luke and Wedge and setting their course for Naboo. (Might we see our first Original Trilogy-era Gungans? Be still, meesa beatin’ heart…)

Evaan is an interesting new character. We saw no female pilots onscreen during the Original Trilogy, but it makes sense there would be some, and I appreciate Waid’s attempt to diversify the Rebels’ ranks. (I also spotted a black pilot and an Asian technician—tokens, yes, but better than no Rebel faces of color at all.) Evaan describes herself as “a confirmed royalist… and proud of it.” She resists Leia’s attempts to engage her as an equal not simply because she doesn’t personally care for the princess, but because Evaan sees herself as fighting to preserve the Alderaanian culture in which Queen Organa instructed her.

When, after Evaan has enabled their great escape on the last page, Leia hugs her and asks if they can “cut away all the nonsense and be friends,” Evaan is resolute: “No, ma’am.” Thelma and Louise, this ain’t. Apart from Lando’s brief dalliance with Darth Vader in Episode V, Evaan is the only Rebel character I know of who isn’t a pal to our heroes by default. (No doubt the EU has presented some in the past—EU vets, let me know.) She has been formed by different experiences and acts for her own reasons.

Unfortunately, she’s far more interesting than Leia is in this book. I’d be more tolerant of the fact that the Dodsons’ Leia looks so little like Carrie Fisher (with the exception of her holographic “Empire’s Most Wanted” poster) if she sounded more like her. But she doesn’t. The panel I quoted above—her “BFF forever?” moment with Evaan—is only one of several that seem forced and ring false. I also don’t believe Leia would let either General Dodonna or Admiral Ackbar talk to her as dismissively as they do, let alone that she would spend even one second pouting about it (page 9). If anything, it’s clear from Episode IV that the Rebels defer to her. She provided the stolen plans; she insisted, “We don’t have time for our sorrows.” Waid gets Leia’s status in the Alliance all wrong, and thus gets this miniseries off to a rocky start. 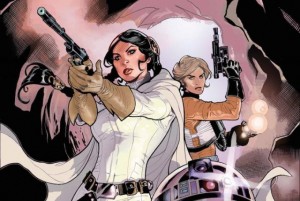 On the other hand, I applaud him for exploring the ramifications of Leia’s status as royalty—again, as far as I know, something seldom if ever done before. In her holographic message to Dodonna (one of the issue’s truly clever moments—an homage to A New Hope, but with a twist), she calls herself “the last member of the House of Organa.” Watching her learn how to bear that identity could prove engrossing, if handled with the same attention that Evaan’s sense of self receives. And, although her mission in this miniseries is arguably a stereotypically feminine one (as opposed, say, to the search-and-recon/active military duty she undertook at the beginning of Brian Wood’s Dark Horse Star Wars run), it’s also one that should resonate with sci-fi Christians. Leia’s resolve “to gather and protect every last surviving son and daughter of Alderaan” evokes the Good Shepherd’s resolve to go into the wilderness in pursuit of the sheep who strayed (Luke 15.3-6), even at the risk of his own life (John 10.15). Clearly (spoiler alert), we know Leia will survive this mission; in-story, however, neither she nor General Dodonna share that assurance. She is willing to lay down her life for her people.

Princess Leia doesn’t fully do justice to its starring player, but it tells an entertaining story and, through Evaan, promises to expand my sense of those “millions of voices who cried out in terror” when the Empire struck in A New Hope. For those reasons, I’m sticking with the book, hoping I’ll see this Leia grow to more closely resemble the ’eshet hayil I’ve admired for so long.