Two major announcements from DC Comics and Marvel enter the arena. Only one will leave!

Well, maybe both can stay. It does seem dueling news stories from comics’ Big Two seem to be the new normal. Today, both the House of Ideas and its Distinguished Competition trumpeted big changes.

DC revealed that, starting this June, “The New 52” is coming to an end. Not the continuity itself, mind you, nor necessarily most of its characters, but the label. Given that the revamped status quo debuted in 2011, it’s probably about time it loses the “new” label. But the shift is more than semantic. According to DC Entertainment co-publisher Dan DiDio, it “will allow us to publish something for everyone, be more expansive and modern in our approach and tell stories that better reflect the society around us.”

At The Mary Sue, Jill Pantozzi points to the recently refreshed Batgirl monthly—in which Barbara Gordon fights crime while living and working with a hip and diverse cadre of Gotham’s young adults—as an exemplar of DC’s new direction. Pantozzi says Batgirl “may not be the book for the tried-and-true DC collectors, [but] it is the book for a whole other segment of society previously ignored by the publisher. A segment that is without a doubt very much needed”—namely, new readers.

Many of DC’s old reliable titles will still be in place—Action and Detective Comics, Batman and Superman (and, for that matter, Batman/Superman), Green Lantern, The Flash, Justice League, Wonder Woman—as well as some of its newer hits, like Gotham Academy. But readers can also look forward to new solo series for Black Canary, Starfire, Cyborg, among others; and limited-run books for villains Bat-Mite and Bizarro. Even Prez is making a comeback (just in time for the 2016 election cycle). The Mary Sue shows off the entire impending DC catalog here, with some fantastic art samples.

Not to be outdone, Marvel also captured attention today with its announcement of an all-female Avengers team. Spinning out of this summer’s “Secret Wars” shakeup, A-Force will include such heroines as Black Widow, Wasp, Captain Marvel, Spider-Woman, Phoenix (Jean Grey), She-Hulk, Dazzler, Rogue and Scarlet Witch, as well as at least one new character, a sentient pocket universe (!) appropriately named Singularity. 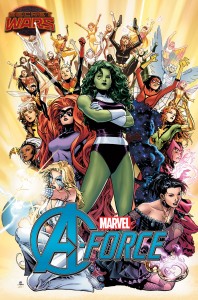 Co-writer G. Willow Wilson explains, “We’ve purposefully assembled a team composed of very different characters—from disparate parts of the Marvel U, with very different power sets, identities and ideologies. They’ll all have to come together to answer some big questions: What would you sacrifice to succeed? What is being a hero worth?”

Mashable’s Josh Dickey points out, “Though A-Force is its first all-female Avengers team, it’s not [Marvel’s] first team title to feature only women. In fact, it’s the fifteenth; the most recent was last year’s X-Men run… Marvel says its female fanbase has been exploding recently, and with the emergence of Captain Marvel, Ms. Marvel, Black Widow and more—it’s easy to see why.”

I’m not likely to let either of these developments influence my comic-buying too much, but I’m all in favor of DC and Marvel showcasing a wider range of heroes and heroines. As the United States becomes increasingly diverse, it stands to reason that comic book superhero stories, one of our major artistic contributions to world culture, should reflect that diversity. Sure, these changes are motivated by money—these publishers aren’t non-profits, and are up against shrinking audiences for their books—but it’s not a bad thing for them to want to connect with society’s realities.

Your mileage may vary, but, in my experience, the church hasn’t always shown the same willingness to reach out to the neighbors it actually has, rather than the ones it used to have, or wishes it still had.

One of the challenges faced by the small, older, all-white congregation I served as pastor was learning to love the people in our demographically changing neighborhood. When I agreed to officiate at the wedding of a black couple, I was surprised at some of the concerns church members raised. A few weeks after the wedding, our church’s lawn sign was vandalized; some members were convinced it was a “hate crime,” retaliation for our having dared to welcome “those people” into our facility. (For the record, I’m not convinced anything more than teenage rough-housing was to blame.) I’m not claiming I’m any bold visionary. I struggle with change as much as anyone; like most people, I’m most comfortable around folk who are like me. But the resistance some people I respected and cared for showed to even considering what we, as a church, could do to include more and different people saddened me.

Sometimes I’ve heard Christians worry that embracing diversity means turning our back on fundamental Gospel truths. The thing is, diversity is already at the heart of our faith! We believe in one triune God—a loving community of three distinct and different but essentially united persons, Father, Son, and Holy Spirit. And this one-in-three, three-in-one God created us to live in united-but-diverse, diverse-but-united communities. “For in the one Spirit,” writes the apostle Paul, “we were all baptized into one body—Jews or Greeks, slaves or free—and we were all made to drink of one Spirit. Indeed, the body does not consist of one member but of many” (1 Corinthians 12:13-14). Paul’s talking about spiritual gifts, but I think his words also reveal God’s intention that the body of Christ reflect the united diversity in God’s own being.

Embracing diversity is an ongoing challenge for the church, as it is for our nation as a whole. It’s been an ongoing challenge for mainstream comics, too; don’t forget that DC launched The New 52, in part, to create “a more modern, diverse DC Universe”—but here we are. Until we are in God’s new heaven and earth, rejoicing before the throne with that “great multitude… from every nation, from all tribes and peoples and languages” (Revelation 7.9), let’s take what steps we can to live as the united, diverse community God created and calls us to be.

Scripture quotations are from the New Revised Standard Version. Positions stated in this essay are the author’s alone, and do not necessarily reflect those of other writers for The Sci-Fi Christian.

One comment on “Not One Member, But Many: Diversity in Superhero Comics and the Church (Comics News)”