As the more-machine-now-than-man himself once said, “Impressive. Most impressive.” 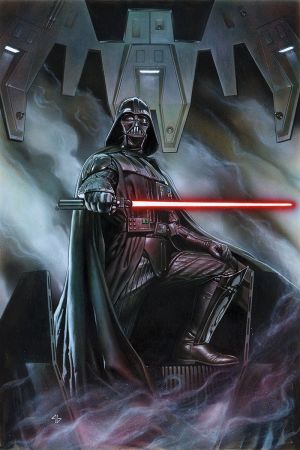 The first issue of Marvel’s Sith Lord-centric miniseries—written by veteran British comics scribe Kieron Gillen, drawn by X-Men stalwart Salvador Larroca, and colored by Edgar Delgado—is one outstanding book. If you worried (as I did) that this issue’s long-available preview pages went the way of many movie trailers and gave away all the best bits, have no fear. Darth Vader #1 is an elegantly crafted, smartly scripted, action- and intrigue-loaded delight from start to finish.

This issue doesn’t simply capture Vader, it breathes him. On every page, the Dark Lord “moves” like David Prowse (or, when wielding a lightsaber, Bob Anderson) and “sounds” like James Earl Jones. No gesture appears forced; no line of dialogue rings false; not even a single angle of his iconic black armor is out of place. Over in Marvel’s main Star Wars monthly, Vader is quite admirably written and drawn; here, however, he is perfectly realized.

What’s more, he displays a surprisingly wide range. In their words and pictures, Gillen and Larroca coax a compelling performance from the character. He is fierce and formidable in most sequences (the dude Force-chokes Jabba the Hutt!) but hesitant, wounded, even slightly sympathetic in some, as when the Emperor berates him for presiding over the destruction of the first Death Star (when Palpatine spitefully throws that old “Chosen One” prophecy in Vader’s face, you almost feel sorry for the apprentice formerly known as Anakin). When I finished reading, I sensed again all the fascination I’d felt toward Vader as a kid in 1977, stretched out on my bedroom floor to piece together his portrait on the backs of Topps trading cards. This Vader conveys all the menace he did in his heyday, subtly seasoned with his emotional legacy from the prequel trilogy.

I acknowledge that, as with the first two issues of Marvel’s new Star Wars proper, a large part of this issue’s appeal rests on its ability to replicate what we already know. The opening Tatooine sequence pays clever homage to Return of the Jedi perhaps too well, and the visual quotations of Episode IV are perhaps too easy.

But while Darth Vader #1 does share the main book’s “playing with your favorite action figures” vibe, it also introduces some new elements. We meet a new bounty hunter, for instance, a roughed-up, armor-wearing Wookiee I wouldn’t want tracking me down. And the Emperor’s unnamed, enigmatic, eye patch-sporting confidante is a secret neither Vader nor the readers can rest easy not knowing.

Darth Vader will not be a fully stand-alone miniseries. This issue recapitulates some moments from Star Wars’ first two issues. It does so, however, from Vader’s perspective, and thus gives the new Marvel line instant depth. This choice bodes well for the texture of the narrative world to come from Lucasfilm and Disney’s commitment to coordinated cross-platform storytelling. It bodes less well for budget-minded fans who want to follow the full story as it unfolds!

My quibbles with the issue are minor. I’m not sure why Jabba’s infamous trap door appears to ripple beneath Vader’s feet—is it wet concrete, freshly applied after some unknown unfortunate’s recent descent to the Rancor? And I assume the final scene is connected to a pivotal moment in Attack of the Clones, but what has transpired isn’t made explicit.

Ultimately, however, Darth Vader #1 is a superb start. As it follows Vader’s quest to work himself back into the Emperor’s good graces, it may also prove to be a parable of the futility of trusting in mortal leaders and grasping for worldly power. Palpatine warns Vader that Vader must not fail him; Vader, in turn, issues the same warning to the bounty hunters he enlists at the issue’s close. It’s a keen psychological, even spiritual, insight: Those who seek mastery through fear only reveal that fear has already mastered them. Sci-fi Christians know, of course, that perfect love casts out fear (1 John 4.18)—but we also know Vader will not experience such love again until his son refuses to give up on him in the Emperor’s throne room, high above Endor.

Until then, we will watch the fearful, fear-driven “Lord” Vader descend ever deeper into the Dark Side. With Gillen, Larroca, and Delgado to guide us, we should be assured of a fascinating and fun journey.