It’s the episode that established the goatee as the tell-tale facial hair of evil doppelgangers everywhere! 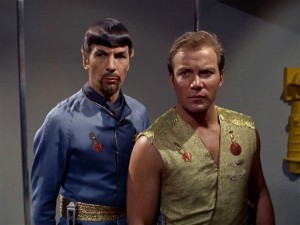 An ion storm causes the transporter to swap Kirk and the rest of his landing party with their sinister “doubles” from an evil and opposite universe. The ISS (Imperial Star Ship) Enterprise is a paranoia-filled pirate vessel where crew members watch their backs because, at any moment, some scheming subordinate’s knife might end up there. The superficial changes—the “impaled Earth” logo of the Terran Empire emblazoned on the walls, the garish sashes that adorn the uniforms, the wicked scar running down Sulu’s face—reflect a reality where life is cheap, and brute strength and terror carry the day. Kirk must find a way to survive this morally inverted Enterprise long enough to not only find a way back home but also spare the peaceful planet Halka, which his Imperial counterpart has been ordered to annihilate

This episode marks one of the few occasions Leonard Nimoy played any character other than Spock in Star Trek (two others that come to mind are “Return to Tomorrow” and “Is There In Truth No Beauty?”). But Mirror Spock, as Kirk realizes, isn’t that different from “our” Spock, beard notwithstanding. He’s more menacing and authoritarian (“Your agonizer, Mr. Kyle…”), but he’s still logical and, as Kirk tells him, “a man integrity in both universes.”

Kirk appeals to that integrity in this scene, as he and the crew are about to beam back to their own reality.

Yes, a few of those… dramatic pauses… for which Shatner is famous punctuate Kirk’s plea for Mirror Spock to take action against the Empire. I find the moral urgency with which Shatner invests the speech, however, very appealing. Shatner is showing us Kirk’s capacity to be a prophet—not one who predicts the future (although, as even Mirror Spock acknowledges, the Empire’s eventual doom is written on its blood-stained walls), but one who, as did the biblical prophets, reads “the signs of the time” and calls for actions of righteousness and justice in response.

For his part, Nimoy makes small but crucial choices that allow the audience to see the wheels turning inside Mirror Spock’s head: the unwavering gaze with which he fixes Kirk, the upward twitch of that right eyebrow when he learns of the Tantalus Field, the secret weapon that has allowed his Captain Kirk to remain in power. When he declares, “It is time,” Nimoy’s inflection hints that Mirror Spock means he has, in fact, decided it is time to take action for freedom; his promise to consider such action carries a ring of already accomplished success.

Later Trek, including the Deep Space Nine episode “Crossover”and David Mack’s novel The Sorrows of Empire, would reveal that the Mirror Universe’s history doesn’t exactly proceed according to Kirk’s expectations. Taken by itself, however, this episode anticipates an ultimate bending of that other dimension’s moral arc toward justice, and both Nimoy and Shatner play this climactic scene accordingly, and memorably.