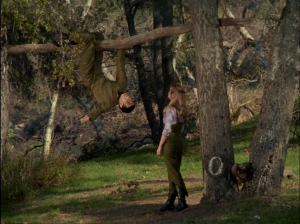 In “This Side of Paradise,” scripted by the incomparable D.C. Fontana, alien spores infect the crew, enticing them to abandon their posts for an idyllic but stagnant life on a failed Earth colony. Not even Spock proves immune. The spores shower down on him, and he’s happily swinging from tree branches and making up for lost time with old flame Leila Kalomi.

When Kirk discovers that strong, violent emotions break the spores’ hold, he plans to provoke anger in Spock so that he can regain his first officer as an ally in regaining his crew. Does he ever succeed!

High-def is unforgiving where stunt doubles in the original Star Trek’s fight scenes are concerned. What holds up beautifully, however, is the caliber of acting Shatner and Nimoy bring as they build up to this particular tussle.

Shatner delivers his stinging words with relish:  “You’re a traitor from a race of traitors. Disloyal to the core, rotten”—note how he hits that initial “r”—“like the rest of your subhuman race”—and then the briefest of pauses, for Kirk’s not done yet—“and you’ve got the gall”—watch him widen his eyes for emphasis—“to make love to that girl.” This being 1960s primetime television, I assume the phrase “make love” is being used broadly—to court, to woo—but the way Shatner says it suggests Kirk intends it in its carnal sense.

As the old saying goes, acting is about reacting, and all of Nimoy’s reactions are perfect. His chuckle and head-shake at Kirk’s “hyperactive thyroid” remark… The warning glare he shoots from lowered eyelids when Kirk mentions Leila… His almost blank stare as Kirk’s mockery hits its peak, an impassiveness that makes his abrupt outburst of physical violence all the more impressive: All of it shows Nimoy in complete command of his character.

Kirk is lucky Spock catches himself as soon as we’re back from commercial! Kirk will claim he “didn’t realize what it took to get under that thick hide” of Spock’s; apparently, he hadn’t counted on having to cross as many lines as he did. It’s a lesson in the power of language. Our words can be forces for good or ill—or, as in these strange circumstances, for both at the same time! “How great a forest is set ablaze by a small fire!” the apostle James marvels (James 3.5b, NRSV). Having seen how his tongue lit a fire of rage in Mr. Spock, James Kirk would no doubt add his “amen.”

The moment’s a classic, not only for its inherent drama, but also for the way it ultimately reinforces Kirk and Spock’s friendship. Can there be any doubt that, in Star Trek (2009), Nimoy’s “Spock Prime” was remembering this row when he urged Chris Pine’s Kirk get a comparable rise out of Zachary Quinto’s “emotionally compromised” Spock? Any friendship that can survive a moment this painful—“in more ways than one,” as Kirk later says—is strong indeed.