Next year, Batman v Superman: Dawn of Justice will pit DC Comics’ two biggest superheroes against each other. For now, the teaser trailer released last Friday (in an anticlimactic unveiling of an event already eclipsed by the new trailer for Star Wars: The Force Awakens) is pitting me against myself.

I don’t like the title. It’s as awkward as the late Richard Pryor’s performance in Superman III. And reducing it to an acronym doesn’t help: BvS:DoJ looks like a Klingon curse word. Still, I can’t fault the title for dishonesty. This film will be, for better or worse, a Batman movie, so the Dark Knight gets top billing. It will also at least plant several seeds for a cinematic Justice League franchise—hence the subtitle. Superman is being squeezed out of his own sequel.

I do like the questions the trailer raises. Granted, the inclusion of such current commentators as Charlie Rose and Neil deGrasse Tyson will make this movie DOA—dated on arrival (apparently the filmmakers didn’t learn the lessons of Contact). But the questions they’re asking interest me. They’re the kind of questions we deal with here at The Sci-Fi Christian on a regular basis. Yes, superheroes would prove controversial in the real world. Yes, superheroes would cause us to question some of our most cherished beliefs. No previous Superman movie has really wrestled with these questions before. Now, I suspect BvS:DoJ won’t really “wrestle” with them, either—but it’s acknowledging them, and that’s something new. Maybe we’ll get a few intriguing thoughts as a result. 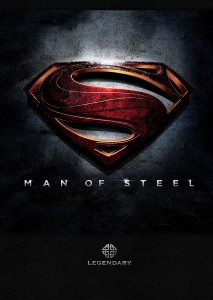 I suspect such questions will also allow the movie to address fallout from Man of Steel’s controversial third act. I know, I know: I sang that movie’s praises at some length in this forum two summers ago, and even offered a defense of the filmmakers’ decision to have Superman kill General Zod. I don’t exactly retract my opening night reaction, but I admit I’ve grown a lot more sympathetic to critics who point out, “It wasn’t a documentary!” Screenwriters David Goyer and Christopher Nolan and director Zack Snyder didn’t have to tell us a Superman story that climaxed in Superman resorting to killing his enemy (and Nolan initially resisted the idea). They also didn’t have to spin a yarn in which Superman was every bit as much a destructive force as the villain, surely killing innumerable innocent lives as he and Zod duked it out. No, Man of Steel’s creative team made choices that manipulated Superman into a morally ambiguous position at best. I don’t object to seeing Superman confronting ethical quandaries; and I grant that Man of Steel showed us a superhero who was having a really rotten “first day on the job.” But, in ending as it did, when it did, it asked us to accept that Superman as the Superman.

My hope is BvS:DoJ will somehow (amidst all the attention to Batman and the nascent Justice League) make clear that Man of Steel marked this Superman’s starting point, not his ending point. Judging from the crowd pressing in on him (what’s with those folks near the back who’ve painted their faces like skulls?) and the ridiculously huge statue built in his honor, a good deal of time has passed since Man of Steel. Superman has presumably been doing all sorts of super-good deeds in the interim (like stopping that missile at about 30 seconds in) to win some public support. Surely this film will show us some glimpses of a recognizably, unequivocally heroic Superman. 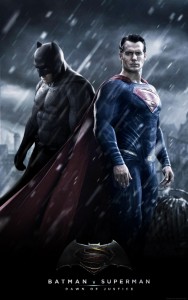 What I do appreciate about Batman’s presence in this “who would win in a fight” plot, however, is that Bruce Wayne’s suspicion of Superman (egged on, perhaps, by Lex Luthor?) looks like it will serve the important theological function of protesting idols. I don’t expect Superman will have claimed the title of “Savior” for himself in this film, but I have no problem believing that some people will have applied it to him. As one of the talking voices at the trailer’s beginning says, we human beings do have a terrible track record of following the wrong leaders. “Do not put not your trust in princes,” the psalm-singer warns us, “in mortals, in whom there is no help” (Psalm 146.3, NRSV). When we see false gods, we have a responsibility to call them out. Superman’s statue may not deserve to be vandalized, but plenty of idols do need to be labeled and rejected.

Not Trusting Good News to Be Good

In the end, though, I’m less than entirely enthusiastic about BvS:DoJ because it seems to miss the basic point of the superhero genre, at least as I see it. I think superhero stories should be about hope. They don’t have to look at the world through rose-colored lenses; they don’t have to always be “all-ages friendly,” or never offer anything controversial to think and talk about. But these super-powered characters are supposed to be better versions of ourselves. Their stories should, to borrow J.R.R. Tolkien’s term, be eucatastrophic—marked by an unlooked-for, unmerited grace that shatters our hopeless expectations of life. Superman’s not Jesus, and shouldn’t be treated as such; but he is a character who comes into our world bringing good news. We’re not alone. We have a powerful friend. And—as this classic panel from Grant Morrison and Frank Quitely’s All-Star Superman puts it—we’re stronger than we think we are.

One of the prayers of confession used in my denomination asks forgiveness because “we have not welcomed the light, or trusted good news to be good. We have closed our eyes to glory in our midst, expecting little, and hoping for less.” The story of the Gospel can cure us of that soul sickness. To a lesser extent, the best superhero stories can help, too.

Batman v Superman: Dawn of Justice may end up exciting me more than I think it will. It will be a technically accomplished film. It may hit some nice character beats, and hopefully it will serve up some wisdom and wit alongside the big-screen, blockbuster action. But because it begins from a place of not trusting good news to be good—of expecting little, and hoping for less—I think it’s setting itself an incredibly difficult task.

What are your reactions to the Batman v Superman: Dawn of Justice trailer?