With apologies to T.S. Eliot, April was not the cruelest month in terms of Marvel Comics’ Star Wars offerings. It wasn’t wholly kind, either. And let’s face it: No Star Wars comic book this month could hope to match the explosive impact of the new trailer for The Force Awakens. Still, the current comics version of the Galaxy Far, Far Away offered a lot to enjoy during the last four weeks.

Kanan: The Last Padawan #1 (April 1) – My initial reaction to Marvel’s Rebels-related series stands. If anything, repeated re-readings with my seven-year-old daughter—at her request—have confirmed it. Kanan promises to be a strong story, expertly told. Published as it was shortly after the first season finale of Star Wars Rebels, this initial issue has been a great way for us to share excitement for the Star Wars universe. We’ve enjoyed noticing details that escaped us in the first reading (“So that’s how Kanan got his holocron!” she said the third time through), speculating about exactly how our hero will survive Order 66, and even dipping our toes into the late, lamented (by some) Expanded Universe to learn about Depa Billaba’s past. Kudos to Kanan creative team Greg Weisman (writer) and Pepe Larraz (artist) for giving this geek dad a great way to help his daughter take her first steps into a larger world…

Darth Vader #4 (April 8) – Once again, the Dark Side of the Force delivered the month’s most marvelous Marvel Star Wars book. Well, writer Kieron Gillen and artist Salvador Larroca did, anyway. Their tale of Darth Vader’s quest for a secret army remains the most gripping of Marvel’s current Star Wars plotlines. 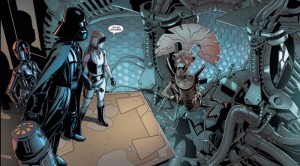 This issue takes Vader back to Geonosis, the world where (as an effectively bittersweet flashback panel reminds us) Anakin Skywalker and Padmé Amidala faced what they believed was certain death in a monster-filled arena in Attack of the Clones. Now, a very different planet awaits Vader: Certain death has descended on it. The Empire has bombed it, leaving it more bleak and barren than it was during the Clone Wars.

Doctor Aphra, the “rogue archaeologist” Vader recruited last month, is following a lead about a surviving Geonosian Queen who’s running an abandoned droid factory. Sure enough, the “homicidally broody alien queen” is using it as a “womb,” birthing horrific hybrids of winged Geonosians and Separatist battle droids. Vader takes the queen’s “children” for himself, reducing her nursery to nothing in a fiery conflagration.

The queen’s lament—“Has the Empire not taken enough from the Geonosians?… They’ve ruined our past… they can’t destroy our future!”—is remarkably poignant. The insectoid Geonosians established themselves as some of the Star Wars universe’s creepiest critters in Episode II and season 2 of The Clone Wars (“Legacy of Terror,” “Brain Invaders”—granted, those were zombie Geonosians, but still…). All the same, I felt a pang of sadness as the queen watched her only hope for her species literally go up in flames (vibrantly colored by Edgar Delgado).

BT-1, Aphra’s assassin astromech, packs a mean punch with his built-in flamethrowers. But it’s his counterpart Triple Zero—think “Mirror Universe C3PO”—who takes top honors for nastiness. As the Geonosian-droid hybrids burn, Triple Zero taunts them (in their own language, no less), “Hahaha! You are on fire and also dead.” That’s cold. And I had no trouble believing this protocol droid from hell could extract information about the Emperor’s secret plans for Vader from an ill-fated prisoner at issue’s end. We’ve seen that not all protocol droids in the Star Wars universe have Threepio’s prim and proper tones, but “listening” to Triple Zero’s lines in that way makes them all the more chilling: “Hello! I’m Triple Zero and I’m looking forward immensely to torturing you today.” Should Triple Zero appear in The Force Awakens or beyond, I nominate Daniels for double voice duty.

I’m still fascinated with Doctor Aphra. Others readers have dismissed her as “a female Indiana Jones.” I made that comparison myself last month. But she’s more. She’s a young person seeking her way, who doesn’t understand the full tragedy of the fact that Vader has crossed her path. Yes, she thinks Vader will kill her once she’s outlived her usefulness—and I fear she’s right—but the real shame is her inexplicable devotion to him. “You know you can trust me,” she tells Vader, “but you shouldn’t… You need to win, Lord Vader. This is for a higher cause.” Does Aphra really harbor some love for the Empire, or is she, for whatever reason, in love with Darth Vader? She’s physically strong, off-the-charts smart, resourceful and talented; Larroca’s art also highlights her exotic beauty (some panels remind me of Frank Quitely’s Lois Lane in All-Star Superman). By rights, she should have a bright future ahead. If she stays with Vader, she won’t—and she knows it, but stays anyway. It’s a disturbing dynamic, uncomfortably close to the plight of too many abused women in the real world, but it does make compelling reading. I hope someone will save Aphra—preferably Aphra herself—before it’s too late.

If your pull list has room for only one Marvel Star Wars comic, make Darth Vader the one.

Star Wars #4 (April 22) – This month’s installment of Marvel’s flagship Star Wars title reminds me of “Sweet Dreams” by The Eurythmics (said he, showing his age): Everybody’s looking for something.

Luke’s looking for redemption. He’s upset about his failure to defeat Darth Vader back in issue #2 and has convinced himself he’s more of a liability than an asset to the Rebel Alliance. I don’t quite buy that characterization—as Leia points out to him, he did blow up the Death Star—but if Luke’s still the just-out-of-adolescence farm boy who never made it to Tosche Station, okay. What I don’t buy at all is his decision to leave for soul-searching back on Tatooine. He was so eager to leave that planet behind him in A New Hope.

I suspect this plot turn happens only to set up another confrontation with Vader—who’s looking to secure Imperial supply lines on the Outer Rim, and so is also back home on the planet farthest from the galaxy’s bright center, visiting Jabba the Hutt, an idea handled far more deftly in Darth Vader #1. The delicious moment when Vader threatens the life of ever-annoying Salacious Crumb, however, almost makes all that time worth it. We also learn that Jabba has considered Ben Kenobi “a thorn in [his] side” for some time. Those are some untold tales I’d be eager to read! And I liked the biblical overtones of Jabba’s rhetorical question, “Who knew anyone of note was ever born on Tatooine?” A showdown between the galaxy’s greatest sinner and its future savior on the sands of their shared homeworld could be cool, if it didn’t feel so artificial.

Finally, a mysterious masked woman who vaguely evokes Episode II’s Zam Wessell but is not a bounty hunter (she says) and is a lot more menacing is looking for Han Solo. We don’t get nearly enough of her this time; maybe next month.

For now, writer Jason Aaron and artist John Cassaday are still mostly having fun playing with their action figures. The book includes appearances from not only Jabba and his retinue but also such familiar faces as Admiral Ackbar, Mon Mothma and Boba Fett. It’s hard to begrudge them their fun. Only two issues remain in the “Skywalker Strikes” arc, however; I hope they manage to secure a rousing start to Marvel’s new main Star Wars book.

Oh, I’m also still looking for those slaves Luke liberated in the first issue. Will we ever be treated to some stories of how their liberation from the Empire affects them? The Judeo-Christian tradition, with its emphasis on God’s saving and freeing activity, knows how much power can be discovered in the experience of captives released and oppressed people set free (Luke 4.18; cf. Isaiah 61.1). Why doesn’t Leia remind Luke about them? 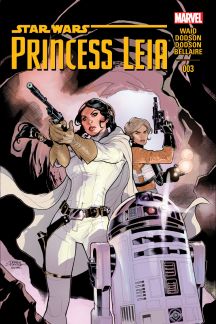 Princess Leia #3 (April 29) – If I were going to drop any of Marvel’s current Star Wars books, I’m afraid I’d drop this one. All the momentum Mark Waid and the Dodsons’ series gained in its second issue seems spent by its third. Even after several readings, I’m unsure what the Alderaanian survivors on planet Sullust are doing that so upsets Evaan. Leia’s pilot accuses them of “posing as preservers of Alderaan while [they] ravage what little of [Alderaanian] culture is left,” but all I see is an underground bureaucracy, led by a grouchy elderly woman, doing vaguely bureaucratic things (“You let him through without scanning him”). They bought some subterranean territory for themselves with smuggling money, apparently, but have they really “gone insane,” as Leia and Evaan’s Sullustian guide claims? I appreciate the story’s message that mere survival is not enough—a culture must preserve its values and its integrity, or else survival has no point—but all this is told to us, not shown, and the issue is consequently quite dull. Not even R2-D2’s roundup of dinosaur-like “Rockrenders” to save Leia and Evaan overcomes the book’s generally muddled tone.

I want to like Princess Leia, but this month’s issue left me cold. It seemed like padding; the best parts are the first and final few panels, which address the more pressing story of how the Empire is using inside information to track Leia and Evaan’s mission. Even in this aspect, however, the plot seems forced. If Commander Dreed really has enough intel to move against Her Highness, wouldn’t he go ahead and do it? He would not decide to keep following her simply to see where she’s going next. That’s just a sloppy story beat. Since this mini only has two issues to go, I’ll stick around and see how it ends, but I don’t anticipate it will stick with me long after the last page.

What did you think of this month in Marvel Star Wars?