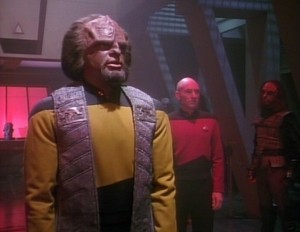 If you’re looking for Christ figures in Star Trek, Worf may not be the first character who comes to mind.

He’s certainly more violent than Jesus. Imagine the bloodbath if Worf had gone after those moneychangers in the Temple, wielding a bat’leth instead of a braided cord!

He doesn’t subscribe to Jesus’ “love your enemy” philosophy. In fact, in the TNG episode entitled “The Enemy,” Worf refuses to donate blood for transfusion to a critically injured Romulan even though that refusal means the Romulan’s death.

Klingons would rather kiss a tribble than turn the other cheek.

He doesn’t even seem to share Jesus’ enjoyment of life’s simple pleasures. We sometimes see him enjoying a goblet of blood wine or a glass of that other warriors’ drink, prune juice, but he’s not known for his ability to have fun. Jesus celebrated God’s good gifts so much he was labeled a glutton and a drunkard (Matthew 11.19); Worf couldn’t even cope with a surprise birthday party. As he once told Captain Picard, “I am not a merry man!”

But in the third season episode “Sins of the Father,” Worf, unlike Jesus though he generally is, commits himself to Christ-like action.

A Klingon of Sorrows, Acquainted with Grief

Star Trek viewers’ initiation into Klingon culture began 25 years ago last month with this episode. A few previous episodes—“Heart of Glory” in the first season; “A Matter of Honor” in the second—had hinted that the Federation’s former foes were more complicated and compelling than we’d given them credit for. (As late as 1984, no less a Trek-spert than David Gerrold wrote, “Klingons pick on old ladies. Klingons fart in air locks… And those are their good points.”) 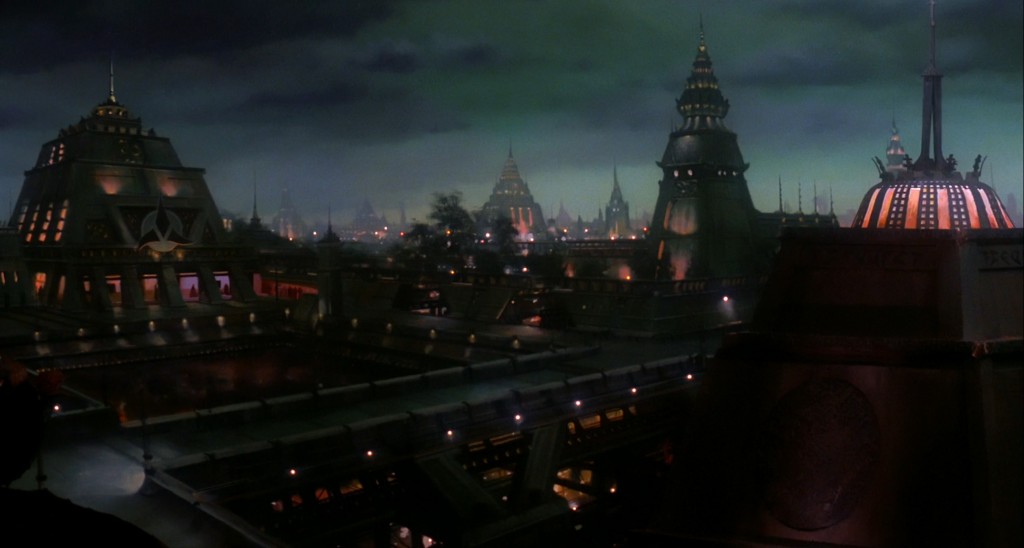 But with “Sins of the Father,” TNG launched an epic saga of political intrigue and personal honor that would span the rest of this series and spill over into Star Trek: Deep Space Nine. The story of Worf’s fall and rise in the Klingon Empire would reveal riches of Klingon history, ritual and worldview that elevated the species from “the Star Trek bad guys” to one of the most intriguing alien races televised science fiction had to offer. It all starts here.

Worf’s brother Kurn (played by Tony Todd) brings word that their dead father, Mogh, has been accused of betraying the Klingon colony on the planet Khitomer to the Romulans, years before. Worf returns to the Klingon homeworld and stands before its High Council to challenge the charges. He and Picard ultimately learn the accusation is false, a lie manufactured by the ambitious Duras (Patrick Massett) to hide the fact that his father was the traitor.

Someone had to be blamed [for the Khitomer massacre]… [Duras’] family is powerful. If the truth were known, it would shatter the Council, most certainly plunge us into civil war. You were in Starfleet. We did not expect you to challenge the judgment, nor did we know there was another son of Mogh… You will be condemned. So will your brother. There is no other way now.

Worf and his family have been made scapegoats. To spare the Empire and to preserve his generally unknown brother’s life and standing within it, Worf agrees to accept discommendation. He is exiled from Klingon society, branded a traitor. When Picard protests this injustice, K’mpec declares, “The Empire will not be destroyed for one family’s honor.”

It’s not hard for Christians to hear echoes of Caiaphas’ justification for seeking Jesus’ death: “[I]t is better for you to have one man die for the people than to have the whole nation destroyed” (John 11.50). Worf isn’t executed, but he “dies” to the Empire. He sacrifices his honor, his identity, to save his people from war. Jesus was executed—a sacrifice he, too, made willingly, to save his people from sin and death. Caiaphas didn’t realize how truly he spoke.

Like the Suffering Servant of whom Isaiah sang—the Servant long identified by Christians as Jesus—Worf suffers even though he is innocent. He is wounded for the Empire’s transgressions, and crushed for its iniquities; upon him falls the punishment that makes it whole (see Isaiah 53.4-5). Worf does not completely accept his ordeal “like a sheep that before its shearers is silent” (53.7). In K’mpec’s private chambers, Worf strikes Duras across the face and tells him, “You are the son of a traitor.” But publicly, Worf says not one word in his own defense. By a perversion of justice he is taken away (see 53.8).

Worf isn’t the only Christ figure in this episode. 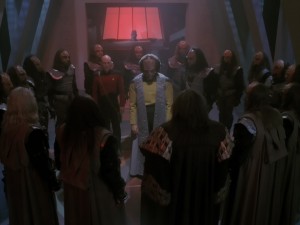 The High Council enacts its judgment as, one by one, its members turn their backs on Worf. Even Kurn, at Worf’s urging, performs this ritual. Like Jesus, Worf knows the pain of rejection by one’s kin. When all the Klingons have turned away, however, one person still stands by him: Jean-Luc Picard.

After thugs from Duras attack Kurn, Worf chooses Picard to serve as his cha’DIch—his advocate, or “second.” Throughout the episode, Picard makes it clear he regards this role as a high honor. When Worf objects to Picard going alone into a dangerous neighborhood in search of the truth, Picard simply reminds him, “Hey, I’m your cha’DIch.” And when Worf is an outcast, Picard—his cha’Dich, his captain, his friend—is still proud to claim him.

Had Joseph M. Scriven lived late enough to have been a Star Trek fan, maybe his famous hymn would have been titled, “What a cha’Dich We Have in Jesus!” Well, maybe not. But Jesus is the one person we can count on to stand beside and support us when all others turn their backs. Jesus “is not ashamed to call [us his] brothers and sisters” (Hebrews 2.11)—and, where Picard had no reason to be ashamed of guiltless Worf, Jesus would have reason to be ashamed of us, sinners that we are. But he was not, and he is not! He came among us as one of us (John 1.14), going alone into danger—“even death on a cross” (Philippians 2.8)—for us. He comes among us still in his Holy Spirit, “the Advocate” (John 14.26), the Paraclete—literally, “the one who comes alongside.” He promises to be with us always, “to the end of the age” (Matthew 28.10). He is our Teacher and Lord, but also calls us friends (see John 15.13-15). Even should our father and mother forsake us, the Lord will take us up (see Psalm 27.10).

Who has been a cha’DIch for you? Have you experienced Jesus as the one who stands beside you always?

2 comments on “TNG Theology: “Sins of the Father””