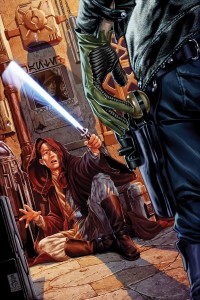 “Today’s the day!” she said as we settled in to read her bedtime story. “Today’s the day!” My seven-year-old daughter was more eager for Kanan: The Last Padawan #2 than Kabe was for juri juice in the Mos Eisley cantina. Proud moment in geek parenting: Your kid looking forward to New Comic Book Wednesday for the first time! Fortunately, writer Greg Weisman and artist Pepe Larraz didn’t let her, or me, down. Kanan #2 keeps the story of Caleb Dume, the future Kanan Jarrus, moving at a quick pace, without sacrificing solid characterization or sincere emotion.

The book doesn’t shield us from the horror of Order 66 as much as I thought it might. We see Depa Billaba and Caleb put up a bold but futile fight as clone troopers turn on them. We ache with Caleb as he kills two clones—two friends. We see blood spatter, including a blotch on Caleb’s face, as Master Billaba falls; we then watch clones blast her corpse, repeatedly, in the back. In one small but effective panel, the clones’ helmets are lit so that their helmets’ angular mouths resemble angrily bared teeth. The sequence is not gratuitously violent; my daughter paid close attention, but wasn’t scared or upset. Instead, these pages impressed upon both of us just how shocking and sad Order 66 was.

The issue’s midsection has a Les Miz feel to it. Caleb escapes to a city’s grimy underworld where, hungry and cold and drenched in rain, he ponders his uncertain future. (Some Star Wars filksinger could have a lot of fun rewriting “On My Own” with lyrics for the fugitive padawan.) A Kalleran from issue #1, pilot Janus Kasmir, finds him (his name is similar enough to “Kanan Jarrus,” I suspect it inspires Caleb’s Rebels-era moniker). Kasmir gives Caleb food, temporary use of a bunk aboard his ship, and some pragmatic advice: “To live in the actual galaxy with the rest of us miscreants, you lie, you cheat, you steal. You survive.” When Caleb receives the signal ordering all Jedi back to Coruscant, he takes Kasmir’s advice to heart, stealing the ship from him. Unfortunately, Caleb reaches Coruscant just as Obi-Wan Kenobi’s message warning Jedi to stay away reaches Caleb. ARC-170 Starfighters surround Caleb in the  cliffhanger ending.

The rapid tempo of Kanan #2 matches the speed with which our hero must grow up. Stark panels of Caleb in isolation dominate the artwork, increasing our sympathy for him. In several scenes, Larraz draws him as lost within his too-large Jedi robes—a fitting symbol of his situation. And the look of horror on his face as he watches Obi-Wan’s transmission is especially poignant. 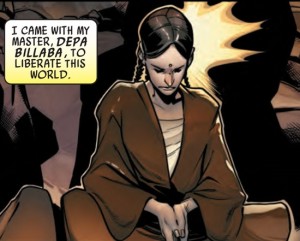 I’ll miss Depa Billaba. Sure, I knew she wouldn’t survive this month’s chapter, but her death is no less painful to watch. “She died to save me,” Caleb thinks. “I should do something…” His reaction could suggest Billaba’s death exercises some “moral influence” on Caleb, just as Jesus’ death, according to some theories of the Atonement, can inspire positive change in us. “For each of us he laid down his life,” wrote Clement of Rome, “the life which was worth the whole universe, and he requires in return that we should do the same for each other.” I think Christ’s Cross is about more than moral influence, but it’s not about less. As for Caleb, the novel A New Dawn and the first season of Rebels make me think Hera and Ezra exercise more influence on his decision to act as the Jedi he is, but even before he revealed his identity, he was secretly working for justice and striking blows for freedom as he could. Maybe Depa Billaba’s death was part of the reason why.

Both my daughter and I enjoyed Kanan #2. Now that we’re past the inevitable suffering of Order 66, we’re looking forward to whatever new adventure awaits the last padawan next month in issue #3.

What did you think of Kanan #2?

Cover art by Mark Brooks found at http://starwars.wikia.com/wiki/Star_Wars:_Kanan:_The_Last_Padawan_2. Image of Depa Billaba from a preview page posted by Marvel at http://www.starwars.com/news/kanan-the-last-padawan-2-exclusive-preview.