As I said in this forum not too long ago, Supergirl’s always been a lot more fun than her more famous cousin. Certainly, CBS’ upcoming Supergirl TV show (set to air Mondays this fall, 8 p.m. ET) looks like it will be a lot more fun than Batman v Superman: Dawn of Justice.

Watch the (wonderfully substantive) trailer released CBS’ upfront yesterday at Carnegie Hall and see for yourself:

I’ve been looking forward to Supergirl since the series was announced. Now, I’m even more eager for this autumn’s Monday nights to get here.

Here are some things I liked and thought about the trailer.

Melissa Benoist will be amazing in the dual role of Kara Zor-El (Supergirl) and Kara Danvers (mild-mannered personal assistant at a major metropolitan news organization). As the superhero, she projects nobility, idealism, and bravery in just the right amounts–enough to be convincing, not enough to feel “hokey.” In her secret identity, she evokes the late, great Christopher Reeve’s Clark Kent: nerdy but nice, socially awkward but not a social pariah. Watching Kara balance her public and private personas is going to be a blast.

The big news about Supergirl‘s Jimmy Olsen–sorry, James–isn’t that he’s black, but that he’s not a bow-tied perpetual adolescent. Mechad Brooks will be giving us not the cub photographer of Superman media projects past, but a competent, grown-up photojournalist who is apparently still friends with the Man of Steel but is too dignified to use a “zee-zee-zee” signal watch. In many comics, Jimmy’s been the one with a crush on Supergirl. In this show, it seems the attraction may first flow the other way–another nice twist on the mythos. Crack reporter that he seems to be, will James uncover Kara’s secret? 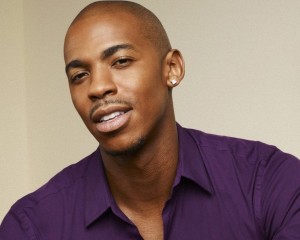 Chyler Leigh is playing a character new to the Supergirl story: Alexandra “Alex” Danvers, Kara’s foster sister. We don’t learn too much about her in the trailer, but I was intrigued by her line, “The world needs you to fly, and so do I.” Sounds like Alex may be, to some extent, the wind beneath Kara’s wings–which will make it all the more heartbreaking when, as many comics fans are already speculating, this “Lex” turns on Kara the way another Lex turned on a Kryptonian who was once his friend. (Hopefully Kara won’t cause her sister to go bald!) 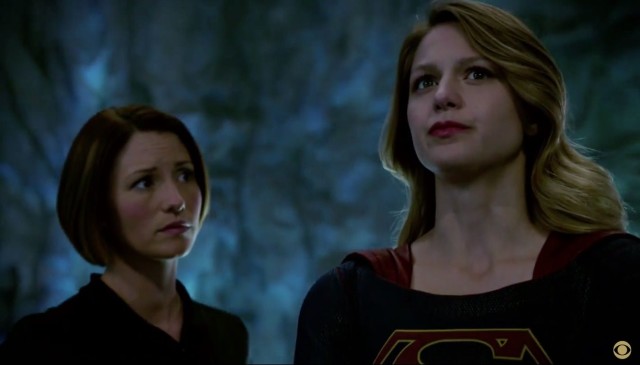 David Harewood plays Hank Henshaw. In the comics, that name belonged to an astronaut who eventually became the Cyborg Superman during the Death and Return of Superman storyline in 1992. On TV, Henshaw looks to be a military officer heading up the “Department of Extranormal Operations,” an agency which will no doubt introduce Supergirl to many “freaks of the week” and ongoing rogues. Given how executive producer Greg Berlanti has enjoyed playing around with names familiar to comic fans over on The Flash this season, I can’t imagine that Henshaw won’t go all Evil Cyborg Nemesis on Supergirl at some point; I just hope it won’t happen too soon. The relationship of trust he and Supergirl will be building–no doubt tentatively–in this series strikes me as one of its most interesting aspects. 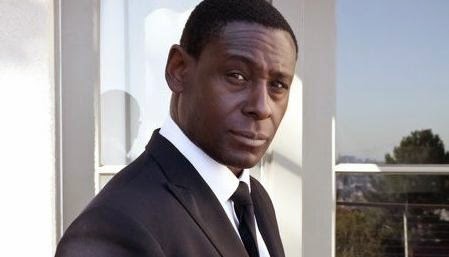 I like the origin of Supergirl’s name as a Twitter hashtag! Very fitting for the 21st century, and an innovative way to address potential criticisms of the name head-on: Not even our heroine really cares for it! Also, while I think grown women should be referred to as “women,” I think there’s some validity in Cat Grant’s rejection of “girl” as a necessarily diminishing name. It reminds me of the “Like a Girl” commercial that ran during this year’s Super Bowl. Clearly, Cat is a character who has not let the name “girl” erode her confidence and self-esteem. As played by Calista Flockhart, Cat reminds me of Meryl Streep’s character in The Devil Wears Prada, but with apparently a little more substance beneath all that style. 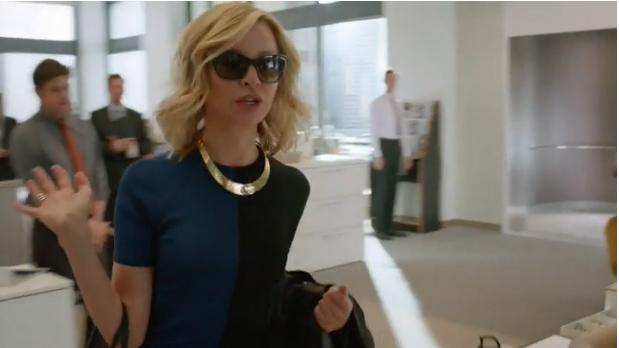 The costume is fantastic (although the argument about capes can’t help but seem derivative of Edna Mode’s “No capes!” edict in The Incredibles)–as is the rejection of any midriff-baring, hypersexualized super suit. Neither Michael Turner’s creepy “come hither” Supergirl nor the odd armored “swimsuit” Kara wore in The New 52 are anywhere in sight. We’ve returned to a clean and simple look, much like Helen Slater’s costume in the 1984 Supergirl movie. And it’s bright, as a costume that conveys hope should be (and apparently was, until Man of Steel‘s rendering team intentionally muddied it up). 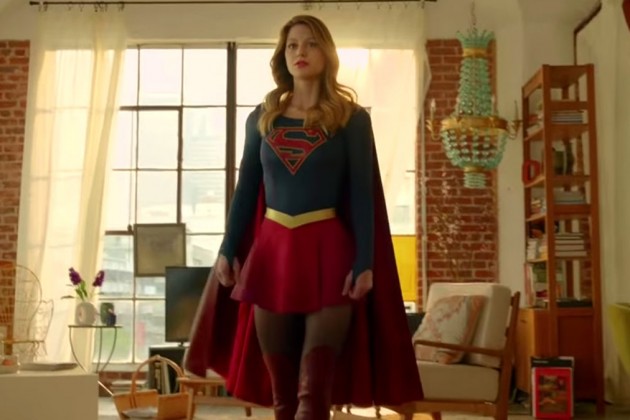 I think the show has a lot of promise. It seems like a major theme will be Kara’s struggle to define herself in the shadow (literally, at times) of Superman. I think that’s a theme lots of people can relate to, but especially young people. How do we acknowledge the importance of our family, our mentors, and our peers, while somehow blazing our own trail in the midst of all those influences? We’ve all negotiated Kara’s journey, with varying degrees of success–and we had to do it without superpowers! I’m looking forward to seeing how Kara fares.

What’s your take on the Supergirl trailer?

PS. If you’re looking for in-depth coverage of the upcoming Supergirl series, I suggest you check out Teresa Jusino and Rebecca Johnson‘s excellent podcast, Supergirl Radio. As of today, these women have produced 15 episodes–and the TV series doesn’t premiere until November! Teresa and Rebecca know their Supergirl stuff, and have entertaining and enlightening conversations. Highly recommended!