In the real world, Marty, Doc Brown and Jennifer were no-shows yesterday. But in the comic book world, characters from the Back to the Future films arrived right on schedule. IDW published the first issue of its four-part Back to the Future miniseries. (How wonderful that the flying DeLorean’s destination date happened to be a “new comics day” Wednesday!)

Plotted by franchise co-creator Bob Gale, scripted by John Barber and Erik Burnham, and drawn by a rotating team of artists (Brent Schoonover and Dan Schoening are the starters), IDW’s Back to the Future is an anthology entitled “Untold Tales and Alternate Timelines.” In each issue, two short stories will play in the backgrounds and around the edges of the movies, filling out readers’ sense of Hill Valley and its people throughout history. 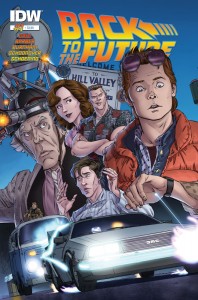 Issue #1 sets the tone by re-introducing the franchise’s two main players, but not quite as we’ve seen them before.

Neither Schoonover nor Schoening deliver slavish likenesses of Christopher Lloyd or Michael J. Fox. I thought Schoening’s slightly exaggerated style seemed the best fit for Back to the Future’s generally broad, comedic tone; but I do give Schoonover kudos for Doc’s elaborate Rube Goldberg trap, shown “in action” across most of page 11.

Both Barber and Burnham are writing characters, not caricatures. They keep callbacks to movie dialogue to a minimum, instead capturing the actors’ cadences and vocal mannerisms.

And, though set in different eras, both of Gale’s stories touch on the importance of being honest with oneself and with others—a nice nod to the simple lessons in moral decency found in the films.

I do wonder whether remaining issues will see Doc wrestling with ethical questions about the Manhattan Project, once he learns what he’s signed on for. I doubt it; that turn might prove too dark for a franchise about fast-paced, free-wheeling trips through time. Then again, the Biff-centric 1985 timeline of Back to the Future Part II is a pretty dark place; this property has the potential to explore substantive questions of right and wrong should the creators choose to. We’ll see.

This IDW miniseries is not the first time Back to the Future has moved from silver screen to comic page. If we’re fortunate, it won’t be the last time, either. If the first issue is a reliable indicator, we’ll be hearing some serious four-part harmony when the final issue hits the stands.

Have you read IDW’s Back to the Future #1? What did you think? Let’s talk in the comments!