In his introduction, Caseen Gaines sets the bar high for We Don’t Need Roads:

You may not believe Back to the Future is the most important film trilogy of all time, but after reading this book I bet you will.

Gaines wouldn’t have won that bet with me, but not for lack of trying.

We Don’t Need Roads is an entertaining and engrossing story of how so many major on- and off-screen Hollywood players in the 1980s solved a series of artistic and technical challenges that make plutonium-powered time travel look easy. While I’m not persuaded Back to the Future is “the most important film trilogy” ever (surely that accolade belongs to the original Star Wars trilogy for the forseeable future), Gaines has convinced me these movies deserve every bit of the attention and acclaim they receive.

I’ve always admired the Back to the Future series. I saw each one during its original theatrical run, and consider the first installment one of the most perfect movies ever made. (Frankly, Part II and Part III impress me less with each rewatch; they awkwardly introduce too many new elements—the sports almanac, Marty’s problem with being called “chicken,” Doc’s fascination with the Old West—and leave the feeling that we’re watching, not a trilogy, but one movie and its two-part sequel.)

Gaines is clearly a more ardent fan than I am, and his enthusiasm makes this book sparkle. He sifts through and synthesizes three decades of previously available information about Back to the Future with aplomb. He also breathes fresh life into his subject with facts and anecdotes from the five hundred hours’ worth of new interviews he conducted with as many of the franchise’s key players, from in front of and behind the cameras, as he could. I suspect the films’ devotees already know much about what Gaines covers—even as a casual fan, I knew, in broad strokes, about the casting swap-outs of Eric Stoltz for Michael J. Fox and Jeffrey Weissman for Crispin Glover—but they may not know all the details Gaines provides (for example, that Charlie Sheen and Johnny Depp were also, albeit briefly, considered to play Marty McFly).

They’ll likely learn some fun new trivia facts, too. Did you know there is debate about Principal Strickland’s first name? (And they say only Trekkies obsess over such things!) 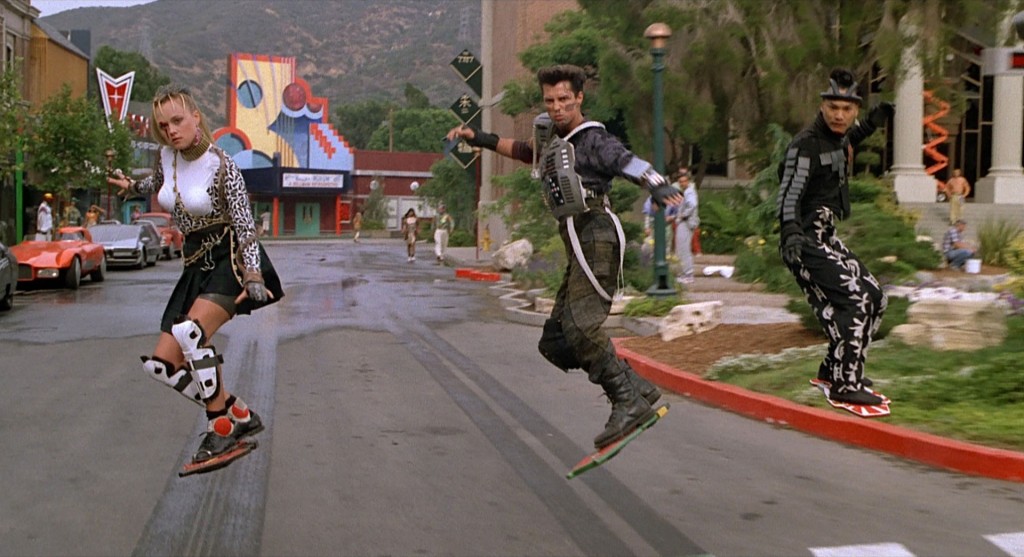 One aspect of the movies’ production I’d never known about was the accident that injured stunt performer Cheryl Wheeler. The climax of the hoverboard chase in Part II contains a fleeting glimpse of what was a gruesome catastrophe. Gaines offers a meticulous, mesmerizing account of what went wrong, when, and how. I felt disappointed and angry as I read about Universal Studios’ efforts to keep the accident quiet (they largely succeeded) and the way they initially tried to compensate Wheeler (the parties later settled out of court):

She filled out a workers’ compensation claim and was given $13,000 for her accident, barely enough to make a small dent in the mountain of bills she had acquired while recuperating and unable to take another job. At the time of her incident, the stuntwoman was at the top of her game, earning a quarter of a million dollars annually… Now her career was being sold back to her at a drastically reduced rate.

Gaines also includes Wheeler’s current, philosophical outlook on the situation: “Life is just that good and just that bad.” This harrowing chapter will forever change how you hear the question, “Where’s those hoverboards we were promised?” 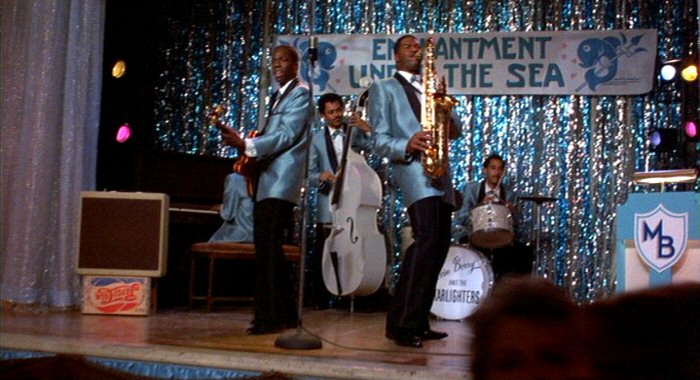 Behind the Music of Back to the Future

Not every aspect of the films’ production gets as much attention as I would have liked. For example, Gaines has next to nothing to say about composer Alan Silvestri’s magnificent orchestral score. (Perhaps there isn’t much to say, but I doubt it—film score aficionados would find almost any behind-the-podium info fascinating!)

He does, however, include the enjoyable story of how Huey Lewis and the News contributed “The Power of Love” (Best 80s Movie Song Ever) and “Back in Time” (Best Time Travel Pop Song Ever). And he includes intriguing perspectives from Harry Waters, Jr., who played Marvin Berry—Chuck Berry’s fictional cousin—in the first two films. Waters says he understands and is even “pleased” that ZZ Top replaced the Starlighters as source musicians in Part III: “there was no way they could write [five black guys] into the Old West.” But given the writers’ abundant creativity in other aspects, I wonder whether Waters is right. He says the writers tried; I wonder whether they tried hard enough.

I was also struck by Gaines’ speculation about why Chuck Berry was slow to give the filmmakers permission to use his hit song, “Johnny B. Goode”: “maybe the rock ‘n’ roll pioneer had a problem with the film’s revisionist history, a white teenager inventing rock and black musicians just copying his lead.” The iconic scene of Michael J. Fox rocking out on an electric guitar (“a cherry-red Gibson ES-345… that wasn’t made commercially available until three years after the dance takes place”) never struck me as anything but a clever riff on the bootstrap paradox—but Gaines’ hypothesis seems a reasonable objection, and might have occurred to me were I not a white male.

If you enjoy any or all of Back to the Future films, Gaines’ book is required reading. It will only make you enjoy the movies that much more.

It made me appreciate Part II and Part III more than I did, and it reminded me of why I hold the original film in such high regard. Back to the Future takes the high sci-fi concept of time travel and makes it urgently personal. It isn’t really a Star Trek-like story about “preserving the timeline” (although at points it resembles that). And it isn’t really an alternate history that speculates for the sheer fun of it (although at points it resembles that, too). It’s a story about, as Lea Thompson tells Gaines, “how having courage in a single moment can change your life.” And it’s a story about love changing the future for the better.

Why are you a Back to the Future fan? Let’s talk in the comments!