Twenty-five years ago this week, Star Trek: The Next Generation (TNG) brought us “Reunion.” The episode was the next chapter in the series’ saga of Klingon honor and betrayal, shame and redemption that started in season three’s “Sins of the Father.”

TNG was rapidly maturing in November 1990. Its plots were growing more sophisticated and its characters more textured. “Reunion” exemplifies this trend, and holds up extremely well, not just as Star Trek but as a compelling hour of drama.

Here are five reasons you should rewatch “Reunion”—or check it out for the first time—as it celebrates its silver anniversary:

In only two episodes of TNG, Suzie Plakson breathed life into one of the most dynamic Klingons in all of Star Trek. She established K’Ehleyr as strong, smart, sardonic and sexy in season two’s “The Emissary.” In “Reunion,” she fleshes out the character even more fully, showing us a mother who is both tender toward her son and a resolute advocate for him.

“If you cannot be his father, at least be his friend.” — K’Ehleyr to Worf 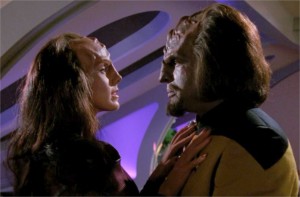 Half-human, K’Ehleyr regards Klingon duty and honor with a critical, corrective eye. She can appreciate that culture’s strengths, but is quick to puncture its pretentiousness and cut through its hypocrisy with insight sharper than any blade.

When Duras kills her, we feel the loss as keenly as Worf does, and want to join him in his howl of grief. It’s a shame K’Ehleyr met her end so soon. Her two appearances suggest she could have become a compelling, continuing presence, and a fan favorite.

Although K’Ehleyr would not return, her son—and Worf’s—Alexander would become a familiar face on TNG. He is played here by a different child actor (Jon Paul Steuer) than in his other TNG appearances (Family Ties’ Brian Bonsall took over the role), but the conflict that comes to characterize his relationship with Worf is clearly established.

“I don’t want to be a warrior.” —Alexander 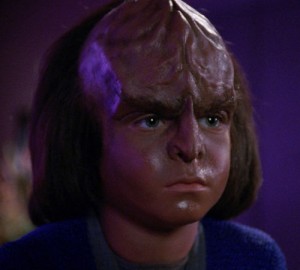 Alexander’s struggle to “find his own ways,” as K’Ehleyr says he will, resonates with anyone who’s had to disappoint or defy parental expectations in order to forge her or his own path through life.

Worf’s struggle to accept Alexander may also hit home for some viewers. Worf is able to disregard his undeserved disgrace among Klingons in order to embrace Alexander as his son, but can’t bring himself to keep him aboard the Enterprise. Since the ship already carries children, it’s not a question of logistics; Worf decides he cannot give Alexander a home, and sends him to live with Worf’s human foster parents. Maybe it’s the right decision. Worf is the Enterprise’s security chief, meaning his duties are more perilous than most. On the other hand, maybe Worf simply isn’t giving himself enough credit. His capacity to love his son, clearly evident in the warm embrace they share at the episode’s end, is larger than he’s giving himself a chance to discover.

Still, keeping children with their biological parents isn’t always the right choice. And navigating the parent-child relationship can make wielding a bat’leth look easy! Alexander and Worf’s complicated connection to each other will provide grist for several more episodes of not only TNG but also Deep Space Nine.

Brannon Braga shaped “modern Trek” (1987-2005, from TNG through Star Trek: Enterprise) like no other writer, second only to Ronald D. Moore (another of this episode’s four credited authors). According to Larry Nemecek’s TNG Companion, Braga was a summer intern on the show when he helped “hash out the teleplay.” By the next season, Braga would be a full-time staffer. He’d go on to write or co-write 20 TNG episodes as well as Star Trek: Generations and Star Trek: First Contact (he set humanity’s first meeting with Vulcans in his birth town of Bozeman, Montana); write extensively for and eventually serve as executive producer of Star Trek: Voyager (he proved instrumental in Seven of Nine’s development—and dated the actor who played her, Jeri Ryan); and co-created Star Trek: Enterprise. The Star Trek franchise would be quite different—and much diminished—without his creative contributions, which begin here.

Those eyes! Those, wide, wide eyes! Robert O’Reilly brings a simmering, sometimes barely suppressed, berserker-like energy to the role of Gowron. I get the sense Gowron is a dormant volcano of fury and pride who could blow at any moment. The venomous loathing and mockery he packs into his rival Duras’ name is by itself intimidating (and impossible to convey in print without typing a curse word).

“You will die slowly, Duras.” —Gowron 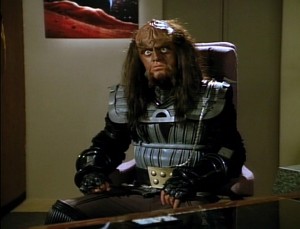 In “Reunion,” Gowron functions largely as a red herring. His secret sidebar with K’Ehleyr is supposed “evidence” that he has poisoned Chancellor K’mpec in an ambitious bid to seize power. Fortunately for Star Trek viewers, Gowron is innocent—of that deed, at least!—and returns a dozen more times (between TNG, Deep Space Nine and video games) to develop into another exceptional Klingon character. But even if he’d he only appeared in “Reunion,” Gowron would have left a lasting impression. As O’Reilly said in a 2012 interview, “You knew right away that this guy was totally different from every other Klingon.” 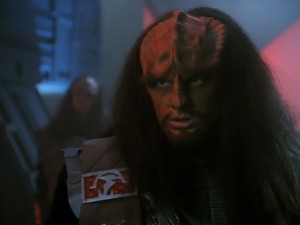 Well within “the boundaries of Klingon law and tradition,” Worf kills Duras in retribution for Duras’ murder of K’Ehleyr. Before he leaves the Enterprise to slay his enemy, he removes his communicator badge—a symbolic acknowledgment that he is temporarily abandoning one moral code for another, one not far from the “life for life, eye for eye, tooth for tooth” commandment of Torah (Exodus 21.24).

Dramatically, Worf’s act is powerful and shocking, but it’s not the first time he’s killed an enemy. In season three’s “The Enemy,” Worf refused to give a blood transfusion that would have saved a Romulan prisoner’s life. That script caused consternation among TNG staff and fans alike; not “Reunion.” What’s the difference?

What can Christian Star Trek fans make of Worf’s action? We might say that Duras’ death feels like justice. Duras has already ruined Worf’s standing within the Klingon Empire by framing Worf’s father for the Khitomer massacre; now, Duras has robbed Worf of a woman he loves, and their child of his mother. The Old Testament law demands a severe reckoning for the shedding of human blood (Genesis 9.5-6). Ancient Israel’s sages warned that, in the pattern of wisdom God wove into the world, evildoers meet evil ends:

The iniquities of the wicked ensare them, and they are caught in the toils of their sin.

They die for lack of discipline, and because of their great folly they are lost.

Jesus himself said “all who take the sword will perish by the sword”—but he said that while commanding Peter to put his sword away (Matthew 26.52)! He commanded us to love our enemies, and the apostle Paul commands believers to leave the execution of ultimate justice to God (Romans 12.19).

Like Captain Picard, Christian Star Trek fans may not be able to approve of Worf’s deed, while still being able to share his pain. And sharing the pain of those who grieve is no small part of loving our neighbors. We are called to “weep with those who weep” (Romans 12.15), and “to console those who are in any affliction with the consolation with which we ourselves are consoled by God” (2 Corinthians 1.4).

What do you think about “Reunion”? Leave a comment and let’s talk Trek!

Read my review of “Sins of the Father.”

2 comments on “5 Reasons to Reunite with “Reunion” (Star Trek: The Next Generation Retrospective)”