The Gungans’ big boss is an unlikely reminder of what God is and isn’t like. 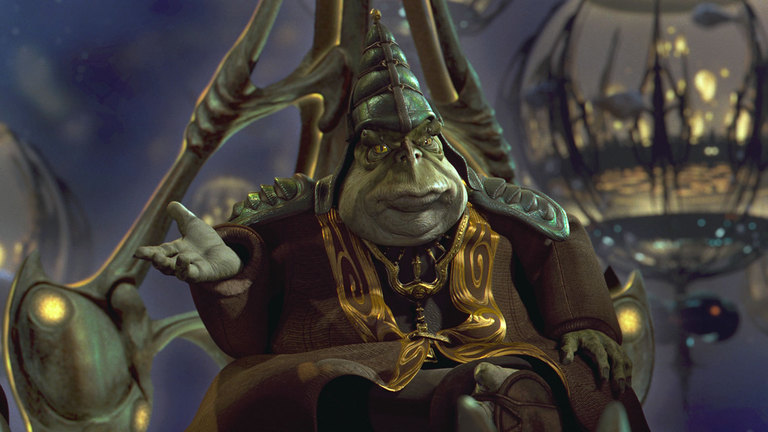 O Adonai and Leader of the house of Israel, who appeared to Moses in the flames of the bush and gave him the law on Sinai: Come, and with your outstretched arm redeem us.

The Gungans get a lot of grief from some Star Wars fans. I’ve given them some myself. But I like Boss Nass. Brian Blessed’s voice performance is one of the best in the whole saga, and I’m awed by each drop of computer-generated saliva spewing forth from the big boss’ lips.

And his gravitas! I believe this massive, richly robed, booming basso profondo is a leader and lawgiver. He speaks cartoony creole, but he’s no fool. When he declares, through a toothy grin, that Jar-Jar Binks is “to be poon-ished,” you know he’s serious. He’s laying down the law in bombad style.

When God spoke divine law to the Israelites from Sinai’s fiery summit, “they were afraid and trembled” (Exodus 20.18, NRSV)—not unlike Jar-Jar quaking before Boss Nass. It wouldn’t be the last time God’s people shook at the prospect of heavenly judgment. They, like Jar-Jar, would endure exile as punishment for transgressions.

Boss Nass welcomes Jar-Jar back to Otoh Gunga once Jar-Jar proves himself worthy to return. But God woos and welcomes us back from exile in sin while we are still sinners.

So in Advent, we pray for our Adonai—our Master, Ruler, Lord—to come again, for he is the Lawgiver who has borne the Law’s penalty for us in love. God in Jesus Christ “waits to be gracious to [us]; therefore he will rise up to show mercy… For the Lord is a God of justice; blessed are all those who wait for him” (Isaiah 30.18, NRSV).

How have you experienced God’s justice and God’s mercy in your life?