In his 1983 television special Star Trek Memories, Leonard Nimoy said NBC chose “The Man Trap” as Star Trek’s first-aired episode (it was the fifth produced) because network executives thought it was “‘proper’ science fiction, with a ‘proper’ monster threatening folks.”

“The critics didn’t like us,” Nimoy said, “and rightly so.”

Not so fast, Spock!

While most of the buzz around Star Trek’s golden anniversary is celebrating the franchise as a whole, and rightly so (including the countdown list J.W. Wartick and I collaborated on this week), today is the perfect—one might even say, logical—chance to revisit “The Man Trap” at 50.

Did it serve as a strong beginning for Star Trek? And does it still hold up a half century later? 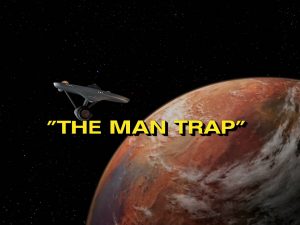 In case you haven’t seen the episode recently, or ever:

The Enterprise arrives at rocky, ruin-strewn planet M-113 to pay a “house call” on archaeologist Robert Crater and his wife, Nancy—“that one woman” from Dr. McCoy’s past whom he loved, lost, and never forgot. But the mysterious deaths of two crew members—their faces now marked by bizarre red mottling, and their bodies completely depleted of salt—change a routine mission into a murder investigation.

Unbeknownst to anyone but Crater, “Nancy” is actually a shape-shifting creature who survives on sodium. The creature, “the last of its kind,” took the form of the real Nancy after she died years before, and has been Crater’s companion ever since.

Wearing one of its victim’s forms, the creature comes aboard the Enterprise. Suspense and death, including Crater’s, ensue. In the end, Kirk and Spock, intent on destroying the alien, corner it in McCoy’s cabin:

First things first: Not even the golden glow of Star Trek’s 50th anniversary can hide the fact that this episode is far from perfect.

The fact that not one single member of the Enterprise crew thinks to offer the creature salt except as bait is an inescapable, inexplicable, inexcusable plot hole.

Is sodium chloride such a scarce commodity in the 23rd century the Federation can’t spare the occasional salt lick to keep this “salt vampire” alive, especially given that it’s likely the last of its kind? (You never know, some may have gotten off-planet, as this one does…) 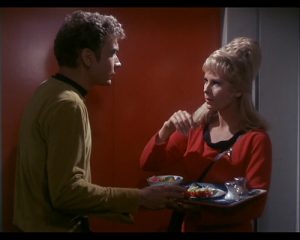 None of our heroes display any curiosity about or compassion for the creature. In fact, when, in the guise of McCoy, it suggests it could simply be fed salt without tricks, Spock makes the assertion (a remarkably cold-blooded one, even for an ostensibly emotionless character), “Your attitude is laudable, doctor, but your reasoning is reckless.”

Kirk accuses Crater of having protected the creature for selfish reasons, but it’s Kirk—who allows his desire to punish the creature for killing his crew—who emerges as less than admirable. I wonder whether Crater, in the end, offered himself willingly to it, since the Enterprise crew was intent on killing it—and whether it finally reveals its true form as a way of begging for swift death.

Contrast “The Man Trap” with “The Devil in the Dark,” later in this first season, to see how much more faithfully that episode embodies Star Trek’s ideals of mutual understanding and peaceful co-existence. Or remember Spock’s words in Star Trek IV (words his younger self, here, needs to hear): “To hunt a living creature to extinction is not logical.”

But I still maintain:

As first impressions go, Star Trek could have made a much worse one.

Not a Bad First Trek At All

For the time being, here are 7 points in its favor.

Sure, it’s painfully obvious M-113 is a soundstage (dig those multiple shadows), but the scenic design is imaginative and evocative. The soundscape goes a long way toward establishing an exotic atmosphere, too—the low howl of the wind (as though it’s mourning the death of the planet’s creatures); the soft chimes, always just on your hearing’s horizon. Every week in his opening narration, Captain Kirk promises “strange new worlds.” This first week, Star Trek certainly delivered.

2. The diversity of the Enterprise crew

Watch the scene in which Sulu calls General Quarters. We see a diverse crew bustle through the corridors: men and women of several ethnic backgrounds, wearing more than one style of uniform. And when Uhura decides the Swahili-speaking man she met must have been the creature, she tells Yeoman Rand, “I would have remembered a crewman like him”— because he matched whom she thought of when feeling lonely, not because he was black. Diversity is simply a given aboard the Enterprise.

This episode helped establish the Trek tradition of first-rate guest talent. Both Jeanne Bal and veteran stage and screen star Alfred Ryder (he once understudied Laurence Olivier) deliver compelling performances—she, as the understandably frightened and increasingly desperate sole survivor of her species; he, as a supposedly belligerent, single-minded scientist who is revealed, as the hour progresses, to be philosophical and compassionate. Bal in particular makes small but significant choices in bringing her character to life; note, for instance, the way “Nancy” caresses McCoy’s face at several points, foreshadowing how we will see the creature attempt to “feed” on Kirk in Act IV. 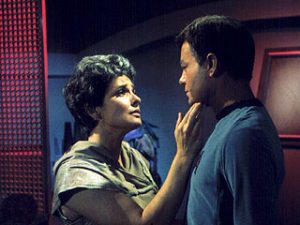 4. The “Triumvirate” Front and Center

That’s what they were often called in 1970s and ’80s fan writing about the show: the Big Three of Kirk, Spock, and McCoy. Each man enjoys substantial attention over the course of the hour. We glimpse the depth of Kirk and McCoy’s friendship, and we hear (from Uhura) that Kirk is “the closest thing [Spock] has to a friend.” These aren’t generic placeholders, but people with real emotions—even Spock (who flirts with Uhura! The 2009 movie didn’t pull that pairing from nowhere!) (Frankly, supporting players Uhura, Sulu, and Rand get better moments in “The Man Trap” than the second-tier cast usually does; early Trek episodes anticipated the ensemble feel The Next Generation would perfect.)

Yes, “The Man Trap” is a “monster” story, but it’s one with a solid science fiction center. How might the last member of a truly alien species adapt to ensure its survival? Wah Chang’s design for the “salt vampire,” with its disheveled appearance and deep-set eyes, conveys not only menace but also melancholy. It has become a minor pop culture icon (a version of the vampire even came close to appearing in the 2009 Star Trek, and it appears in this year’s Hallmark “Magic” Star Trek Christmas ornament!).

True to Trek form, “The Man Trap” prompts some intriguing questions, if we’ll let it.

Is the monster the real trap, or is nostalgia? (he asked, not unaware of the irony on the 50th anniversary of an old TV show). “You have such strong memories of me,” “Nancy” tells McCoy as she seeks refuge. Although McCoy acknowledges, early on, the human tendency to idealize the past—“Granted, I may have been seeing her through a romantic haze”—even he is not immune to the creature’s talent for exploiting its prey’s memories. The creature is described as having a “hypnotic or paralyzing power,” an apt description of how our past can have a detrimental hold on us when we don’t keep it in proper perspective. Some nostalgia is natural, even healthy. But if we’re not careful, our “strong memories” can drain us of clear insight, strength, and purpose as surely as the M-113 creature saps its victims of salt. Sometimes we must simply “pull the trigger” on it, as McCoy does, to ensure our safety and the safety of those for whom we care.

Another question to consider: What responsibility, if any, does humanity bear toward other, endangered life forms? The M-113 creature is posited to be “the last of its kind,” acting as it does simply to stay alive; yet no one apart from Crater and the creature itself seriously entertain thoughts of preserving and protecting it. When Crater asserts there is “no difference” between the creature and the buffalo, Kirk retorts, “There’s one difference: it’s killing my people.” Humanity’s right to life takes precedence over all other concerns—a position unusual for Star Trek. It’s a position at odds with Christian faith, too. God gave human beings “dominion” over other animals—not a license to dominate or destroy them (Genesis 1.28). By their very existence, God’s other creatures offer God praise, and we dare not casually silence their choruses. 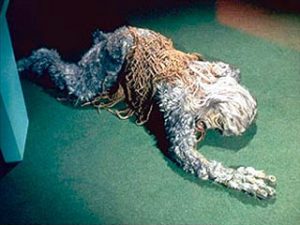 (Incidentally, the North American bison still lives, mostly within the boundaries of Yellowstone National Park. It was, however, extinct east of the Mississippi by 1883. “Buffalo Tales: The Near-Extermination of the American Bison” by Shepard Krech III, available to read at the National Humanities Center website, provides a solid introduction to these magnificent creatures’ story.)

Anyone watching “The Man Trap” at 50 will see it lacks the high-minded philosophy that animates the very best Star Trek. It does, however, remains a suspenseful and entertaining introduction to Star Trek’s characters and their world. Certainly, it hooked enough viewers a half century ago tonight that Trek, while never a ratings powerhouse, eventually managed to live long and prosper.

Which is more than we can say for the salt monster. 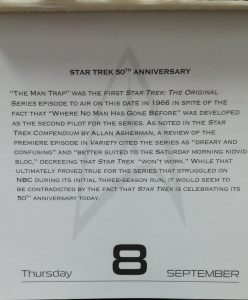 I respect the late Leonard Nimoy a lot, but “The Man Trap” at 50 or any age is better than he made it out to be. It’s one of the episodes I’ve watched repeatedly, and I’ll be watching it again tonight, grateful that it got my favorite science fiction series off the ground.