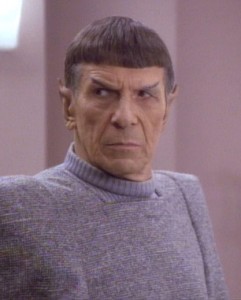 When Leonard Nimoy died two weeks ago, I felt sad, of course, as many did. I also felt surprised at the outpouring of grief, admiration and affection that flowed from the general public. I’d always thought only Star Trek fans appreciated what a fine actor and, from all accounts, good man he was. I was pleased to see and hear so many people quoting Spock’s famous line from Star Trek II (and 2009’s Star Trek, for that matter) to express their feeling that both Nimoy and his most famous character had been and always would be their friends.

I never had the chance to meet Nimoy, or see him at a public appearance. I think I’d have found myself too flustered had such chances presented themselves. As a teenaged Trek fan, I sometimes daydreamed about what having dinner with him would be like. I always imagined he’d do most of the talking, while I simply sat and listened, eagerly hanging on every word.

While I put Leonard Nimoy on too high of a mental pedestal to have ever thought of him as my friend, I have always felt on friendly terms with Spock. No one has ever displaced the Enterprise’s half-human, half-Vulcan science officer as my favorite Star Trek character—perhaps as my favorite fictional character, full stop.

I can’t exactly explain why. I’m nerdy about many things, including sci-fi; but real science isn’t one of them. I wish it were, but I hated biology lab, found chemistry class phenomenally boring, and only passed pre-calculus because our professor graded on a curve. So I never shared Spock’s keen, analytical insight into the sciences. I can’t really claim I related to Spock’s existential angst, either. I’ve never been Mr. Popularity, but I’ve always been lucky to have a few good, close friends who “get” me. I bonded over Star Trek with friends like that in middle school, so I associate watching the show, and watching Spock, with many memories of having fun with other people. 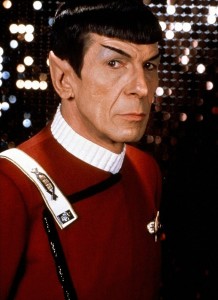 In fact, my best friend at the time and I even wrote a Star Trek story in which Mr. Spock, possessed by a malevolent alien intelligence, left Starfleet to become a stand-up comedian. (We called it “Day of the Rubber Chicken.” Die-hard Trek fans will get the reference.) When I entered Pocket Books’ Strange New Worlds contest for professional fan fiction in 1999, I only ever considered telling a story that starred Spock. For whatever reason, he was and continues to embody Star Trek in an essential way. I appreciate Kirk, McCoy, Picard, Data, Worf, Seven of Nine and many others—but, when it comes down to it, Spock is Star Trek to me.

So TNG’s fifth-season two-parter, “Unification,” excited me when it first aired in the fall of 1991. Spock had been mentioned in the third season’s “Sarek,” but his actual appearance in Trek’s 24th century was a Big Deal! It felt as though, in offering the Vulcan salute to Captain Picard/Patrick Stewart, Spock/Leonard Nimoy was conveying his blessing to TNG as a worthy successor to the original series. And when, in the first few minutes of Part II, Spock makes a brief and tantalizing allusion to the events of Star Trek VI (which wouldn’t hit theaters until December), it seemed the story was serving to “unify” Star Trek’s past and present as much as Spock was working to facilitate Vulcan and Romulan reunion. My college roommates and I cheered as we watched Star Trek achieve a grand sense of scale and history.

Rewatching “Unification” almost 25 years later, however, I find myself liking it far less, especially where Spock is concerned. I still love the fact that he’s present, but he doesn’t show up until the final seconds of Part I, an episode that is otherwise a plodding procedural that feels like padding. The Enterprise is searching for a stolen Vulcan starship. They search, and search, and search some more. Meanwhile, Picard and Data get ready to infiltrate Romulus, disguised as Romulans. See them get ready. Get ready, Picard and Data, get ready! “Unification” could and should have been a one-hour episode, not a shameless two week-long ratings-grabber.

Spock’s real entrance, in Part II, is electric; but that episode’s energy soon ebbs away. Most of the “action” takes the form of conversation in a Romulan senator’s office. Spock’s big “adventure” with Picard and Data is a lot of talking. Now, some of the talking is well-written. Consider this exchange, between Sela (Denise Crosby as Tasha Yar’s human-Romulan offspring, thanks to timey-wimeyness in “Yesterday’s Enterprise”) and Data. Sela is drafting a speech she intends to make Spock read in order to trick the Federation into letting Romulan vessels cross the Neutral Zone and conquer Vulcan.

SELA: I rather enjoy writing. I don’t get to do it often in this job.

DATA: Perhaps you would be happier in another job.

Brilliant! A line so good, in fact, it should have gone to Spock!

Spock does get a good line earlier in the episode. It’s the moment that perhaps helps me clarify why I’ve always found Spock so fascinating. As he and Picard are waiting in a café to meet with Spock’s contacts in the underground movement working for rapprochement between Romulans and Vulcans, the captain expresses doubts that “this movement is strong enough to reshape the entire Romulan political landscape.” Spock, who still holds a bloom he has been given as a signal from his friends, fixes Picard with an intense gaze and says, “One can begin to reshape the landscape with a single flower, Captain.” 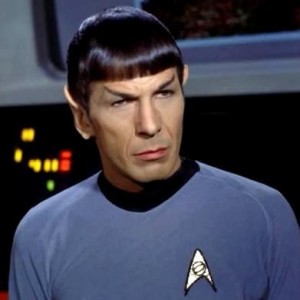 Spock embodies Star Trek because he embodies hope. In his own person, he lives the hope that humans and extra-terrestrials can not only live with but even love each other—translated into real world terms, that we human beings (who are, so far as we know and at least for now, the only show in town) might learn someday to get along with each other. By his presence aboard and integral value to the Enterprise and her crew, he witnesses to the hope that we will recognize each person’s unique value and honor their gifts—the Vulcan philosophy of IDIC, Infinite Diversity in Infinite Combinations. And in his logical refusal to ever yield to despair, he practices the hope that “there are always possibilities” (as Kirk quotes him in Star Trek II). His work for the reunification of Romulans and Vulcans is an eminently logical development for the character. It does not bother him in the least that the great work must have a small beginning. 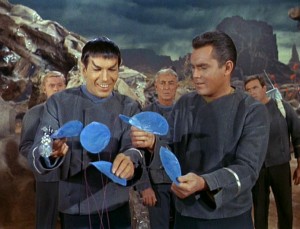 Can’t Spock’s hope, signified by that single flower, be a parable for us of the Kingdom of God? Jesus taught that God’s reign will be realized, at first, in small ways; that it can be compared to a small amount of yeast that ultimately leavens an overabundance of bread, or a tiny mustard seed that finally grows into a towering tree in which the birds nest (Luke 13.18-19). The signs of God’s presence and power in our world today may be fleeting and fragmentary, but they are no less real. We dare not despise the day of small beginnings (Zechariah 4.10), for, if we do, we may miss seeing a single flower from God begin to reshape the whole landscape of life.

If Spock had hope that motivated him to act for change, we have more, trusting as we do, not in ourselves, but in God. Hope, born of Christ’s Resurrection, that God will reshape the whole landscape of life in the new heaven and earth does not give us permission to do nothing until that reshaping takes place! “Last things do not take place on earth,” wrote the Reformed theologian Karl Barth, “and yet why should not little things and even great things do so?”

In other words: Why should we not plant those single flowers, here and now?

Or, as Spock in his hope might chide us, “To fail to do so would be completely illogical.”

I don’t always feel hopeful looking at the world, or at my own life. But Spock reminds me, and Christ empowers me, to look for those potentially landscape-reshaping flowers, and to plant some of my own, as often as I can, as purposefully as I can. God knows—literally, God knows—there always are possibilities!

Image of Sela finishing up her speech found at Bob Canada’s BlogWorld, http://bobcanada92.blogspot.com/2013/08/yet-another-thing-star-trek_31.html.