Star Trek turns 50 this week! And The Sci-Fi Christian’s resident unrepentant Trekkie, Mike, has teamed with up J.W. Wartick, author of the Always Have a Reason apologetics blog and fellow Trek fan, to celebrate.

Through September 8, J.W. and Mike will be cross-posting their 25 personal favorite moments from the length and breadth of the Star Trek franchise. From the original series to the Kelvin timeline, these 50 moments in total are among the highest highlights Trek has to offer. Some are iconic scenes that show Trek’s true heart. Others have special resonance for Christian Trek fans. Still others are just a whole lot of fun.

We hope you enjoy counting down to Trek’s golden anniversary with us!

Didn’t you get the memo? Today is Star Trek IV day! No, not really—but 2016 does mark not only Trek’s 50th anniversary, but “The One With The Whales”’ 30th. No fewer than three moments from the film show up on J.W.’s and my lists today. Remember, we made our lists independently, so today is a real testament to Star Trek IV’s success and staying power—not just as a piece of comedy, but as a statement about our responsibility, as human beings, to be better stewards of God’s good creation.

Ro Laren had been in and out of TNG for several episodes, and her Bajoran roots linked her plot with what was happening on DS9. Here, we see her go from favored protégé of Picard to betraying his trust to follow what she feels is the greater good.

Pressed into medical service after catastrophe strikes the Enterprise (as it does), Worf makes ready to set a crewman’s broken leg with this blunt assessment: “This will hurt. Prepare yourself.” Afterward, he praises his patient: “You bore that well.” A pitch-perfect note of character-based comedy, at which mature TNG excelled.

Though we may not get as much of the story as we’d like, fans finally got to see the return of Voyager to, approximately, home. The whole premise of the show was based on the culmination of this event, and the payoff is emotionally captivating.

It’s hard to pick a favorite funny scene in a film full of them, but Scotty’s (admittedly unrealistic) ignorance of a 1980s computer—”The keyboard; how quaint”—is always a contender. The scene is also the template for Spock Prime’s “invention” of transwarp beaming for Scotty in Star Trek (2009).

Picard must relive moments of his life that he would like to change as Q guides him to the realization that those choices made him who he was. The best part: when he ends up a blue shirt, he immediately demands death instead of continuing as a lowly science officer.

Ricardo Montalban’s performance as an older, crazier Khan so riveted me, I memorized much of it, including this scene. Montalban swings from nostalgic bitterness (“On Earth… 200 years ago…”) to unbridled outrage (“This is Ceti Alpha Five!”) All memories of Mr. Roark evaporate; here is the Trek films’ greatest villain.

Kirk asks a punk on the bus to turn off his boombox; in response, the punk turns it up. So Spock shuts him down and the bus applauds. This is one of the most memorable moments in all of Star Trek, in my opinion.

A cathartic moment that restores order to the recently chaotic Trek universe. The unveiling of the new Enterprise, to the strains of Alexander Courage’s fanfare, is arguably the franchise’s first overt acknowledgment that (as Roddenberry’s own, unused lyrics to the old theme say), this “star trek will go on forever.”

Riker must try to demonstrate Data is not a person, and does so by taking an arm off… he thinks. But Picard’s case comes out on top and Data is demonstrated to be a person with all the rights that entails. It’s a suspenseful, heartwarming moment early in TNG.

Gene Roddenberry faced the unenviable “no-win scenario” of needing to air the show’s unsold, radically different first pilot episode in order to fill out TOS’ first season. His solution was elegant, enveloping it in a frame story that instantly gave the Trek universe a “pre-history” and Spock a richer backstory. 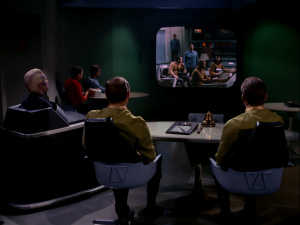