Star Trek turns 50 tomorrow! And The Sci-Fi Christian’s resident unrepentant Trekkie, Mike, has teamed with up J.W. Wartick, author of the Always Have a Reason apologetics blog and fellow Trek fan, to celebrate.

Since September 4, J.W. and Mike have been cross-posting their 25 personal favorite moments from the length and breadth of the Star Trek franchise. From the original series to the Kelvin timeline, these 50 moments in total are among the highest highlights Trek has to offer. Some are iconic scenes that show Trek’s true heart. Others have special resonance for Christian Trek fans. Still others are just a whole lot of fun.

We hope you enjoy the penultimate day of our countdown to Trek’s golden anniversary!

One theme that shows up a lot today’s choices is the power of the past. The choices we’ve made and the choices made by others shape our lives. From the fictional fallout from Cardassia’s occupation of Bajor to the bitter, real-life legacy of societal racism the U.S. struggles with still, Star Trek teaches us that past choices have consequences, for better or worse, for our present and future. But it also affirms that new and better choices remain real possibilities.

One of the most poignant scenes in TNG is the Klingon High Council all turning their backs on a lonely Worf in the middle of a circle. It’s a radically unfair moment that contrasts Worf’s true honor with the subterfuge of his rivals.

Yes, really. Kirk shows us the importance of iconoclasm—challenging false gods—with this wonderful question. He may not believe in God, but he at least knows enough to “test the spirits” (1 John 4.1). Not every claimant of our ultimate trust, obedience and worship is deserving. Discernment is demanded.

The Cardassian/Bajor conflict was apparent all through DS9 and certainly parts of TNG as well, but here it comes into true focus in beautiful ways rarely explored on Star Trek. It remains one of the better episodes of Star Trek across all series. 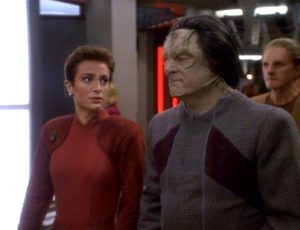 Kirk relies on his intelligence, ingenuity and mercy to survive, refusing to kill the Gorn he earlier wanted to destroy. He proves to the Metrons’ satisfaction (but not Spock’s) that humanity is “a most promising species.” One of the classic series’ most iconic and memorable hours, and deservedly so.

The latest Trek movie has all kinds of fun moments, but the self-referential humor of blowing away an invading fleet with music that hearkens back to the first reboot film tops them all. Tune into a modern classic to fight baddies.

In a day when science fiction on TV often meant scary monsters (as in TOS’ own first-aired episode), Trek challenged the idea that the unknown, the alien, the “other” must, by definition, be the enemy. Innovative costuming and Nimoy’s empathetic acting sell the series’ most memorable moment of first contact.

Picard must try to reconcile with his brother back home in France as viewers get not only a tantalizing look at life on Earth in the future, but also an education in what’s important. Hint: it’s the episode title.

Trek’s most direct assault on racial bigotry remains too timely in 2016. Sisko, in a Prophet-induced vision, learns the dangers of being black in 1950s America. It’s also one of the franchise’s most stirring affirmations of hope’s power: “You can pulp a story, but you cannot destroy an idea!”

“Emissary” was a rare moment for me- a pilot episode of a Star Trek series that was genuinely amazing. Sisko’s backstory was intriguing, all the other characters gave hints of potential, and the tension was ratcheted up with the discovery of a wormhole.

While Trek’s theology of immortality (living on in others’ memories) offers less hope than the Gospel, Tasha’s memorial shows the power of ritual and the necessity of community when coping with grief. Ron Jones’ score sings with heartbreak but also, as if by grace, healing. Season one’s most beautiful moments.